Dear all,
I need some more explanation if I’ve understood the new function of “closed roads” (Baustelle 500m etc.) correctly.

For sure I’ve understood if I’m on a tour and reaches a closed road I’m able to acitivate this “closed roads” button via the arrow on the left /upper side. But I have to be directly there? I’m not able to change the route and use this function in advance?

Today this happened:
I wanted to plan a new route in the App for a short tour tomorrow. Normally I’m planning on the website and afterwords I’ve tested it also.
As I was looking for the correct adress I did my searching on google maps. There I’ve seen that a part of my route (B13 at Fahrenzhausen) is closed, I think they’re working on the bridge. 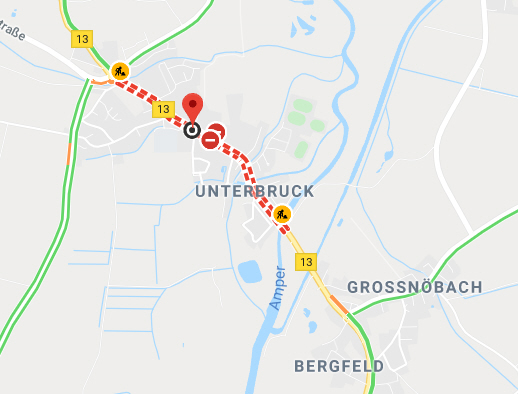 Afterwords I changed to kurviger App.
There I wanted to use the new function for closed roads, but I was not able to say kurviger that he should avoid the B13. Activating this button only changed the route here at the beginning.
In other words: is it possible to use this function with the opposite meaning of a intermediate-point - something like “avoiding this point”?
It would be nice not to react tomorrow beeing directly before this closed road and to optimize the route today at home.

For sure I’m able to find a new route with an additional new point not to touch the closed road, but in unknown areas I don’t know what’s reasonable there and on the other hand where are the best, most curvy alternative routes.

Is there any other function I’ve not realised to optimize this problem?

Thanks for further explanations.
Best regards

Do you mean conditional restrictions (experimental in website) discussed at below topic?

Some roads which are quite popular for motorcyclists like the Kesselbergstraße are restricted for motorcycles on certain weekdays. It would be great if Kurviger would consider these restrictions when planning a tour. The user would have to enter his start date and time, of course. Do you plan to support the conditional restrictions?

I’m not sure, because the conditional restrictions is only for “motorcycle forbidden”, isn’t it?
And it’s a fixed list, not variabel?

I’ve the problem of closed roads because of some construction topics and less than 3months, so it’s not marked at the OSM map.

I am happy to report that such an overlay feature was just added to the Kurviger website. The feature is still experimental. Please report your experience with this feature. [Screenshot%20from%202019-08-21%2018-54-35] In my experience so far, this feature works pretty good and can help to avoid conditionally closed roads a lot!

Yeah, but this includes conditional restrictions, mentioned in the OSM-roads.
As shown in my kurviger link and the actual googele maps OSM does not know that the road is closed because of reconstruction avtivities.
Therefore the other topic is not the same problem?
The topic is, that I would like to set the marker for closed road while planning the tour.
Is there any opportunity to realise this?
Best regards
juschka

As shown in my kurviger link and the actual googele maps OSM does not know that the road is closed because of reconstruction avtivities.

So instead mean how to set avoid areas on map during route planning?

That may come in the future, for now app offers avoid roadblocks during navigation:

So instead mean how to set avoid areas on map during route planning?

Yes exactly this would be my request

ok, could you please think about it - if it would be an idea for the future?
I think it could be interesting for an alternative routing option.
Thanks
BR
juschka

Thanks for the discussion @juschka10001. Regarding the conditional restrictions overlay feature, this only works if the OSM data is set correctly. Unfortunately, the blocked road is not tagged in OSM.

Hi boldtrt,
thanks for our answer.
But I don’t think that’s necessary to use only the OSM data.
The information could be from somewhere , also from newspaper or so.
It would be interesting to be able to mark a road “not to go there” and then the App or Webpage (on both systems) is planning a route around with other nice roads.
For example:
I know that on sunday there will be a “Almabtrieb” somewhere, or a “Leonardiritt” in a city - in such cases the road is blocked only for some hours. Such informations are named in radio or newspaper. Last time I was then marking another route around this city, but for sure I’m not sure if I’ve found the nicest possible trip. Kurviger tried to come back on this road through the city several times, and only by marking another road with 3-4 markers it has accepted not to go through the city.
Therefore I think it could be helpful in planning modus on website or APP to have such a function, before I’ll come to the blocked road while driving and have to recognize that it’s necessary to drive back or somewhere.
Thanks for your development on both systems!
BR
juschka