Since we have already discussed in English, please let’s continue in English so that all users can easily understand and participate. With translators many meanings are lost and fail to understand.

Don’t clearly understand what you mean here, there are several categorized Settings in app.
Those in Navigation category are relevant preferences specifically for navigation process and all Settings categories should be accessible anytime.

Hi,
wasn’t sure about writing in English. My experience in other Forums in Germany is that people complain, because they don’t understand. OK, will do!

That’s what I had in mind, too!

Something about the “etc.”
Situation: You drive in Navigation mode on your route and hit a road block. No signs for deviation, the sun is high and hot, on your sunglasses you can hardly see the display, contrast is low, you sweat like a pig under helmet and gloves. Almost impossible to modify the current route w/ new way points under such conditions on the small mobile screen, no mouse pointer, only your thick fingers… Hence you decide to make a U-turn, driving back to the last crossroad, hoping if you turn there at random choice right or left that re-routing will solve your problem. While you are driving back, the mobile keeps annoying you that you are driving in the wrong direction and that you should do another U-turn. In such cases Murphy is always around the corner, and in other Apps I had frequently the case that the re-routing was then driving me down into smaller and smaller streets, loosing completely my orientation and 10 min later the navigation has brought me to a point 500m behind the place where I did the 1st U-turn and where the road is still blocked. Another problem was that the re-routing decided about a new route to the next WP, which bypassed almost the complete original route segment. That’s usually the moment where you start screaming at the device and their developers.
What I am looking for is a 1 touch button in Nav-Mode telling the navigator that the road is blocked for x Km, (where x could be fix like 3 Km at a first implementation). A short term re-routing should then kick in and bring me around this road block back onto my old route x Km later. There must be caviates around this, because on Highways the Navigator should never tell you to make a U-turn, because this would be a security killer for your App.
Rgds
hk

wasn’t sure about writing in English. My experience in other Forums in Germany is that people complain, because they don’t understand.

Kurviger is a world-wide project and to make it easier for everyone to communicate it is preferred to write in English when being comfortable.

We had discussed that also in old forum here.

Indeed. @lve0200 you got the point. This is exactly what I wanted to ask for. A de-tour that will help me drive past the road blocks, construction sites etc.pp. Exactly that scenario as you describe happened to me 3 weeks ago
while riding to GAP. Normally one would hit “de-tour” and specify for how much meter/km the de-tour should be calculated. This is for example a nice feature of (recently discontinued) Navigon software.
This, together with the offline route calculation are for me the most important additions to the app as-is now.

Hi,
may I bring back this issue, again, or has it been solved and I didn’t notice it?

Recently was added the Skip next waypoint.

Until now I always did routing on www.kurviger.de and exported the route to my TomTom Go 730 navigation system. The TomTom has the great advantage of the function “Roadblock in 100 m”, so exactly the function mentioned here. I needed this function many times on our last few trips…

Is there a chance that this feature will be available in the next few month? It would really be great!
This feature (and offline routing) would definitely make Kurviger the best navigation app!

Is there a chance that this feature will be available in the next few month?

There is a chance :), but please note, we don’t provide ETAs for features.

May I ask how you use this feature? Is it mostly for construction sides? Is it something you would do when you parked the bike and took off your gloves?

As long as the chance lives, I’m happy

Thanks for the reply. I am not a Garmin pro but I used one a couple of times. I have never seen this button

. Is this only available on some devices or is this feature hidden?

It is standard on the TomTom Go 730, not hidden. Certainly also on other TomTom devices: 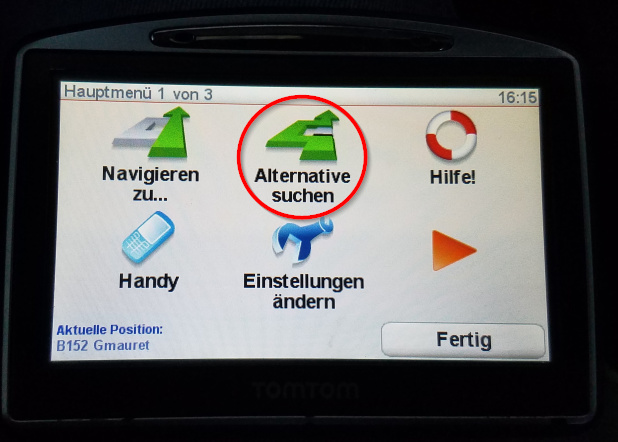 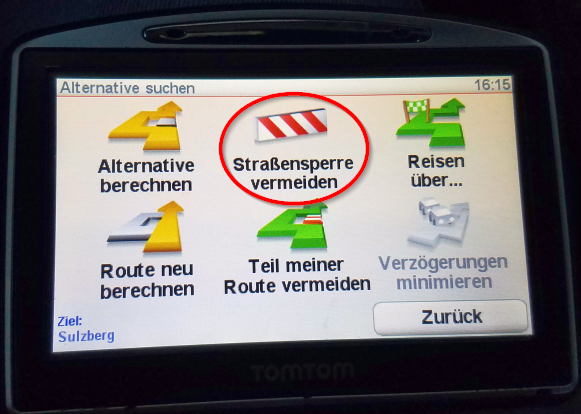 And then you can specify the distance at which the roadblock is located: 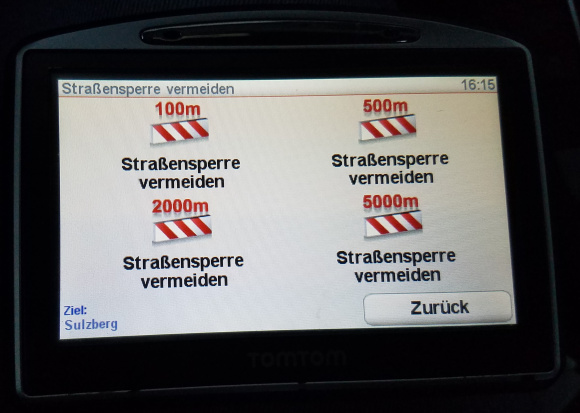 Thank you very much for providing further details about this feature

Coming back to this topic I wanted to ask if there is any timeline for this new function?
I had the problem also last week.
The road was blocked (working on the road for more than 3 weeks, but this will not be documented in the OSM maps). After driving away we lost the information where to go, no sign to help to find the correct way …and after a great turn of about 30km we came back exactly at the same point of the blocked road again

How could this be avoided - would the new function help in this case?

The idea would be to provide something like the images posted above.

It is in our list, when gets ready we’ll announce it here in the forum.

How could this be avoided - would the new function help in this case?

Alternatively can disable rerouting and use the new route indicator with direction arrow to help resume the route (its options are in “Settings | Navigation | Route indicator”).

No the arrow don’t helps if the route is going in a really large distance away from the origin way. Think that was also the problem - in 30km around we didn’t realise that we’re coming back on the same exit shortly before the blocking. the arrow helps in case of only one road in parallel or something like this, but outside a city the distances are mostly too far.
Ok, then let’s wait, I hope to get this new function soon.

Ok, then let’s wait, I hope to get this new function soon.

me too!, after waiting since almost 1 year 4it.
I may also add to it, because in villages, you don’t know, if during your search for a deviation, you may enter into a residential area with a maze of 1-ways and no exit.