My OLED display loves the Kurviger app a bit too much and shows it all the time because it burned in. As all new high-end smartphones come with OLED displays, I think the problem of burning in affects many users as leaving the display on at maximum brightness for hours while displaying an image with changeless parts is common when using the phone for motorbike navigation.

What I currently do to reduce the burn-in while navigating: I use Android’s screen pinning feature to pin the Kurviger app. Then, I can use the lock-button of my phone to turn the display on and off while riding. However, I always have to keep in mind when I might need the display again and if I turn it on too late, I miss a turn. It is also a distraction from traffic if you have to think about when you need your phone display all the time. If I want to use another app while having a stop, I need to unpin Kurviger first and then pin it again which gets annoying.
My phone is old and I take the burn-ins as a symptom of ageing, but I don’t want to image I had a brand new 1500€ phone and “broke” the display by just riding the motorbike on a few sunny days.
It is also quite difficult to find a high-end smartphone with a TFT display nowadays.

Inspired by this thread about turning off the display in order to save battery, I came up with some ideas to save the OLED panel’s lifespan.

Thinking a bit further, instead of making the entire screen go black in the situations listed above, the app could switch to a screen saver mode which does the following:

Maybe these features could go into the menu by the name “OLED mode” to make it obvious that it has no benefits if used on LCD displays.

I think a first step could be to implement that screen saver mode and just let the user manually switch between normal and screen saver by tapping the touchscreen anywhere. This would already help a lot and the options to switch automatically based on upcoming turns are “nice to have” if you have the resources in the future.

These are just some thoughts i put into the OLED issue, maybe you have better ideas. I would be very happy if this issue gets addressed at all.

Thank you very much for taking my idea into consideration.
I used Kurviger Pro for 10.000 km now and I really love it.
I hope these suggestions are a little contribution to making it even better

Thanks for the detailed suggestion.

My thoughts regarding in-app automatic handling of screen / locking remain the same:

App: Switch off the display while driving

So would need to examine all options when there are available resources in the future.

I just checked with my media players (simple gallery and VLC), and the minimum brightness there is not totally black but just very dark. But still, this way should also extremely reduce burn-in.

I don’t think locking the screen could be a solution because then it needs to be unlocked by the user again by typing the PIN as you can’t use face recognition or fingerprint if you wear a helmet and gloves.

Btw, Google Maps always put itself somehow above the lock screen while navigating. But this might be a privilege that only Google apps can have, I don’t know.

houghts i put into the OLED issue, maybe you have better ideas. I would be very happy if this issue gets addressed at all.

The OLED screen of my Galasy S9+ is full of burned in Kurviger Buttons.

I the meantime I don’t care any more, but for newer devices I also see the necessity for any kind of screen saving, maybe by moving pixels there and back after a period of time? Don’t know if this is feasible.

maybe by moving pixels there and back after a period of time?

This does not seem possible.
It seems more likely that it could be done by a specialized device app.

I could review if turn screen off / on is possible without device administrator permissions.
Or could make the app display black.

Honestly it’s an embarrassment that the system doesn’t do that internally by itself, when installed on such a device. This feels such a low level problem, should never be handled on the application layer

I think the idea of switching the display dark / off is very good.
That would save power for all those who want to / have to get by without an extra power supply. E.g. for a rental motorcycle.
The hiking and cycling app Komoot has also solved this somehow. There I can switch the display on and off with the power button without having to log in again.

It is true that I do not use an OLED screen on a motorcycle, but when I export videos from the Insta360 application on a tablet with OLED, I turn off the screen using this application:

Simulate screen off while running any app for OLED or AMOLED displays...

It is effective, working, configurable and free (although I decided to support the developer by buying PRO).

I don’t consider pixel-shift a solution as is doesn’t prevent burn-in, it just makes the edges of burnt-in areas blurry so that they appear a bit less obvious. As @Hobbyfahrer said, the displays with variable content already do some sort of pixel shifting just by the content changing and these are still burnt in. These burn-ins just appear like dark clouds on the display but the damage is clearly visible.

CRT displays had this problem. LCD then solved it nicely. OLED now brings this annoyance back. Technical progress? So sad.

See my answer above about what is possible and could be done in the future:

This does not seem possible. It seems more likely that it could be done by a specialized device app. I could review if turn screen off / on is possible without device administrator permissions. Or could make the app display black.

I just took this picture to complain about the new outlines causing burn-in in this thread, but I thought this is a good illustration why some sort of screensaver is neccessary.

This is my phone display showing nothing but full screen white at max brightness.
I manually turn off the display as often as safely possible but it still burned in like this. 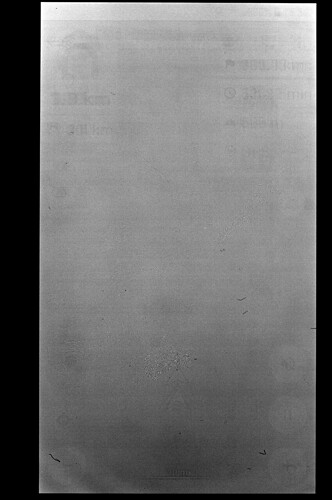 I tested the screensaver mode this afternoon going home.

It works fine, just some things that can enhance the feature.

As I know the route, there’s no problem, but sometimes could be useful to turn on the screen not just when you need to turn or take exits, also when kurviger announces it (for example at 2 km, 1 km, 500 meters as you can select). When there are a lot of lanes, sometimes you need some time to see which one you need to take.

When route is missed (I tried many times), kurviger screen is on (good for me), and when you return to route again, screen turns off again. I was on a parallel route and GPS position is nearly the same, so kurviger assume that you are on route again. Maybe in that situation, screen coud be turned on more time.

Just 2 ideas, not demands. As I use the phone charging, I usually don’t have power problems, but I’ve found this feature very interesting.

Thanks for the testing!

could be useful to turn on the screen not just when you need to turn or take exits, also when kurviger announces it

This could be done. However users can select the distances of voice guidance.
I started with a simple implementation and see which workflow is more needed.

(also avoiding to load the app with many options)

Maybe in that situation, screen coud be turned on more time.

I’ve see that respects the selected timeout. I’ve selected 5 seconds. I assumed that this timeout is used after a turn, but maybe is just used when screen is turned on after user touched and returned to route?

This seems quite small, if you want the screen to stay on for a while.

I assumed that this timeout is used after a turn, but maybe is just used when screen is turned on after user touched and returned to route?

So we just need to increase it. The behaviour after turnings will be the same than now. Perfect!