Sometimes, while driving, it happens that the screen turns 90 degrees for a few seconds. Of course, because I have automatic orientation set…

But I don’t want to block it in Kurviger or Android settings, because I like planning a route vertically and navigating horizontally (unfortunately, but geometry determines it). So maybe the option of blocking the current orientation only while navigating / following it would be useful?

2 posts were merged into an existing topic: Screen orientation options

How about automatically activating the rotation lock when you start navigation, and unlocking it afterwards? Maybe it could replace any other settings related to the screen layout.

I would appreciate such an option, too. Another possibility would be to extend the screen orientation setting that’s already present in the app so you can not only set it globally, but separately for navigation mode and non-navigation mode. Has anybody given this some thought yet?

I like the idea of automatically locking the screen during navigation or the follow mode. I find the manual screen lock too cumbersome, especially if you forgot to lock it before you put on your gloves.

Coming in next version.

When pause navigation the screen should be unlocked for convenience,
i.e. follow system orientation, until continue navigation again.

When pause navigation the screen should be unlocked

Cool, if that is possible.

Cool! Thanks! (One less task for Tasker)

I have activated the follow mode for the test, the screen orientation is not locked on my mobile phone. Or do I need to pay attention to something?

Hmm, I could not find any new settings, and screen orientation isn’t locked either. 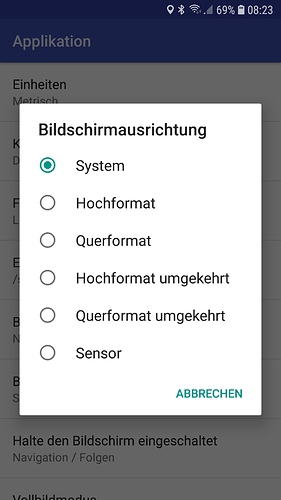 Thank you for the explanation.
It is working, but IMHO too many possibilities for the user to understand intuitively.

Would it be possible to have just one extra setting?

When starting navigation, app should “read” current orientation and then lock it until navigation is stopped.

Would it be possible to have just one extra setting:
lock current screen orientation during navigation/following

Community asked for more flexibility in screen orientation:
(there are 3-4 possible states, not only 2)

That’s what is offered and the 2nd choice is also the default,
so only the “Screen orientation” option need to be changed.
(like before)

Well, the functionality is ok.
But I doubt that people would understand, that this setting is actually correct: 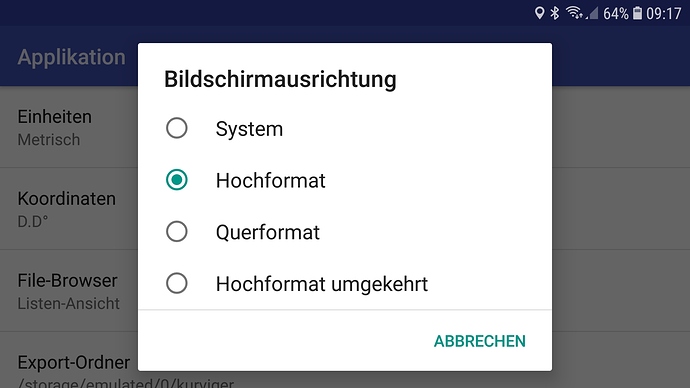 At least I needed your explanation above too understand.

But I doubt that people would understand, that this setting is actually correct:

There is nothing to understand, just select the preferred screen orientation like before.

Things are simple, screen orientation is not a boolean, but has 6 options.
So its application has 3 states and all these can be combined separately.

Now I understand how it works.

I have to select the screen orientation zb landscape and this is then locked in the navigation/follow me.

I think this could lead to confusion.

I think this could lead to confusion.

Why, what have you done so far?
Only screen orientation need to be changed (like before).

If you find the new setting confusing I can remove it from Kurviger!
But cannot change it, since we need to think the needs of all users.

Up to now my setting was System or Sensor, but the lock does not work with that. Perhaps these two should be removed?

Up to now my setting was System or Sensor, but the lock does not work with that. Perhaps these two should be removed?

So you use Android system settings and not select a lock.
How do you expect to work, unless select an orientation?

“System” is default and does not cause any trouble.
(like most users expect the app to work)