I have a question about the map orientation. The app tilts from horizontal to vertical allright, but only in 2 directions.

The google maps app for example, tilts in any direction.

Thanks for the interesting request!

We don’t have any orientation limits inside the app, leaving it to be rotated freely.

What device is it and which Android?

thanks for the swift reply !
It’s a motorola G6 plus with android 8.0.0.
I double checked and :

I think it would be helpfull to look into this, because sometimes its difficult to find a good smartphone mount, and added flexibility with the charging cable positioning could help some users.

I certainly note it for checking further!

@hanzani1 is 180 degrees rotation enabled on your device?
On my phone it is disabled by default (enabled are 0, 90, 270).
This setting is found in Settings | Display | Rotation.

yes it is, I checked. In my phone you have to choose between portrait or auto rotate.
otherwise it wouldnt work in google maps I suppose

Such system switches are global, they allow or limit rotation at their angles for the whole device and its apps, at least that’s what is seen here in tests.

How the other third-party apps (not Google!) behave in your device if have the 180 degrees enabled?

In my phone you have to choose between portrait or auto rotate.

Can you clarify what exact options have in the device?

If not exist exactly something about reverse portrait or degrees (like 180) then could not be offered by the device implementation.

I tried skype, whatsapp, ghostery, spotify and they rotate only 3 ways.
The preinstalled camera app has a small thumbnail in it (which shows the latest pic in the gallery, next to what the camera is seeing) --> this thumbnail is the only thing I could find that rotates 4 ways.

and for some reason it works in googlemaps too ?!

In my settings I go to display/advanced/devicee rotation and it has 2 options :
-rotate the contents of the screen

I think the Android that is installed on this motorola G6 plus is a full version. (sometimes a leaner version of Android is installed for example onto samsung phones which come embedded with a lot of annoying samsung apps- this is not the case)

Kurviger 1.4.1 was released with also some improvement in screen orientation handling.

Can you try it in your device?

If Android on a device does not offer all screen orientation choices (e.g. reverse portrait) then unfortunately there’s little we can do to workaround it…

I updated and now it works, amazing ! Well done !!! thanks a lot

You might try some angled plug
or some sort of screen rotation control app. Not tested, just an idea.

I updated and now it works, amazing ! Well done !!! thanks a lot

Thanks again for the report and the feedback!

Just tested V1.4.1:
Now Kurviger rotates always, even if screen rotation is switched off.
Samsung Galaxy S7 with Android 8.0
This might be an issue for people who have mounted their device horizontally (flat) and have disabled screen rotation intentionally.

Probably we need to enhance the options in Settings | Application | Screen orientation to cover all user needs.

Note that it’s always safer to lock screen orientation inside the app via above preference, to portrait or landscape.

@hanzani1 can you try in app Settings | Application | Screen orientation and set it to Portrait.

Then how you device behaves in reverse portrait? 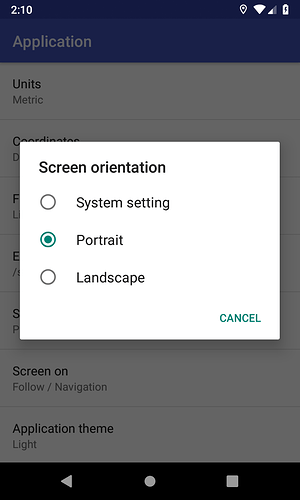 manfred is right. when I put my G6 on portrait then kurviger still rotates all directions. (google maps becomes fixed)

when I put my G6 on portrait then kurviger still rotates all directions.

Do you mean portrait and reverse portrait work that way?

Then I’ll revert latest screen orientation change in next version, so all users have back the intended workflow, since current app options are fine for all cases.

yes all 4 directions work when I put my phone on portrait.

Maybe there was a misunderstanding.
I have set:

So probably no issue, because who needs Kurviger in fixed orientation can do this in Kurviger settings.