When I zoom in to zoom level 18 or higher, sometimes roads disappear. Example B2R in Munich Kurviger : 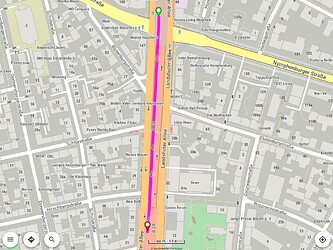 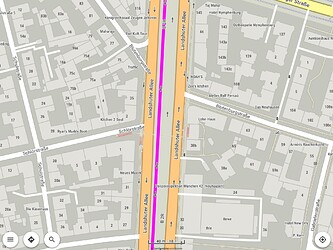 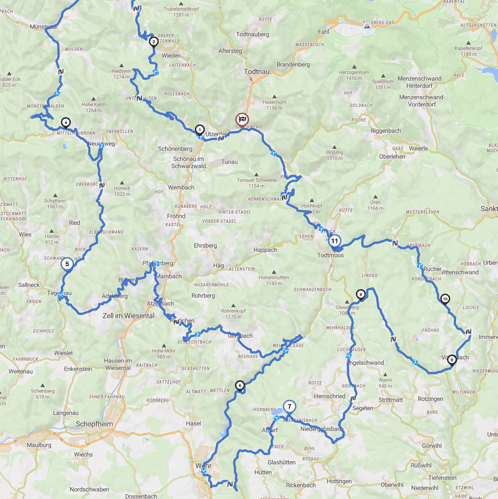 If useful I can provide further screenshots.

I opened only the germany.map (just downloaded → up to date). I use the internal map style.

There is no time available to work on offline map creation or map style.
As already mentioned, these should be public so that the community can improve them.

For me, application development is a priority…

Also check OpenAndroMaps with or without Elevate map style.

e.g. berlin.map is much better for testing

Thanks for the feedback, I will try other maps/styles (probably tonight).

I did some tests:

Conclusion: Seems to be a topic of maps on Kurviger download server.

Thanks for the tests.

Note that according to your image, the roads do not seem to disappear?
As their oneway arrow symbols still appear, so the road geometries exist.

And these roads seems to be bridges or tunnels?
Maybe it is related to your other topic:

Sometimes crossing roads with tunnels or bridges are shown in wrong order - the wrong road is on top. As far as I can see, the OSM data is correct. Example: Kurviger [Screenshot_20220213-102556] [osm] Further examples: If useful I can provide further screenshots. I opened only the germany.map (just downloaded → up to date). I use the internal map style. [info]

Hmmmmm - you are right twice: The oneway arrow symbols still appear . And as far as I can see, all disappearing roads are tagged with layer=-1.

But - as mentioned before and in the other thread - the disappearing could be fixed by using other maps, but style had no influence. For the Z-Level topic it was vice versa: The used map had no influence, but it could be fixed by using an other style (my first idea was to write both topics in one thread, but now it seems that two threads are better).

But nevertheless I think it is a bug in map generation: Why is the colored line for the street gone only, if I zoom in to zoom level 18 or higher ? And why does it work correctly with map from OpenAndroMaps?

Up to now I thought using the maps from Kurviger server would be the best, because it is the “native” map provider, probably most people use it, so maximum test depth …

There are many offline map providers.

I do not see the need to maintain separate offline maps,
if there is no one available to update and improve them…

Quick update: checking one of your examples with various offline map providers:

OpenAndroMaps may preprocess some tags (or layer) in map creation.
If anyone finds the fix we can include it in Kurviger and Mapsforge maps.