Quite a few navigation systems (standalone and apps) offer a function to simulate travelling on a selected route. Which means that the system doesn’t use the real GPS position but simulates moving along the current route.

With all the views, instructions and functions availabe just as you really would drive along that route. Usually with a “time zoom”-option the be able to play the simulation faster than you would in real life (with simulated speeds from 50 up to more than 300 km/h, sometimes quickly changeable directly in the navigation view during simulation) without being forced for “test rides” to identify your most preferred configuration settings.

I would be great to have such a function in the Kurviger app because this is a good way to try different things and to get used to the views and behaviours (like displayed or spoken instructions) of the apps. Especially but not only for beginners. More experienced users could use this function for getting deeper in the results of the different settings for the app (like zoom factors, layers, map appearances or colours).

Actually I authored first my “Navigation simulator” and then the navigation engine.
So now I can simulate navigation anywhere in the world without leaving the office.

Unless most users expect flight program developers to drive airplanes all the time.

Anyway automatic play or fake gps could quickly get complicated for end users.
More easy could be some Next / Previous buttons to traverse the route in navigation mode from turn to turn?

Anyway automatic play or fake gps could quickly get complicated for end users.

Why? It’s just like: Ok, here’s my route - now let’s look at it like a “film”. It’s a common function in different devices (e.g. from Garmin, but also in other navigation app like the “route preview” in Sygic).

More easy could be some Next / Previous buttons to traverse the route in navigation mode from turn to turn?

Yes, some systems offer this functionality too. But it’s not what I meant because this function is more about previewing certain instructions / sections of your route, it’s not really a simulation to demonstrate the whole behaviour of an app.

Yes. Would be better.

Can be done via mock locations following the route and triggering navigation events.

@SchlesiM what is the use of all those simulation buttons in your image?

what is the use of all those simulation buttons in your image?

There are 3 functions and one info:

The function to choose a simulation speed is very useful because it serves as a “fast forward” option to be able to quickly proceed to a special location within your rotue (or to quickly skip sections).

@SchlesiM thanks for the additional information!
(are their sim button details somewhere online?)

I don’t know any online sources with more detailed information about this feature (although there a lot of informations about Sygic here). I have Sygic installed and discovered this feature by myself (it’s somehow a little difficult to find in the app). But I also know such a feature from Garmin devices (GPS simulation mode).

Yes, if there was a button to proceed to the next turn instruction this would be a comfortable way to quickly skip through the simulation.

If fast forward / backward is available, is speed still needed?

I think yes. Because simulation should be dynamic (not just static previews of all turn locations), just as you were driving along the route. Therefore your travel speed has to be defined somehow (and maybe much faster than you would be an real life). 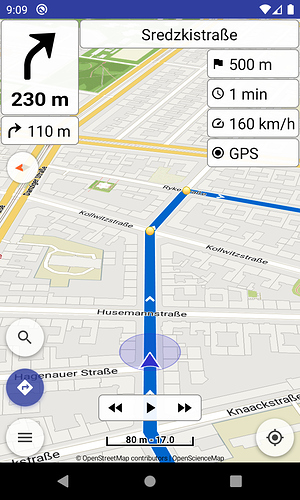 Coming in next version:

I absolutely disagree with that. All those buttons should exclusively offer functions which are important while being on the road.

Reason: sometimes it is quite fiddly to operate the UI elements while wearing gloves (or using a touchscreen pen mounted somewhere on your bike) because the touchscreen capable material on those gloves doesn’t work perfectly all the time (especially if the gloves are older and this material is a little bit worn out already). And you definitely don’t want to switch to navigation mode while being on tour just because you touched the navigation button too long (or your gloves are wet so the touch input is recognized too long).

Simulation mode is no “on road” function. In my opinion it would be better to have a “simulation mode” switch function in the “tools” menu (in fact I excpected it there after this function was introduced and was somehow astonished to find it in the “settings” menus).

Yes, that’s a good point because it’s an essential UI element while being in the simulation mode.

All those buttons should exclusively offer functions which are important while being on the road.

That’s why I didn’t implement it that way.

Tools menu hosts all around “quick” functions.
Navigation mode is like all other “modes” which are already hosted in settings.

Also it’s a long requirement to simplify the menus. They already host too much options which should move in settings and only then would make a transition to a new UI much easier.

Both will be available in next version.

Do you think would be nicer to “force” smooth movement in simulation regardless the “Settings | Location | Smooth movement” selection?

Since it runs more smoothly with that or leave it like now where simulation uses the settings selection?

The more it behaves like the real thing the better. So leave it as it is.