Taking the arrows in the menu routing --> waypoints to sort waypoints position by position is a kind of “is working, but there is smoother way…”.

Pressing on a waypoints and move it in any order would be more convenient.

It’s a solution that currently “just works” (like bookmarks management).
Reordering in dialogs that hide the map is not very intuitive anyway.

Probably one of those features that are like “yeah at some point we really need to do something really different there, but no time or priority now”. Every software project has those…

For the record, on (latest) Android settings, the active language is selected via drag among the available ones.

Maybe a misunderstanding, I don’t mean radio buttons (at least on my device re-sorting the language by drag doesn’t work).

I mean press on a waypoint, maybe confirmed by a short vibration, and then move it to another position in the list, then press ok like now for re-calculation of the route. I find it very intuitive and much quicker. By the way, in firefox I also can re-arrange bookmarks by drag & drop mapping.

Understandable and actually was already in our minds as enhancement.

Thing is that Android provided API to developers is often limited.
Common features elsewhere need here be created from scratch.

That was implemented in Kurviger 1.3!

Regarding drag & drop waypoints (or bookmarks), could be like in Android language preferences (e.g. below), still needs more refinement.

In the meantime you can expect revised and more convenient lists for waypoints and bookmarks. 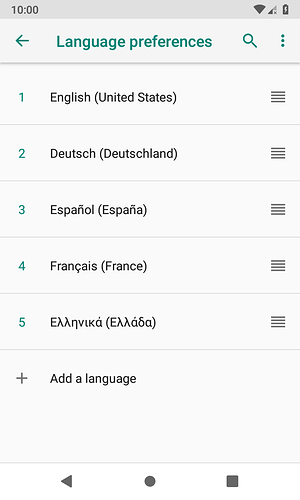