Is it possible to configure the data framed in red below?

Thank you in advance for your answers! 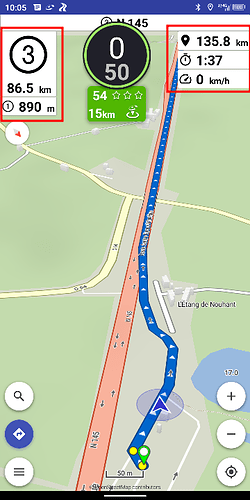 There are various parameters to change the look of the Kurviger App - for example mine: 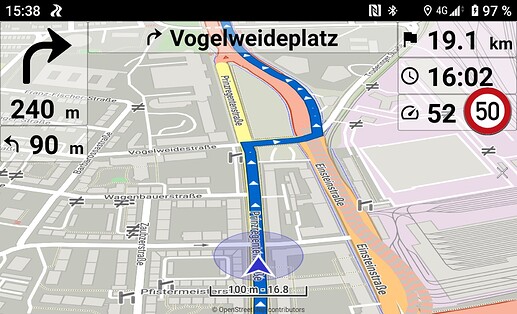 If you like it, here is the corresponding .pref-File (in .zip archived): my_Bike.zip (1.8 KB) - you can use it as starting point an modify it as you like. Just read the online manual: https://docs.kurviger.de/

There you find a lot of info to the UI (user interface) and more.

A new improved appearance for the navigation user interface exists in Kurviger 2.
You can change the background / icon / font colors & outline of the display panels.

I don’t want to create a new topic because the matter is trivial.
Well, it seems to me that the maneuver symbol on the left panel should probably be the color defined for text instead of the color of the icons. I think it would be consistent with the name of the street.

I don’t want to create a new topic because the matter is trivial.

You can set the same color for icons and fonts.

I would like different color for left vs right icons.
(but it would be too many options)

Thank a lot for your answers, after about 5000 km ride with Kurviger Pro I am completely satisfied

This application is, for me, better than a lot other application and my Garmin Zumo 340 LM.

I discover that " zaphod_42" display the speed limit and I would like to know if it’s possible with Kurviger pro ?

It’s possible to display the speed limit for planned routes in Kurviger 2 - but I bought an extra app for speed limit before Kurviger 2 came out. The

is an overlay of Tempo Master.

Having already Kurviger Pro I keep this one and my weak skills tell me not to modify Kurviger too much.
I also use the Coyotes application which informs me of speed limits and the presence of speed cameras or other danger zones

my weak skills tell me not to modify Kurviger too much

You asked for configuring the navigation panels. No fear, it’s easy to configure it even in Kurviger Pro 1.x. As described in the manual (link see in earlier post) you can modify the settings.

Here an example. You see appearance and the settings (Menu button > Settings > Application) for this: 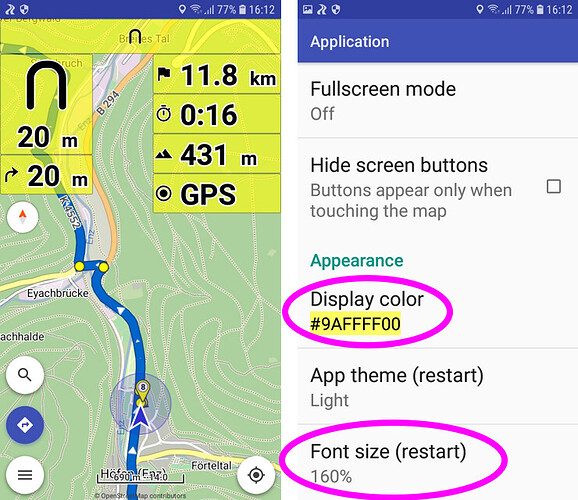 Similar to this example in the Application Settings you can modify Display color (including transparency) and Font size according to your preferences.
When modifying Font size a restart of the app is required.

You can set the same color for icons and fonts.

That’s what I have set up

But recently - more out of curiosity than need - I wanted to make the icons more “pale” than the text, and it had a negative effect on the maneuver pictogram. But since that shouldn’t be “pale” so I went back to the previous setting. And that’s it. It’s OK

You can Install “Kurviger 2” in addition to “Kurviger Pro 1.x”.
“Kurviger 2” which is simply called “Kuviger” is a separate app; to get Pro features you need to subscribe.
Both apps can exist on the same phone in parallel without any conflict.
You can even share the same offline maps.
You can export your current settings in: “setting | application | manage setting” and than import that file in Kurviger2