Route changes when imported to the phone app

Hi,
Quite often when I import the Route from the web on my android phone, even if I select the “unchanged” option it does change, even if the route settings in the app and the web are the same.
For example, on this one Home-Brener-Timmelsjoch-Jaufenpass | Kurviger On the web I planned to go through B182 avoiding entering Innsbruck, however when I import this to the phone app, the app routes trough L38 and Innsbruck.

I have purchased the app and I also have the yearly subscription, but because of those issues I found my self using Google Maps more and more often.

But if you use *.kurviger files to transfer your routes,
then Kurviger 1 Pro can show them without changes.

You can find more details about route transfer within Kurviger in the documentation. 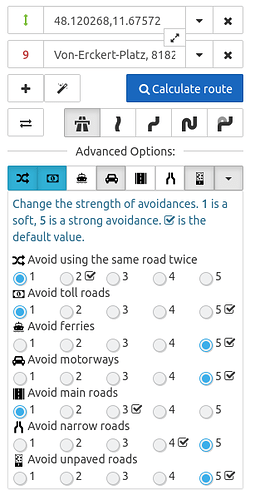 Looking at your example route, you have used features of the “Kurviger Tourer” subscription.
E.g. changed the strenght of avoidance.
This new features are only available in the new Kurviger App subscription.

Now you have 2 options:

Thanks for the quick replies.
Do I need two subscriptions? One for the App and one for the Website, or the one for the website covers also the new App?

Does Kurviger Tourer include the Android App?

We believe that this is a very fair way of pricing, because you only pay what you actually use.

Each platform has its own store.
They can not be combined for technical and privacy reasons.

I agree. It would be very fair if I have not bought the standalone app not so long ago. Just as an idea, you could have some kind of transition (One year or a couple of months free) for people who bought the standalone 1.x app.
It is all clear now, thanks for the quick responses and keep the good work.

Kurviger 1 Pro will be maintained for new Androids.

Just as an idea, you could have some kind of transition (One year or a couple of months free) for people who bought the standalone 1.x app.

Google Play does not provide such facilities (purchases are private).
Elsewhere they may maintain their own stores (we can not do that).

Also the price is very low compared to other apps:

Thanks for your help. I tried to export the route as *.kurviger file, and it seems to work well. I just need to read a bit more to see why android is adding .txt extension to the files or just rename them every time.
The rest is I think already is well covered in the “Switch to pay-as-you-go licensing” topic.
The cost of less than one tank of fuel per year is indeed a fair price to support the future development of the app and your quick and helpful support.

Hopefully in the future, the subscription app will be able to tap directly into the cloud storage.

I just need to read a bit more to see why android is adding .txt extension to the files or just rename them every time.

The import / export is handled via the Android’s file browser.
(where applications have minimal allowed control)

Please read more details about the export in the manual.

I just need to read a bit more to see why android is adding .txt extension to the files or just rename them every time.

Using the website in android browsers, depending on browser and other conditions (android version ?, device ?, … ?) the extension of the .kurviger file is changed, so that you have to rename it manually after download. In some cases just an ‘.txt’ is added (xxx.kurviger → xxx.kurviger.txt), in other cases the extension is replaced by ‘.txt’ (xxx.kurviger → xxx.txt). On my device (Tablet Asus Zenpad, Android 7): Google Chrome: correct extension ‘.kurviger’ FireFox: only extension ‘.txt’ Opera…

Thanks to you and devemux86.

Hi!
For the first time I have a really strange behaviour with Kurviger.

I use the WebApp with Tourer Addon and Kurviber 1 Pro.

I generated a really long trip (~2200km) and if I share it with my Mobile using the link,
it differs from the one in the WebApp.

Every Waypoint and Shaping Point is correct, but the route between is quite different.
Until now I could use the Kurviger Short Link and got 100% the same route.
Opening the link in the Webbrowser on my Computer shows the correct Route.

Please see the answer above:

Route changes when imported to the phone app App and Website

[Screenshot_20210614_110107] Looking at your example route, you have used features of the “Kurviger Tourer” subscription. E.g. changed the strenght of avoidance. This new features are only available in the new Kurviger App subscription. Now you have 2 options: If you stay with the (old Version 1.x) Kurviger Pro App use *.kurviger files to transfer the route. Buy the new Kurviger App subscription (Version 2.x). It can be installed additionaly to the old Kurviger pro app 1.x

Just tested in on my dad’s phone with Kurviger 2 incl. the pro features

I have made the exact same avoidance settings, but still get different results.

You mean you used the link above? via QR-code?
Which routing service is active in “settings | routing | routing-service”?
Did the phone have internet connection at the time of transfer?

As far as I know the only/best way to get the original route is always via the .kurviger-file, not via link or QR code.

I tried your short link.
The difference can’t be big.
Distance in the website is shown as 2260km 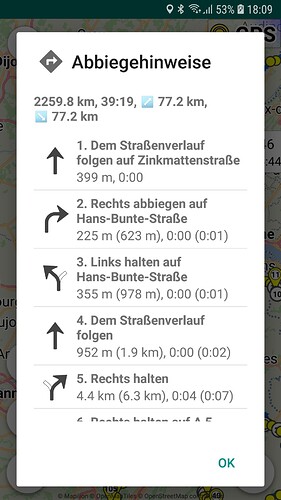 Why do you think there is any change? Where exactly is it?

Do you see any difference in route options after loading the route?

Strange…tried to reproduce the routing error, but now with the exact same avoidance settings I get 100% the same route in Kurviger 2.
For Kurviger 1 I have to use the Kurviger Export file, as you already mentioned.

Thanks for the help!