Not an update in the strict sense…
You can download an apk from various sources for those devices that do not come with Google Services installed (e.g. Huawei smartphones or LineageOS). However, I’m not sure what will happen when you try this apk on phones that already have the framework installed.
Funnily the Smartphone is running Android 10, which was released in 2019…

The Google Services Framework was updated 2009?

Note in the app:

I have the same problem. 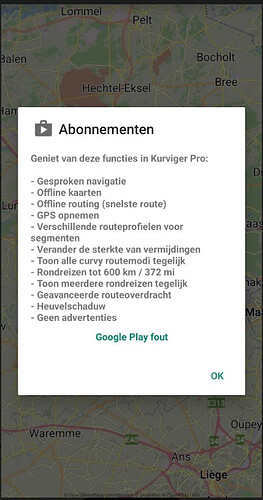 When the images do not even show the ads…
Maybe a blocker app is active or / and Google Play Store / Services do not work correctly.

This is what Google Play Services shows.

With other apps payment is possible via Google Play.

We cannot fix the Google Play on devices where it does not work properly.
(get subscriptions / states from Google server → provide them to the apps)

Hello. I have discovered if you open Google Play, search Kurviger Pro app and open from there the app navigation functions work. It appears the app icon on the device home page does not recognise the valid subscription.

I have discovered if you open Google Play, search Kurviger Pro app and open from there the app navigation functions work.

From time to time you need to open Google Play with internet,
to communicate with Google servers and cache subscriptions.

More details are explained above:

Thanks. I’ve never seen this subscription issue with other monthly subscribed app however.

There’s a lot of piracy going on with the Kurviger 1.
Another reason why it was abandoned…