I am currently planning a rather long trip from Denmark to Gibraltar('ish), and for some segments of the route I would like to include motorways, while for other segments I would do anything to avoid them.
This would be a great help for planning longer routes.

My suggestion is to include these advanced settings in the per-segment-options given in both the Android app, but also on the website. 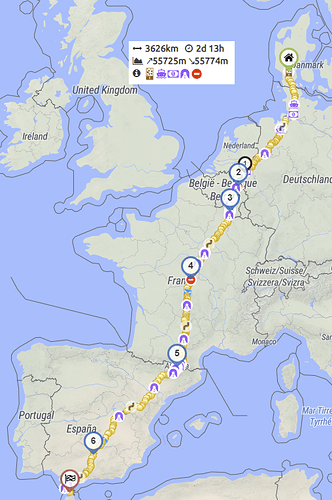 Even with the current visualisation quite a lot of people struggle to understand the avoidances and wonder why Kurviger is not using for example the motorway, yet they enabled motorway avoidance. So making this even more complicated feels wrong.

I am open to discussing this, but we would need a good solution for this and I am a bit pessimistic we can find something without overcomplicating the UI.

For now I would recommend to split your route into multiple parts and set the motorway avoidance for these routes individually.

Thanks a lot for the proposal. I fear that would lead to more problems of people being frustrated than helping people. The reason for this is because it’s hard/impossible to understand what happens without opening popups/tooltips, etc. to look at the settings.

This might not be an issue if you are just quickly plan a route and ride it. But if you plan your holiday ride over several weeks and 1000s of km, then it can become really complicated. Or if you share a route with someone else.

We do have a somewhat similar issue already with the avoidance factor and that you need to open the menu to see what values you did set for the factors (there is a different color on the button to show that it’s non default).

Being able to “print” or show a sort of route plan, divided onto segments (headers) with the options used per segment, would probably help those in doubt about the choices made by various options in the UI.

Yes I actually thought about something like this. This would also make the usage of profiles / leg easier. So this would be something like a grouping feature for waypoints. This could reduce UI complexity and therefore could justify that more complexity can be introduced (avoidances / group).

Perhaps a compromise would be better: The option could be set profile-individual, so for example you can disable motorways for curvy mode and enable for fastest mode. Then segments with profile “fastest” can use motorway, curvy segments can not …

Is it possible to get the global route options also on a per segment basis? Particularly, its the avoid toll roads/motorways option, which IMO would also make sense to have per segment. For instance, I would like to use toll roads on some of the segments while avoiding them on others. When a segment is first created, global route options could be inherited on to the new segment and later be overridden if needed. Is this possible?

See the answer above:

Thanks for the suggestion. The biggest issue I see with this feature is that this will make the UI a lot more complicated. I am not sure how this could be included in a way that does not make the current features/UI a lot more complicated and also on the other hand allow users to easily see which avoidances are used per leg/segment. Even with the current visualisation quite a lot of people struggle to understand the avoidances and wonder why Kurviger is not using for example the motorway, yet t…

I am not sure to fully understand. At least for the app there shouldn’t be a change in the UI, should there? All that happens is that new menu entries appear on the segment options menu. Or am I missing something here?

At least for the app there shouldn’t be a change in the UI, should there? All that happens is that new menu entries appear on the segment options menu.

This means changes to the user interface.

Also the algorithms, kurviger format, import / export, …, etc. would need many changes.
So it may seem simple from “outside”, but every core change requires work everywhere.

This requires careful planning and a step-by-step approach. We will see…

I’m relavilely new here on the forum, started the free version a few years ago and just upgraded to the Tourer version.
I searched into the forum, but did not find an answer to my question below.
Is there no possibility to set a standard/default strenght of avoidance option for each route profile?
Eg: Fast = fastest, motorways and main roads preferred
Eg: Most curvy = most curvy, narrow roads preferred.
I tried to make a route with 1st part motorways and the 2nd part narrow roads, but each time I changed a preference/avoidance, the ‘other’ part of the route changes as well. I must say I found this a bit annoying and hoped this would’ve worked better. Any tips or new option for this possible or planned?
I want to avoid to have to make different routes and merge them in another program (why would I need Tourer then?).

Thanks in advance and best regards

Thanks for the merging (I didn’t find this thread, sorry).
Is there meanwhile - almost a year after the last post - any news on this?
Thanks
woste

Is there meanwhile - almost a year after the last post - any news on this?

Not really, the basic problem is still true. The UI would significantly more complicated and this would require huge changes.

The question is, does this problem justifies that the UI gets more complicated? My opinion is, that it is not. Especially as this would influence the basic function of planning a route. If we would be talking about an advanced feature, this might be different.

It’s OK if only power users use some of the advanced features. The basic features should be usable as easy as possible without requiring special training

Or as a simpler alternative…

Are some avoidances really needed in non-curvy routes?

e.g. should “Avoid motorways” be active in the “Fastest” route?
(even if enabled for other route profiles)

Thanks for your reaction, but I’m afraid I don’t quite follow you there: the possibility to change the avoidances on the different route profiles is just what I need …
So eg avoid motorways inactive on fastest route and avoid motorways active on (extra) curvy. Or am I missing something here?

For me the way to choose the type of route (the fastest, fastest and curved, all curves, …) is enough and also with the custom exceptions it works quite well.
Anyway after building the route it is better to check it to see if it is correct where it wants to take us and it is easy to fix and choose exactly where you want to go … or let the gps take you to it wherever you want and you just enjoy driving.

Thanks for your reaction, but I’m afraid I don’t quite follow you there: the possibility to change the avoidances on the different route profiles is just what I need …
So eg avoid motorways inactive on fastest route and avoid motorways active on (extra) curvy. Or am I missing something here?

Do you mean to try to automate everything so much?

On the web you can create as many waypoints as you want to outline the path you want.
I think it is perfect as it works and I don’t think the other web/apps have as much chance of configuting as Kurviger.

the possibility to change the avoidances on the different route profiles

I think there is a missunderstanding how Kurviger is working.
Kurviger does not have a thing like profiles
The curviness is just another option and has no connection to the avoidance settings.

e.g. “extra curvy” avoids motorways anyway, so no need to avoid them additionally.

Kurviger does not have a thing like profiles
The curviness is just another option and has no connection to the avoidance settings.

This is correct. In theory this could be changed.

Yes, that could be one way to implement this. This will make using the route planning feature a lot more complicated though. And it will be harder for users to understand what is happening, I have commented on this a few times further up in this topic as well.

Thanks for the reactions.

FYI: after playing a bit with the avoidances, an acceptable solution for me is to set the Avoid motorways and the avoid main roads on 3-4. This way my segments are more or less what I want. Not 100% but close.