I cannot speak about you, only for myself. I am also developing software and I know that we still “live” because we have the maintenance agreements for the most software copies that we sell. That is, if you want the app to prosper, then you must participate in a way. If you don’t then you can buy the as-is version once and stick with it for as long as you want but you should not expect updates.
That is, you cannot expect people to invest their money and time for years to come developing the app by paying them a small amount upfront. This just does not work. At the end eveybody looses. You loose the fine app, developers loose income.

Then I ask you how that works with those apps I have where I paid a few bucks YEARS ago and they’re still pushing out updates and improving the apps.

OTOH, I’d be totally fine with paying an upgrade fee (which should be slightly lower than full-price) for a new major(!) version every year or two (which would come down to something like 40-80‌ Cents a month). (Just don’t do any stunts like Chris Lacy did with his ActionLauncher.)

I cannot tell how that works for other apps, what kind of updates and lift-ups they make and what is their overall support quality. But according to the common sense, this has to stop sometime. When this will happen I do not know, but this WILL happen when the guy(s) find out they are simply working for nothing. It is this scenario I am afraid of. From my perspective, this app is too cheap and I do not know how long I can benefit from it.

But as I see we do already have a consensus about needing to support the developers
with some “hard facts” and not only “oh thank you for doing such nice work”.
Because they cannot pay their expenses with “flowers” they receive from us. They need something much more profane (i.e. money). Your suggestion about paying the updates to major versions is reasonable from the “outside” but you do not know what kind of additional organisational burden this poses. I do not know either. Mine was also just an proposal. So I would expect from the developers to set up a resonable model that suits them best. I do not really care how am I going to pay. Personally, to an extent, I do not care how much I’d need to pay either (not everybody can do that, I agree). But I think there has to be a continuous source of income for the guys so they stay motivated and you and me can benefit from their excellent work. And I mean really excellent work because I know how the competition (which is even more expensive) is handing the work (both development AND support).

My point is: If Kurviger switches to a subscription model, I’m out. And from what I’ve read in various forums, that’s also a huge no-go for others.

Usually, they should be able to keep a somewhat steady income by selling more and more Pro versions for quite a while as I don’t think the market is saturated already. That’s how it seems to work for e.g. Nova Launcher or Pocket Casts (two of those apps I’ve paid for years ago and still got all updates for free since then).

If they get too greedy, people will find other - cheaper - solutions. Even if they’re worse.

Another idea: Donation buttons. This would be even better than selling upgrades as nobody is forced to pay and I could send some money their way when I feel like it. E.g. after a great trip with their app.

You are of course free to do whatever you feel right, as you are the customer

My point is: if they don’t switch to a subscription model (or anything else
that would keep their income comming), I’m out.
Because I invested in a complete Android infrastructure (was on Iphone before)
just because of this app. Not to mention the time and effort I invested myself
to master the new environment and the app and all its edge cases.
I do not want (and cannot) afford to do this every now and then.
And I can assure you there are many of people having same or similar standpoint.

Personally I don’t like subscriptions very much.
I prefer to pay once, use it as long as I wish, and decide myself when I want a new (upgraded) version.

That said, I can’t imagine how 10 EUR once in a live time could be a sustainable business model.
Kurviger is not Whatsapp/Facebook. (there you are the product being sold, not the customer

)
If we want Kurviger to survive we’d have to pay more.

To attract new users, and don’t annoy existing users the current price model IMHO should be kept for the current feature list. But new features could cost extra.
An alternative to subscription may be plugins for new features. (OsmAnd is doing this AFAIK)

Possible candidates for extra payment would be:

Presenting all variables, besides app (not free) development, several features cost on regular basis, like maps (offline / online), hillshading and other.

I really love this discussion thread, what an awesome back and forth of opinions, I think this gives the devs already valuable input for what they could implement in the future. I also want to say a couple of things and present my taste:

But, talking about subscription model, if you use the app
“once in a while” the said model is even more appropriate
than pay-once as the latter must by definition be more expensive.

No I don’t agree, not “by definition”. On most subscription models or prices that I can imagine, after two or three uses, the subscription is probably already more expensive than the current 10€ single payment

My point is: If Kurviger switches to a subscription model, I’m out. And from what I’ve read in various forums, that’s also a huge no-go for others.

You’re making tons of good points in the first couple of responses, but this one is a bit strict I think. It depends hugely on the fine-tuning of the subscription models, and what features would be locked behind the paywall. If the models are combined like Robin and linux-user suggest I think I would be able to find my personal niche of features.

Lastly, let me just say what is incredibly important to me and I think has not been said before:
If you move to a subscription model, then I think it’s a must to grant the useres that already paid the 10€ all the features, at least the ones they had before. Lifetime must mean lifetime, I cannot stand companies who lock features after the fact.

@linux-user expressed reasonably well above what most think for any app’s viability.

I dont like to pay every month or year such as with many othet software nowadays.
(MyRouteApp does this and I avoid it because of that) athough it has many good features.
Yes, I would like to pay more if everything is fully working on the android pro app.
Max would be 50 Euro, but once only.
Then a new (smaller) payment for major updates with new features, just like as it used to be for most softwares.

I’ve just read this thread. I know it’s a bit tricky. Nobody wants to pay to much and the developer needs an income. Devil’s circle… Is this the correct translation? I’m also one of the people who don’t like the monthly payment version. And I believe it will keep people away from buying Kurviger Pro. I think the developer’s should do a test with a donation button.

I enjoy the all the things which are coming with Kurviger and this forum. The straight contact to the developer is unique. And I personally would be fine to give every year some money. And I think the developer’s will see that the people appreciate the work they do.

I think the developer’s should do a test with a donation button.

Google Play does not allow external payments.
Several apps have been removed from Google Play because of violation of payments policy.

I didn’t know it. Google is for someway really strange and takes a lot of Money for work they don’t do themselves. 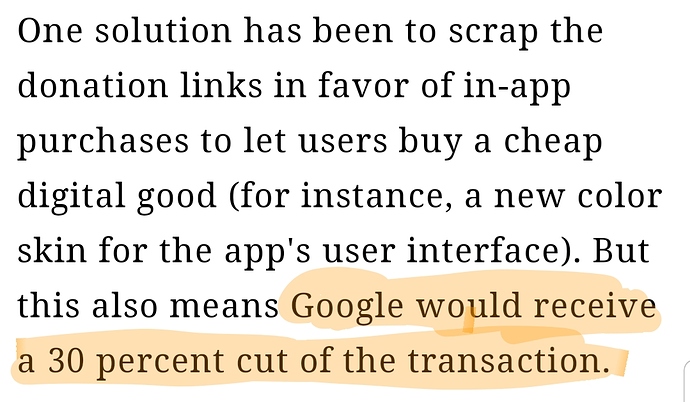 all the developers of Kurviger

Actually there are 2 developers:

I am not quite ready to examine potential changes in Kurviger’s business model.
With many features under my implementation, we must be careful & transparent.

One thing is for sure and like mentioned above in a similar app’s coming change of business model:
Without subscriptions there cannot be any sustainable future for any application.

Note: it’s funny that the only mode where Google offers free trials is inside subscriptions.

Actually there are 2 developers:

I know this and you are earning my respect.

We will see what the future holds.

And I personally would be fine to give every year some money. And I think the developer’s will see that the people appreciate the work they do.

It’s quite easy to do it: 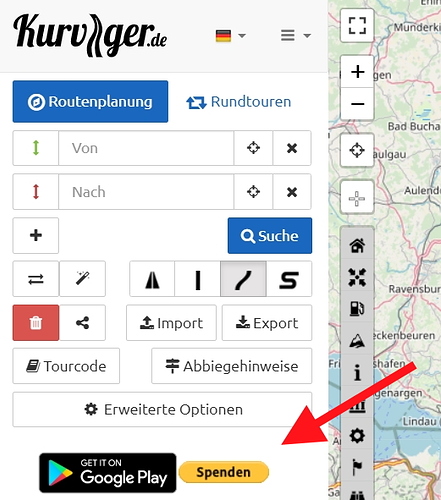 and I do it - comparable to a tip for exceptional service.

YES. This is what Í´m gonna do. Every year. And I hope others will as well. We must make sure this app/service survives long time!

It’s quite easy to do it: