Add "Setze Wegpunkte auf Straße" as Icon on the map

during the last weeks I planned a lot with my smart phone (iPhone 8 Plus) and the website https://kurviger.de.

I recognised one thing that would make it even simpler to work with the website and a smartphone:

What does the community think about that feature?

It is only possible to work with the full size screen due to the limited resoluton of the smart phone: 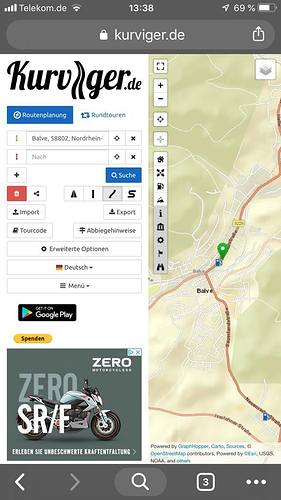 Makes sense!
Maybe an icon on the phone screen that gets big when you tap and hold it - e.g. a triangle - and whose tip becomes the waypoint when you lift your finger.

Have you tried to hold the smartphone horizontally? That way it becomes quite usable IMHO. BTW: it would be enough to press the button only once before exporting the route to a navi, so I am not sure if would be wasting unnecessary space on the map?

Hello, yes I tried to work with a horizontal screen but the screen is even smaller when I need the keyboard sometimes: 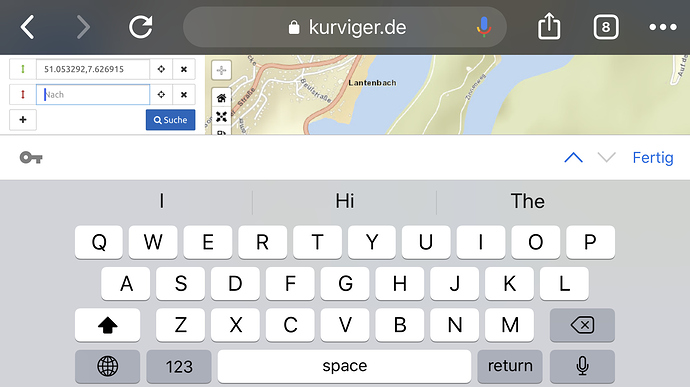 C56A8169-28A8-4E2D-967A-31AAE9DA1DAC.jpg2001×1125 250 KB
. But I will try again.
And you are right, in best case it is only necessary to push the button “Setze Wegpunkte auf Straße” once. But usually I checked after each point whether it’s moved correctly and the planning of my last route was still in my mind where I had to place way points in “agriculture only” streets. In that case the Button moved the waypoints far away.
At the moment I do not use all other icons (except full screen) and I am not hindered by the other icons. One more would not be a problem for me

Why don’t you use the Kurviger app to plan routes on a smartphone. It has the same functions and features and (in my opinion) is much more appropriate to be used on a mobile. Escpecially the crosshair waypoint placement is very comfortable.

Why don’t you use the Kurviger app

I wait for the iOS Version of the kurviger App, that comes hopefully soon

I would buy it immediately. Up to that I select the second best solution with my iPhone and the Navigon App.

Ah, ups - wasn’t aware of the fact that there’s no iPhone version of the Kurviger app

. Another reason not to use iPhones

I wait for the iOS Version of the kurviger App

There is an intermediate solution:

But I also get the text: 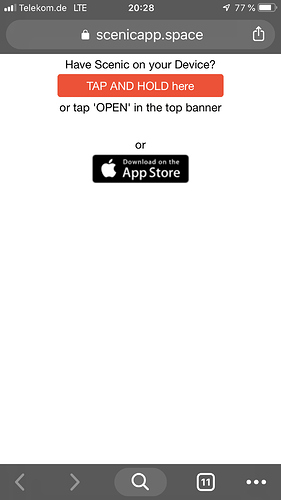 Upps. Now, it’s the first time that it works. I have to save the url (I.e. in this forum). When I click the url scenic starts and imports the route