The Shape and Via Points function difference may be a bit bigger.

Via Points. (A promoted Shape Point).

During navigation, Shape Points remain discreetly silent but skippable reference points.
If you rejoin a route and move in the forward route direction for a while you can “skip” it.

Could possibly be a bit more comfortable by NOT applying backward rerouting directions to Shape
Points.As soon as there is a “connection” with an existing route point, continue the original route straight ahead.

Please read the relevant feature topic about why community selected the shaping points to not be “erased” automatically, so that the route is kept close to the original.

I do confirm the method by Kurviger to keep the Shaping Points is absolutely optimal genial !

I do confirm the method by Kurviger to keep the Shaping Points is absolutely optimal genial !

The method of Kurviger is realy genial! Better than all from others (using shaping points) what I saw until now. A BIG THANK YOU to the developers!

I prefer the Kurviger behaviour here above the Locus method where the Shape points are lost.

That is one thing of the Kurviger method. Reached after some discussion in the forum.

The subject is only about a slightly better and faster comfortable handling of these Shape Points during navigation rerouting actions when rejoining the original route after the Shape Point.

And changes in this point perhaps bring disadvantages for the WHOLE Kurviger method! Therefore proposals are to be analyzed first with a view to the whole method. Our developers (emux for the app, robin for the website) do here excelent work!

Each routing software (garmin, tomtom, locus, kurviger, …) has its own philosophy for the algorithms. Therefore each system has its own route. When looking on different systems with the same waypoints there are different routes. And the routes of Kurviger are very fine results for motorcyclists, usable in navigation with more or less strictness or flexibility in following the route! Selectable automatic or manual rerouting. A lot of experienced users prefer the manual rerouting.

To your video: Why you don’t give a link to the route (short link or URL)?

Spending a lot of time I reproduced your example.

The initial route seems to be https://kurv.gr/Lcdy4. 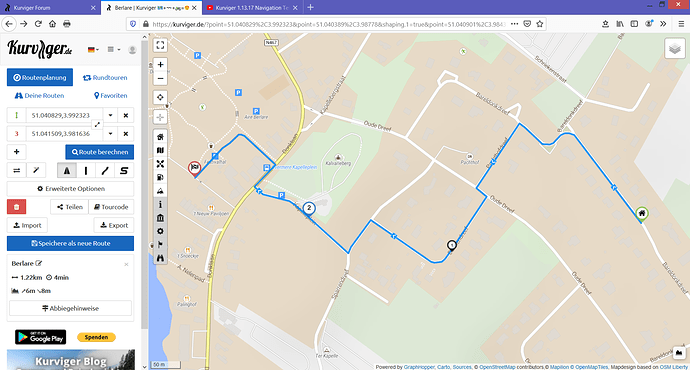 Without the shaping point in the Dennendreef it is https://kurv.gr/LbfAG. 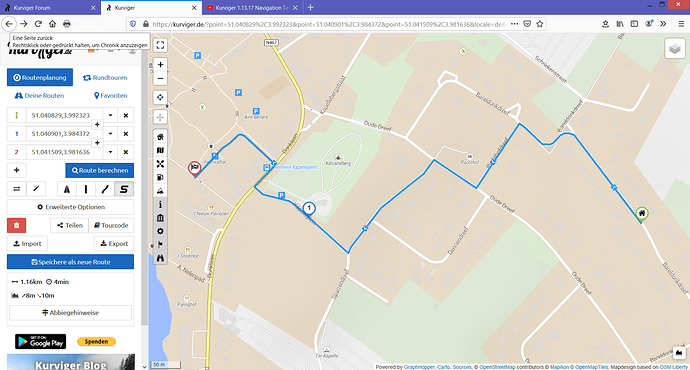 In your video you leave the initial route (in Bareldonkdreev you go straight on instead of turn left). Then rerouting is done: 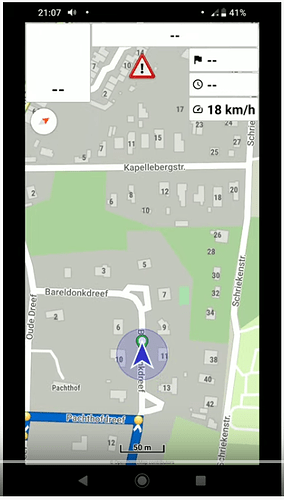 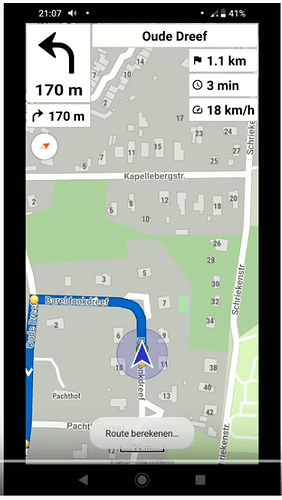 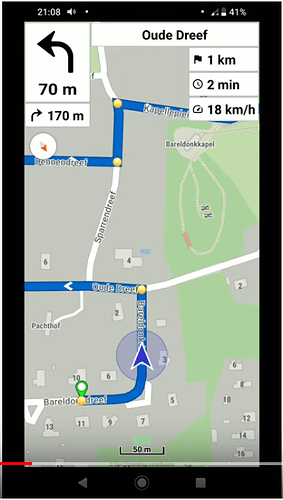 Rerouting is done that you can drive forward, You don’t have to make a U-turn.

To rebuild the remaining route i had to move the position behind the curve seeing in the picture above. The route is https://kurv.gr/Ebkbp. 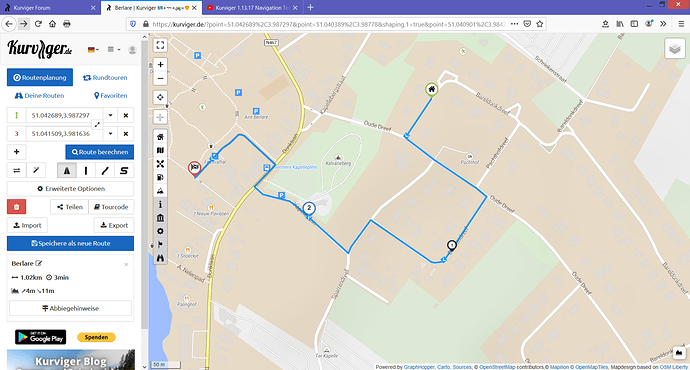 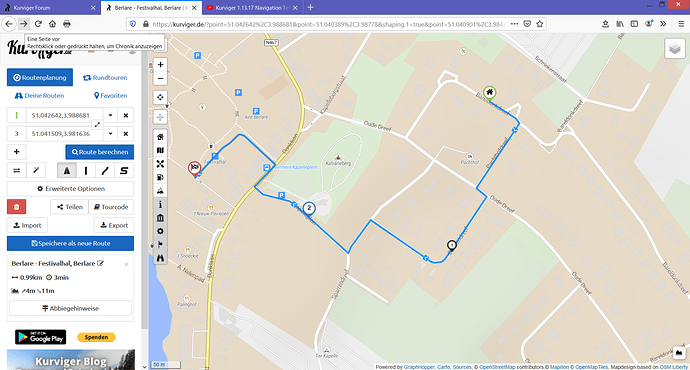 for0709_061920×1032 496 KB
Here a U-turn would be necessary! But the Kurviger method of rerouting let you drive without U-turn! Well done, Kurviger! That we have a rerouting as done, avoyding A U-turn!

You leave the route of the rerouting at the Oude Dreev. Instead of going straigt on you turn right in the Sparrendreev. Rerouting is done. 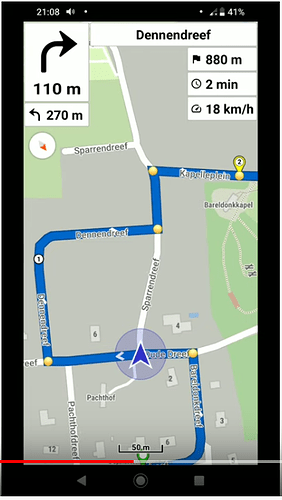 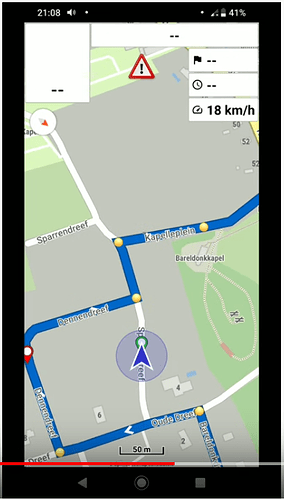 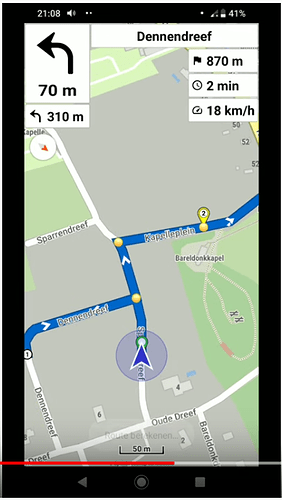 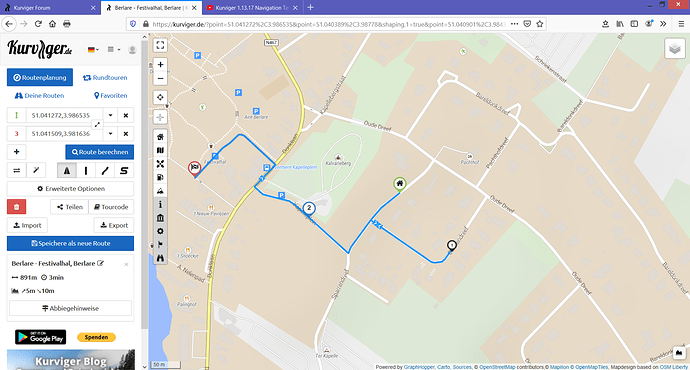 As we can see, the shaping point is not ignored!

In this case the solution in Kurviger is to skip the next waypoint. It seems that you used this action. 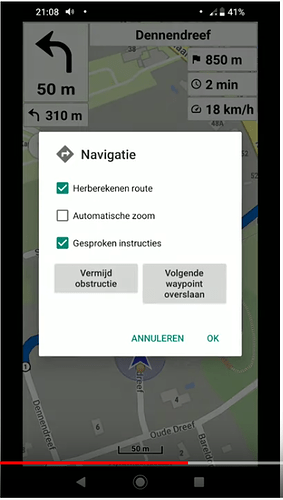 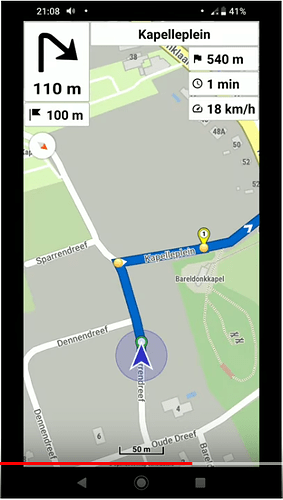 I prefer the current behaviour and possibilities of Kurviger in this case. And therefore I don’t want an automatism for ignoring the shaping point (in your example)!

Kurviger Navigation on the road works much better than it seems in your “extreme tests”.

Perhaps you should try to get familiar with the app and the needs in the forum.

You not only forgot to give a link to your initial route. Additionally you forgot to mention that in your test you used the Strict mode for rerouting.

Before publishing the video and depending on the video results make proposals perhaps it would be better to try the other (flexible) rerouting modes. Then the result looks much more better.

Walter as I see you like these tests and the experiments.

No! I don’t like it! But in my opinion until now you don’t understand the flexibility of the Kurviger navigation and rerouting. This I thought at your earlier posts but I didn’t answer to it. But due to your post with the video I was forced to a reaction. I don’t need more videos with your extreme tests. Please try to get familiar with the app. That’s only my opinion.

I normally do not such a ‘dirty’ tricks

Please avoid the dirty tricks. Makes life much easier and gives more respect in the forum!

Everyone please try to follow the forum guidelines for civilized discussions.