A very useful and important feature - and I am grateful to the developers, that they realized that now -
it could save lifes!! 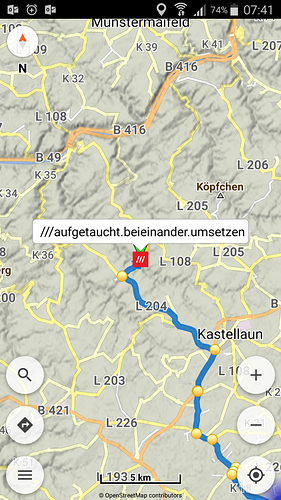 Since a lot of people do not know (yet) what this is, I would like to give a short introduction:

What is it - and what is it good for?

There are many situations in which it is necessary or convenient to tell others your geocode (geografical position) as accurate as possible - for example you are cruising in a group and lost touch, or, much more important, you are cruising by yourself and had an accident far out and need help.

Of course you can give someone your GPS coordinates by call or by text (SMS), by messenger (e.g. WhatsApp) or by email - but remember, how complicated numeric GPS coordinates are, and in a situation of stress it’s quite impossible to do that without the risque of mistakes or misunderstandings.

For that the “what3words” “standard” provides a much easier way to encode a map position - by a simple combination of an unique three (natural) word address which encodes a geografical rectangle of only 3 x 3 meters - accurate enough and worldwide!

Can we have an example?

To illustrate I just chose an arbitrary position on a very curvy and small road in Hunsrück mountains (part of the region of my home routes), just to have an example (you may follow it: it’s at the tip of a sharp u-bend - and let’s hope that nobody will have an accident there ever - but IF):

The GPS coordinates are (according to Kurviger)

Imagine you want to tell that position in an emergency case, perhaps injured, by using a keyboard or even by saying in a call …

But with version 1.2, Kurviger gives additionally the what3words Code for this position - it is:

(as what3words code to write you just have to include the 2 dots between: express.sill.masses)

or, in German, should work as well

(what3words geocodes are usually leaded by a triple slash (///), but in the most cases, as in Kurviger, it is not necessary to add this slashes if you enter the word.word.word code into the search field.)

These only three natural words (words in a natural language) are much easier to remember and to send for example by WhatsApp or to say during a call than the GPS coordinates.

Everyone who has a compatible app or device can now find your position easily and quickly.

And at least everyone who uses the what3words app on smartphone or opens the what3words map in a browser (have a look: https://map.what3words.com/express.sill.masses) will find your accurate position instantly:

How do I get a what3words position code on the road?

b) If Kurviger does not run, use what3words app:

How can a receiver of a what3words geocode handle the code?

The receiver of your what3words position message may now:

b) in what3words app:

c) If the what3words code was sent by WhatsApp (see below), the receiver gets a WhatsApp message with a OpenStreetMap link, which after a tap opens Kurviger with the position.

Have a test with “aufgetaucht.beieinander.umsetzen”!

(For that it’s also a good advise to push as much people as possible to install the free what3words app!)

What is then the advantage compared to sharing my position by e.g. WhatsApp or GMaps directly?

-
as long as the receiver has WhatsApp or GMaps installed and running;
but if not: then what3words has the advantage that is works across platforms …,

and as long as you have a data connection;
but if not and you have at least a mobile phone connection, then you could forward the code by talking even to a home phone (Festnetz),

or, let’s imagine, in these previous cases you only have a technical problem but no internet or mobile connection is available, and someone stops to support you, you could just tell him the 3 words and he then could continue his way and foward the 3 words as soon as possible to someone else who may come or send technical support to your position.

As the what3words geocoding “standard” is on the way to be used by more and more people, applications and rescue devices, Kurviger did a good and important step forward …

Thanks you for your explanation!

In fact I didn’t know yet what this W3W format was intended for. Makes sense now.

Thanks @Uli_LH for the useful introduction!

Next Kurviger will have an intelligent search with auto suggest and corrections for typing / spelling errors, like in their website.

Thx Uli.
I tried out the function “share position”. My hope was, in case of emergency I can use this function in order to send my coordinates to someone who will help.
So I tried this out with WhatsApp. There is a link created like https://www.openstreetmap.org/#map=9/49.67683167/8.62859442
After clicking this link (or copying it to Mozilla) the page of openstreetmap.org is opening but NOT showing my position.
What am I doing wrong?

Next test was to share the W3W “coordinates”. To share it via WhatsApp creates only the W3W words but no link which can be clicked on by everybody. Wouldn´t it be usefull to create the full link and send it via WhatsApp or you name it?
In my case the link would be: https://map.what3words.com/breitet.schritt.anteil

Without the complete link nobody will find you because they do not know what to do to find your position.

I can enhance Share | Location to include also a what3words (online) link.

And probably use a complete what3words link instead of just the 3 words text.

7 posts were merged into an existing topic: Is it meaningful to add features like “WhatsWords” to Kurviger?

Moderator mode:
Changed “What3Words” to “what3words” due to the brand rules of what3words -
thx to @devemux86 for this important hint!

Also in next Kurviger the Share via OpenStreetMap will be enhanced with a position marker.

So I tried this out with WhatsApp. There is a link created like https://www.openstreetmap.org/#map=9/49.67683167/8.62859442
After clicking this link (or copying it to Mozilla) the page of openstreetmap.org is opening but NOT showing my position.

If me I click onto the openstreetmap link in a WhatsApp message, Kurviger app is started (resp re-opened) and the position is shown instantly.

But this depends on the configuration of your system, which you have to push to open such links with Kurviger resp. to let you choose an application to open with.

Next test was to share the W3W “coordinates”. To share it via WhatsApp creates only the W3W words but no link which can be clicked on by everybody. Wouldn´t it be usefull to create the full link and send it via WhatsApp or you name it?

THIS is already replied by @devemux86.

Another aspect and proposal:

Could what3words geocode also added to the Tools - Go to answer?

Could what3words geocode also added to the Tools - Go to answer?

How do you mean that?

If I open Tools - Go to, I get (only) Latitude and Longitude (and the Zoom level).

Would it not make sense to get the what3words code then too?

Go to tool is more for input, i.e. enter coordinates / zoom and change map position quickly.
Not actually as a reporter of map position, though for debug purposes is useful like that too!

Would need to think more the workflow regarding that.

So expect the below fuzzy search to be removed from app and only complete 3-words text to work with one successful result. Just like offline Plus Codes. 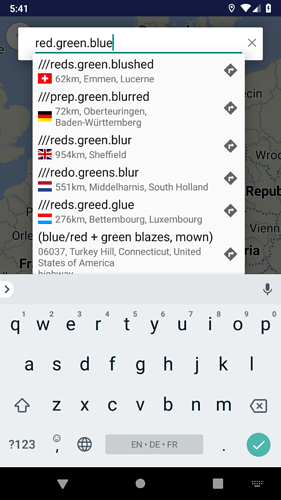