Today unfortunately the bug that I had already and described in the past, went back.

I have settings --> navigation --> rerouting mode set to “next unvisited waypoint”. My action cam was connected to WIFI direct in order to access it with the Cam App. Internet connection was working. I have passed already 2 of my waypoints, but couldn’t drive to the 3rd 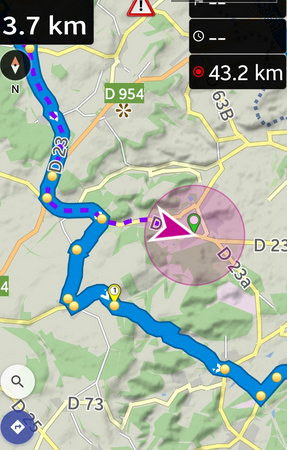 So I used the menu “skip next waypoint” 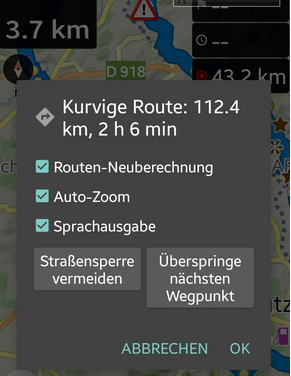 In my expectation the kurviger app would know that I have already passed wp1 and wp2 and this should skip the wp3 and route me to the wp4. But this doesn’t work at all. It deletes the wp1, 2 and 3 and starts calculation, but then suddently the wp3 is back as new wp1, get’s NOT deleted and kurviger calculates to whatever and whereever, but not the wp4. I have pressed the “skip next waypoint” button a dozen times and more, but it also happens that all my waypoints are back and the calculation is to “I don’t know which waypoint”, but not the one that I want, wp4. 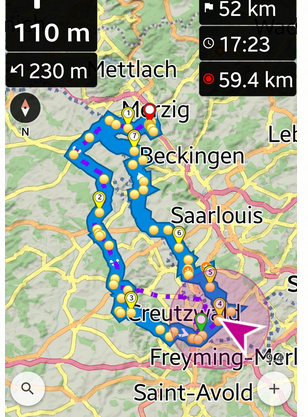 Even when I am almost back at my starting position, all the waypoints are still there. 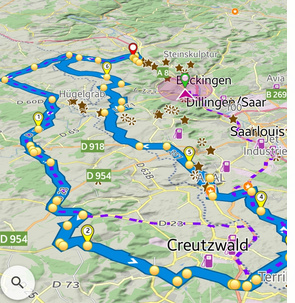 The button “skip next waypoint” doesn’t skip or delte any wp. 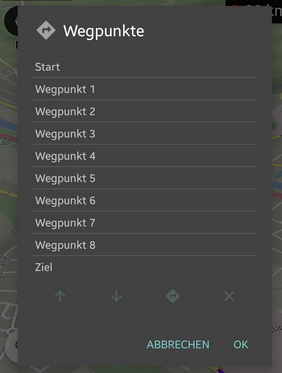 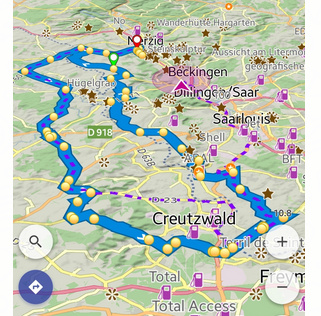 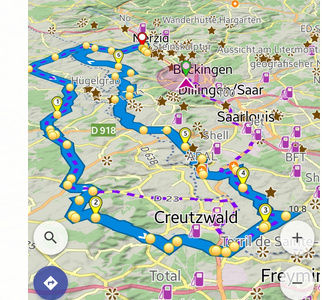 Even all the wp’s come back… it is an absolute desaster… I really fear the I have to drive all my routes 2020 with another navigation app. I wanted to use Kurviger, but with this result I can’t. This is a pity.

The button “skip next waypoint” doesn’t skip or delte any wp.

This sounds weird, can you still reproduce this? This works fine for me, I just tested this on my desk, I couldn’t see any issues there, the waypoint was removed as expected.

I have settings --> navigation --> rerouting mode set to “next unvisited waypoint”.

Since it seems that you tracked your tour, would you mind to share the track, the originally planned route and coordinates where this happened. Otherwise it’s really hard to reproduce any issues.

This image looks a bit weird, the net waypoint is correctly set to WP 1, but the route is not recalculated. Then in this image:

To me this really sounds like you hadn’t had internet access. If no recalculation worked, even after manually deleting the waypoints, then most probably that’s what happened.

This sounds weird, can you still reproduce this?

I have sent you the track by email. I don’t want to provide it here due to data privacy.

What I also have seen is that the speed data in the tags are wrong. They show between 0 and 30 (what, miles or kilometer?). But it can’t be true in any case. My speed was mostly between 80 and 130 km/h.

It could be that something hung up. It’s a bit hard to know if we can’t reproduce it.

No, since I am not on the bike any more and the weather is actually not that good in Germany.

Sometimes it can actually help to try these things at home. Both skipping of waypoints and deleting waypoints from the waypoint list can be easily tested at home, there you can also control your phones internet with:

They show between 0 and 30 (what, miles or kilometer?)

If I remember correctly, the speeds are in m/s. If you multiply them by 3.6 you have km/h.

It deletes the wp1, 2 and 3 and starts calculation, but then suddently the wp3 is back

This is not a good idea.
If it doesn’t work the first time it won’t work better, if you hit it over and over again.

If it is not working, better stop the app, and start it again.

Edit.
And - as with any software - it is always a good idea, to have a copy of the original file stored on your device. In case something goes terrible wrong you can than import it again.

And - as with any software - it is always a good idea, to have a copy of the original file stored on your device. In case something goes terrible wrong you can than import it again.

I also did this 5 km before my final destination, but still off the planned route since I took a different way as planned. NO recalculation was made, skipping waypoints didn’t work.

Sometimes it can actually help to try these things at home.

Ok it works then, but this helps me less, when it is not working on the road.
And again: when I try this at home with manually disconnected internet, I get the message “no internet connection”. But I didn’t have this message yesterday on the road.

I know the offline routing was already discussed and is planned (hopefully). If there was a simple offline recalculation FALLBACK for shortest route when there are such problems, is this an option? Maybe not possible because too complicated?
Theretically: Kurviger “knows” when the route cannot be calculated for whatever reason. It knows which waypoints has been passed already (doesn’t it?) Is it possible then to automatically use the shortest calculation to the next unvisited waypoint by offline calculation? And if the user skips next waypoint (in this case would be wp 3, since 1,2 already have been passed), then automatically route to wp4 in shortest routing mode?