First of all congrats for an awesome app. Keep up the great work

My suggestion is about the ability to have a navigation mode in which no map is shown, just the next maneuver, its distance, the following one along with with its distance, and eventually one or two personalized field (like speed, time for destination, a highlight when over maximum speed when thebmaos support it, something like that).

Sometimes we just want to go for a ride without caring for where we are going. This was actually how I found Kurviger and one of the reasons I think it is unique and awesome. But sometimes the mindset is just to enjoy the ride and the scenery, and you just want to know ‘what do I have to do next?’

This would be top notch, and something to differentiate Kurviger from its competition even more.

I didn’t found this feature, so if it is already built-in please excuse my blindness, and explain to me how I can use it.

What exactly is the use for such user interface?
Why hide the map and not use the navigation as it is now?

If you mean to fill the whole screen with the navigation panels (without map),
it was suggested in the past, but it requires a new navigation user interface.

Just a minimalistic navigation mode. Not all of us want to see everything ahead all of the time. Sometimes Kurviger is just the perfect escape to pick up your bike and go for a round trip ride in which you just want navigation to show you ‘now turn right in 100 meters, then left in 5 meters’.

If map is dispensible in this context indication panels would provide a bigger visual feedback and require less attention time to the phone screen, improving driving security.

I’m not suggesting killing the map, but having an alternate visualization one can select if wanted, which I know some riders prefer in a given context.

I tried to find a similar suggestion in the forum, but perhaps I didn’t do a good job

Did you try the “fontsize” in settings/application? If you set it to 200 (the maximum right now) it looks already as you like (at least in the upper third of a portrait screen): 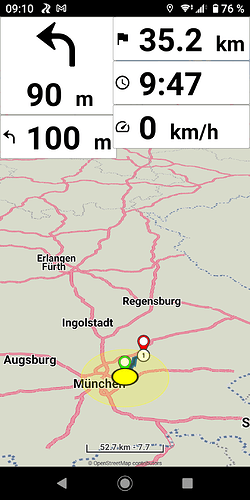 If the maximum fontsize would be increased (500 ?) it could be perfect for you in landscape:

Maybe it would be possible in combination with the already implemented energy/OLED saving mode? I already thought about the fact that instead of completely blanking the screen, the most basic panels could be displayed?

If the maximum fontsize would be increased (500 ?)

But in that case, perhaps a waste of the device’s resources to display an invisible map in the background.

That is a nice workaround

However I agree that it’s also a waste of resources to have the map being pulled in the background without being used.