I’ve made some testroutes with Kurviger Tourer for my Garmin Zumo XT (NTU Garmin cards) and must say the result isn’t quite what I hoped it would be. First of all: the (extra) curvy routes/tracks made by Kurviger are excellent and what I was looking for. Now the problems start while transferring them to the XT. I always export the tracks, show the track on the XT and convert to a route. In more than the half of the testroutes I made, there were problems. These were eg: long straight lines to certain points, no turn instructions till the last ca 2 km, recalculation didn’t work correctly (was on automatic as it’s said this should work on the XT). After some investigation I believe the problems were mostly due to eg unpaved roads (which are already avoided max), shaping- or viapoints which were not exactly on the route, little unknown roads, … So basically most of the problems are because of differences in the Kurviger maps vs the NTU-maps used by the XT. I know it’s possible to use Basecamp to get this right, but that’s a lot of extra work and what I just wanted to avoid (import track in BC, make direct route with extra viapoints, change to motorcycle profile, check if each (!) viapoint is exactly on the route, make a track, export route and track to XT …). So Kurviger has no real advantages for me when I have to do this for each route. There’s a shortweek trip planned shortly, and I want to avoid that I can’t ride most of my planned routes because of this problems.

Sorry for the long text above, but I wanted to be clear. Now my principle question: can anybody help me on how to get a track to my XT which won’t cause any (or close to any) problems because of differences in the used maps (used by Kurviger vs the NTU-Garminmaps)? I know how to export, import, … so that’s not the question. I’ve also read the different docs concerning OSM & possible problems in route calculation, issues with turn instructions, … but I’m looking for some tips&tricks to avoid as many problems as possible (without having to use Basecamp).

Many thanks in advance and BR

I would say the problem is that when you import the GPX file to your gps it recalculates the route according to the maps or routing data and obviously it does so according to the information on your gps.
If you look at the TRACK of your file you will see that it is really what you have generated from Kurviger.

but I’m looking for some tips&tricks to avoid as many problems as possible (without having to use Basecamp).

Maybe you could put more viapoints to force your XT program to use it to calculate the route.

hi
thanks, some reactions:

In order to create a .gpx file for co-riders with as little effort as possible (because I use the Kurviger app on my smartphone), I “developed” the following procedure: 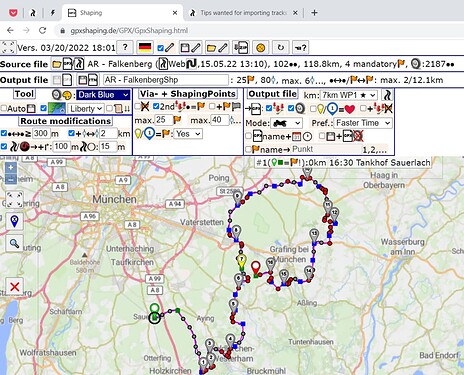 Thanks, but what exactly do I have to do after importing the .kurviger file? Export as .gpx? And with which settings? (sorry, as I’m not familiar with this website/tool).
Only I’m afraid this won’t solve my problem on the differences between the kurvigermaps and the garmin NTUmaps, or am I wrong?

Yes! (There is a excellent helpfile in this website)
Sure there are differences between the maps (therefore I use kurviger app). The “trick” is, to provide a route with enough waypoints and not Garmin let define the waypoints based on just the track.
Okay - even with my procedure there isn’t a 100 % guarantee to get the exact route - but it’s close!

Ok, I’ll give that a try (can’t test right now), does the .gpx contain the route, track and/or waypoints?
To be honest, in most cases - although it would we nice - there’s no need that the routes follows the track 100% (when I ride alone or in front, I’ll find my way).
My main issue is that there occur problems while riding (like straight lines, missing turn instructions, …) and that’s very frustrating, due to map differences. So only check in Basecamp would be 100% sure?
PS: I don’t think adding waypoints will solve my problem.

So only check in Basecamp would be 100% sure?

Bart,
no idea - I never used BaseCamp and never had a Garmin device. But friends said with “fastest route” and “recalculation off” it’s okay.
I didn’t hear of “straight lines” or “missing turn instructions” on my tours.