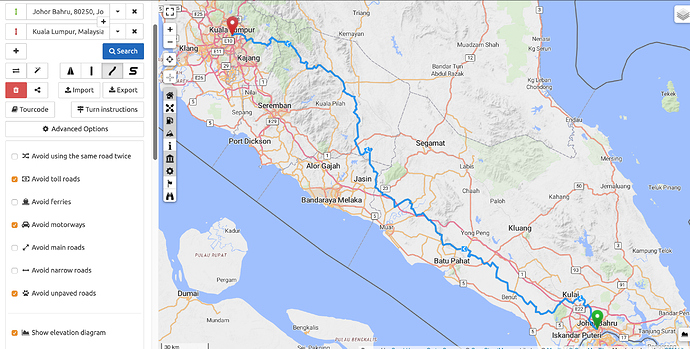 [EN] Description of the issue and how it should work instead:

I wanted to find a nice route from JB to KL. Without the ‘avoid motorways’ option it already did so, but then I clicked’avoid motorways’ and it selected a much different route, even though the original also had no motorways (in real life). it could be that some small segment in the original route is marked as Motorway in OSM maybe? (how would one check)?

it could be that some small segment in the original route is marked as Motorway in OSM maybe?

e.g. here near WP1 is a segment marked as “motorway”
I found this by carefully looking at the color of the road on the map.
(I prefer “Kurviger Liberty” map style.)
If in doubt, you can “right click” and than “show on OpenStreetMap” or “show on Google maps”.

In addition to @linux-user’s answer. This might also be an issue of our “motorway classification algorithm” and possibly related to this thread: Make road Categories selectable

I will look into this and introduce a completely reworked algorithm that provides better results in the future. In the meantime I can check if I can provide you with an improvement for your current situation.