On rare occasions navigation stops working and no recalculation is triggered any more.
This week i had a similar issue as described here but with new phone

Kurviger had navigated me to munich, then throughout the day other apps had been used. 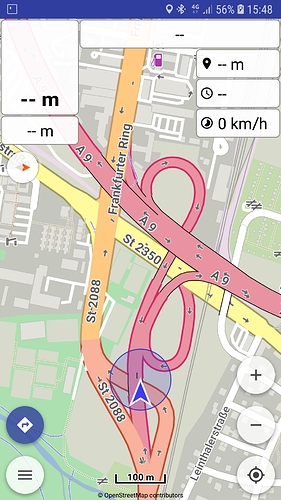 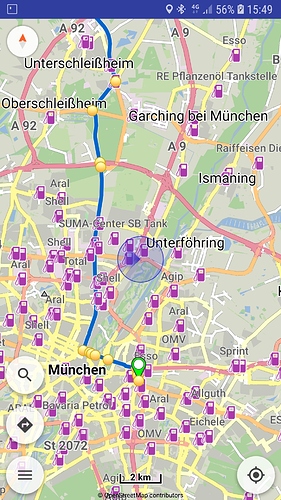 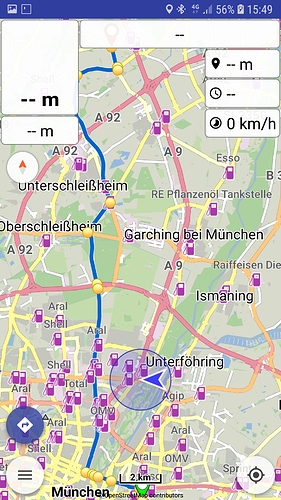 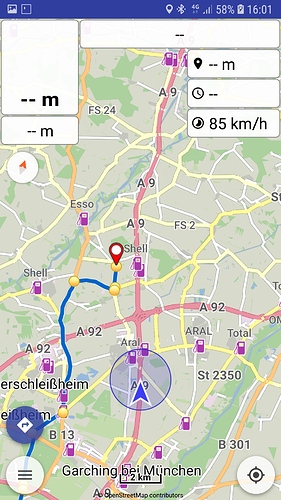 Thanks for the report!

There, the rerouting was enabled and was not triggered?
How was internet connection, any (spoken) warning?

There, the rerouting was enabled and was not triggered?

Yes, exactly. At this time navigation had been stopping working for maybe ~15min/~10Km.
Even after “stop/start navigation” no rerouting was triggered (as you can see on screenshot).

Later (at ~16:03) I stopped the app (double back) and started again.
After that the route was instantly recalculated and navigation was working again.

How was internet connection, any (spoken) warning?

No warning I could remember of, and munich usually has excellent internet coverage.

Hmm, one thing that might be contributing:
The start point on the screenshot was the last time a successfull recalculation had been taken place.
After that I was traveling through a longer tunnel. So no GPS for some time (I think there has been a warning about missing GPS)

Screen was on and app in foreground the whole time from “point 1.” onwards.

@devemux86 just a thought:
What happens if you loose GPS signal (±) at the very moment you would detect an off route situation?
Maybe in combination with Kalman filter?

What happens if you loose GPS signal just (±) at the moment you would detect an off route situation?

The off route detection is only triggered when getting off route significantly. So, short GPS signal loses are usually not an issue. Longer tunnels, might be detected as off-route though.

In case it’s relevant, I try to make my above answer more precise:
Screen was on and app in foreground from “point 1.” onwards of the above report.
Before “point 1.”, during the day, the app had been “running” in the background most likely (navigation off).

I occasionally had the same problem. Sometimes kurviger pro stopped while driving. Often after breaks when GPS has been turned off to save power. You can see it, because no next turn is displayed, etc. You have to quit the app and restart, then everything works again.

Thanks for the feedback,

Often after breaks when GPS has been turned off to save power.

Can you describe that workflow, how GPS is turned off?
By user or battery optimization, app is still active or in background?

Okay, I tried it again. The problem comes when I turn off GPS. After switching GPS on again, the route is still displayed but no longer calculated. The turn information is missing, see picture. There is no more route announcement.
I have to quit and restart the app. Then everything works again. 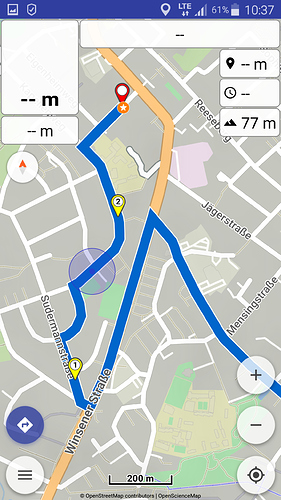 I have also had this problem sometimes. It does seem like it looses GPS in an area when it happens, maybe too many trees for a clear signal.
I can not find anything in which my phone shuts down GPS to save power and have no apps to do this. A riding friend has same problem on same ride and seems to happen to him at same times. I am thinking this app gives up or gets hung when it can’t get a GPS response for a while.

A riding friend has same problem on same ride and seems to happen to him at same times.

Do you both use the Kurviger Pro app and at more or less the same time the app doesn’t recognize that you are on the route? It would be interesting if you could provide a case that provides an option to reproduce this situation. So far this issue has been non reproducible and seems to occur very seldom.

Both use Kurviger Pro and we both updated it sometime this year to the newest version.

Yesterday, only my friend had the issue, but it may have been caused by all of the following together at same time:

We ride on back roads and on some routes, the Kurviger route does not track with the road and could be off 10-20 feet from the road or more. Been slowly fixing them on OpenStreets.

Today I had the same problem: after taking another way than the original route was planned (due to upcoming rain I wanted to be home soon) I triggered a recalculation of the route. A new route was shown and I also had a GPS signal, but no turn instructions any more. Even after switching between navigation and follow mode or triggering another recalculation.

I made this screenshot after returning home: 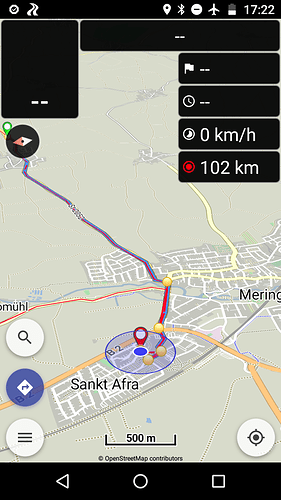 I’m pretty sure I manually triggered the first recalcution of the route in an area where I have no data connection. Maybe this could be the reason for the problems with the missing instructions.

3 posts were split to a new topic: GPS loss at navigation

is this tread still active?

This thread has reports for very old app versions, so mostly it’s irrelevant to present.

I’m pretty sure I manually triggered the first recalcution of the route in an area where I have no data connection. Maybe this could be the reason for the problems with the missing instructions.

Then nothing should happen or will repeat rerouting later (if enabled).

The whole thing with online routing issues is really frustrating, isn’t it?
Let’s see how offline routing can improve many of these corner cases.