I have installed Kurviger Pro on an Android phone but cant transfer a route. Tried QR code and also a link via mail. Kurviger opens and sais “kein Treffer”

Please see the documentation for how plan routes on desktop and transfer them to app.

Can use also the kurviger format to save / load routes when offline, see documentation.

I thought I had followed the instructions and on the phone when clicking on the link in the email with the link to the route, Kurviger Pro does open but states “kein Treffer” ( no hit) So Kurviger Pro is not finding the link.

Same when using the QR Code. If that plays a role I am still at home and not at the starting point of the route. Maybe that plays a role but I thought I should be able to plan routes, save them in Kurviger Pro and then use them, when needed.

not sure which Android, its an older Samsung Phone.

Please check the about screen in device’s Android settings, it’s important to know the Android version.

Android has unfixed bugs in older versions with websites and secure connections. If that is the case, we could search if somehow can fix Android in app level.

Or can copy here what the Info screen in app “Settings | About” shows.

(moved in new topic, being a different case)

Android 4.X has issues with Transport Layer Security (TLS).
Expect a workaround in application coming with next version. 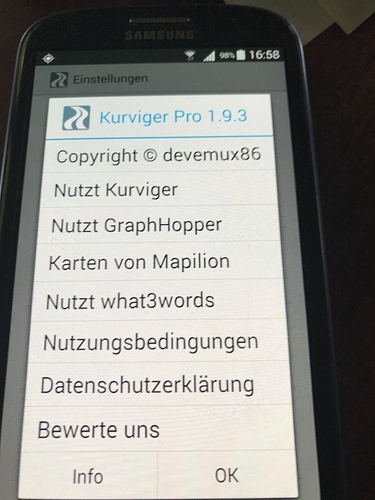 thats what shows the phone

Press the “Info” button, that screen contains the details.

my son is cleverer than me and we found e way to export and imoprt via USB cable. What I am not sure what is the best optin to chose, track, waypoit or route. And then on Import whatis the best way to find out how many waypoints to add.

(until Android problem is fixed in next app version)

For now can use also *.kurviger format. It contains the whole route with all its options and can be used offline. (see also documentation)

@Martin_Sellschopp can test Kurviger 1.10 (Beta) to see if issue is indeed resolved?