For example you have to go off the route because of a road blockage. You have a waypoint on the road blockage. Now you get back to the route and did not visit this waypoint. Should Kurviger try to route you back to that waypoint? Certainly not.

It will with strict route following, there cannot exist and should not wait any flexibility there.

No, don’t just think about this specific scenario. Think about other scenarios as well. For example you have to go off the route because of a road blockage. You have a waypoint on the road blockage. Now you get back to the route and did not visit this waypoint. Should Kurviger try to route you back to that waypoint? Certainly not.

Of course if I talk of an option 4 I would like to also have the manual options via the context menu available as told.

I there is a road block, I still can use avoid roadblock and if I need to skip 1, 2 or more wps, I would like do this manually, not automatically. 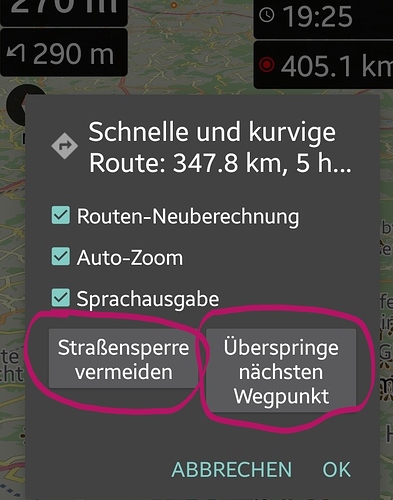 I understand your problem description. But I can’t reproduce it. So I can only guess why Kurviger didn’t tell you to turn. At that point you already started to change your planned route.

I was not starting to change the route, I just missed the right left turn from 2 which are close together and this is exactly what I expect a navigation system to correct for me by telling to return and guide me to the path back of the planned route.

I can’t reproduce the behavior you describe, so I have no idea why it behaved that way.

I guess you are talking of the change between wp4 and wp5, but what with skipping wp 7,8 and 9? There is no reason for doing this.

It will with strict route following, there cannot exist and should not wait any flexibility there.

Not automatic, but hopefully still manually by using the context menu.

@devemux86
since this is really important for me, can you confirm that even with an option 4 - strict follow route the manual context options will still work?

What I like for example much better as in Navigon is that the wps are numbered. In Navigon Cruiser for example you can also set many wps and they are strictly followed. It always guides me to my planned unvisited waypoint

and if I want to skip a wp I can on the run, not needing to stop, just wipe to the left

Screenshot_20200420-141729_Cruiser 1720×1480 116 KB
and use “Aktuelles Ziel überspringen” (skip next waypoint) and directly get a new calculation. If I want to skip more wps, I just use this quick link again. If I want to check the result I just use “show complete route” and can see that it was correct and follow my way. It’s a matter of seconds, not needing to go into submenus or to stop driving.

Navigon Cruiser has other issues for examples it get stuck sometimes when using overlaying apps. Kurviger is stable and doesn’t get stuck with overlaying apps… big benefit. If this option 4 - strictly follow route (with manual skipping wps option via context menu would come into Kurviger I am the happiest motorcycle driver in the world.

can you confirm that even with an option 4 - strict follow route the manual context options will still work?

Cannot make promises for unimplemented features, we’ll see in the future what is possible.

I had to stop and re-import the planned route… but it doesn’t brings me back to wp5, because it has “forgotten” that I had already visited all wps …

That is obvious to me.
If you re-import the route, the app cannot know that you had already visited some of the WPs.

I had a similar issue, while testing “next unvisited WP” feature.
That’s why I suggested to change the behavior at navigation start.

A post was merged into an existing topic: App: rerouting options at start of navigation

What I do not fully understand is that you say to plan another routing option for strict follow route (no automatic skipping, only allow manual skipping and manual rerouting around stoppages).
If you now made additonally mandatory viaPoints and optional shaping points working in the “next unvisited waypoint” mode, isn’t this already the strictly follow route mode with no skipping and abreviations?

On Sunday I have planned another 420km complex roundtrip but I avoid crossovers and also using the same road twice, because I have again 7 hot headed motorbikers behind me which I don’t want to curse my back

. Nevertheless the route contains many theoretically possible abreviations. Will it work as expected means NO skippiing and no abreviations of the route… if I suddenly or unwillingly take a detour and am off the route, will it then guide me back to the route or skip waypoints even if I have NO shaping waypoints defined?

Rerouting has not changed, continues to be flexible as described here.

Like described also here, is from next waypoint, with all types included.

So this means the mandatory waypoints are not meant in sequence, wp1, wp2, wp3, …? It could happen that if I am getting off the route by accident, that it skips a mandatory wp in sequence to get to another mandatory wp which is maybe not in sequence, for example it guides me from wp10 to wp21 if this is near to the GPS position, right?

This means also, I should better deactivate automatic rerouting if I want to strictly follow the sequence of the wp’s and manage the way back to the route myself, right?

It depends if the phone is online or offline, which means it has Internet. With internet the recalculation would be with the profile that is set in the kurviger app. Without internet it is, as far as I understood, always the “fastest” profile, no matter if Brouter or GraphHopper. So there would be different ways to get back on the track.

I have deactivated the automatic recalculation,

I think I also have to do this then.

if necessary you can use the warning triangle.

but this has the same effect on a complex round trip. It will skip mandatory waypoints in sequence.

Seems that I have to further yearn for the option strictly follow wps in sequence (allowing just manual skipping wp’s and stoppages).

It could happen that if I am getting off the route by accident, that it skips a mandatory wp

Usually it does follow the WPs in sequence.
The tricky part comes, if you enter (by accident) another part of your route, which can happen if parts of your route overlap or are crossing each other.

Then the (intended) flexibility of the app may trap you. The app sees, that you are on your planned route, and does not route you backwards, to WPs that you might not have visited yet.