There we discuss a proposed feature to improve some cases, not user reports.
Those have already their own topics and can continue their discussion in them.
(I moved the posts here)

maybe this helps a little bit… this is from the GPS recording and the strange thing is that there are gaps of recording… can this maybe be connected to the strange behaviour?

Thanks for the image.
What location service did you use (Android or Google)? Was Kalman filter enabled?
Generally “Google” is recommended (by them) as more accurate and battery friendly.

At those areas with GPS gaps did navigation work?
Because lack of GPS can lead to “Route missed” messages and no navigation.

What location service did you use (Android or Google)? Was Kalman filter enabled?
Generally “Google” is recommended (by them) as more accurate and battery friendly.

Android (thought this would be more precise). Yes, Kalman filter is always enabled.

At those areas with GPS gaps did navigation work?
Because lack of GPS can lead to “Route missed” messages and no navigation.

good, but difficult question, since I don’t know exactly any more where it was, but it was on the way back, could be this area. When GPS lacks can lead to this route missed, I guess this was the reason then for not recalculating the best way to the destination after having skipped all waypoints.

I will observe this next time on the road.

Android (thought this would be more precise).

If you can, please try next time the Google location service.
To see if can offer an improved experience on your device.

I made another tour with Google location service instead of Android (what is the difference between both?).

This is the tour. We started near Oberkochen in the Swebian East Alb and the destination was also set there. It was a round tour.

The tour was good until I got to Monheim where several road stoppage occured. Driving through them was not possible. 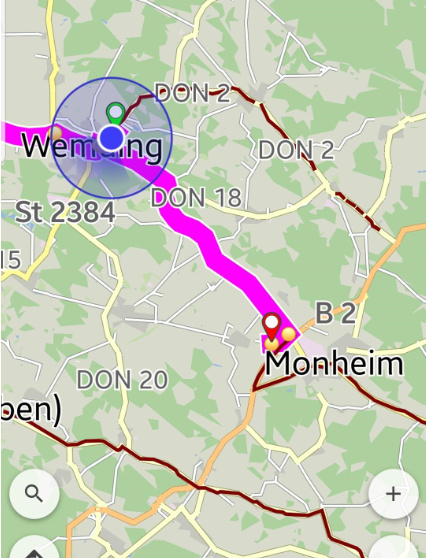 I first tried to find manually a another way, but there were also road stoppages. I had to make a bigger detour. Because it was difficult to identify in which direction the gps showed and I couldn’t bring it in line with the reality, I used the skip next waypoint function to get a new calculated route around this. I even stopped and made new waypoints too. Nothing helped, I didn’t get calculated a correct route back to my destination.
In the screenshot you can see that the gps recording didn’t happen for quite a while. There are many lacks in between, but the gps signal was not lost, it was active on the screen all the time and moved correctly.

The usage of skipping waypoints some times more then resulted in the exchange of my destination from Oberkochen to Monheim. I wasn’t aware of this while driving, just saw this after the tour. I had to stop using kurviger at this time and used my other app Navigon Cruiser to easily find my way home, because I was bugged out by this behaviour and didn’t want to lose more time to guess what happened. 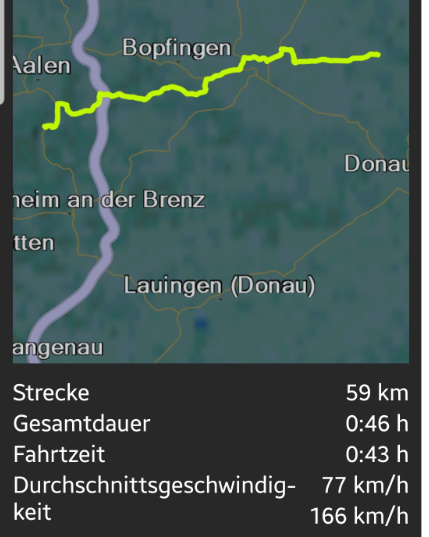 The movement of the destination to antoher area is a big error in my point of view and should never happen. The destination should NEVER be deleted by skipping waypoints. I hope this can be fixed.

The strange thing is also the lacks in the gps recording. Here the change from Android to Google location service obviously didn’t help because in the previous tour the same problem happened with Android location service.

My setting for GPS recording is this

Could the lowest recording speed maybe be the problem? This is set to 3 km/h which is pedestrian speed. When the app cannot identify the correct speed and therefore doesn’t record?

I made another tour with Google location service instead of Android (what is the difference between both?).

Can see Google’s description for their location provider versus Android native one.

The destination should NEVER be deleted by skipping waypoints.

That cannot happen.
Skip next waypoint just skips next via point (if exists), while destination remains always the same.

My setting for GPS recording is this

If GPS sensor on some devices reports unusual readings, they could not pass the GPS logging filters depending on their values.
In such cases can relax or disable some filters and keep the basic ones, mainly time interval and maybe minimum distance.

That cannot happen.
Skip next waypoint just skips next via point (if exists), while destination remains always the same.

ok good to hear. if a developing error can be excluded, then the most possible thing what happened is that the wrong menu entry was used. 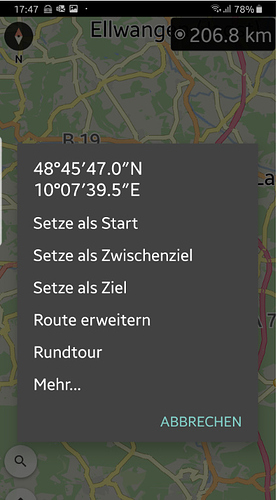 But then we come to another problem or request reported earlier in another post… the context menu entries are too close together and the touch areas are not usable pinpoint. The font sizes and rectangular sizes should be much bigger than they are now in order to not use the wrong entry with the touch capable gloves. Also good would be that a borderline is drawn between each submenu.

here a screenshot from Nav. Crusier. The separate BIG Action Menus are reached by just swiping to the left and the functions are also customizable.

I can use for example

and the action menus are BIG enough to not accidentially use the wrong one while driving.

Couldn’t you built something similar? This would really help a lot while driving, simple and uniquely usable with motorcycle gloves.

That is already mentioned before and is discussed in:

Since the Kurviger app is made to be used on motorcycles I think it would be a good idea to enhance the menu by using big buttons instead of simple lines of text. Of course these text elements can be made bigger by changing Android’s setting (like recommended here). But this changes the whole system GUI what could be unintended. Buttons would offer more size and recognizable symbols and therefore could be operated much more comfortably. Additionally the “all menus in one sidebar”-design could …