Often you have a route which is a roundtrip (maybe downloaded somewhere or received from a friend) you want to drive.

But due to the fact you’ll start from another location, you want to rearrange the route by setting one of the waypoint as the new starting point and then arrange all the other points accordingly (keeping the same order as before, but with the selected waypoint as starting point).

That would be a very helpful function for the Kurviger app (or website).

Robin, thank you for the hint - really didn’t notice that yet!

Any chance to integrate such a function in the app, too?

Currently the long press on waypoints is used for their dragging.
So either that could be integrated in waypoints menu list or later when the waypoints management on map will change.

BTW what Robin described essentially alters / divides the route, it’s not a complete round trip anymore.

BTW what Robin described essentially alters / divides the route, it’s not a complete round trip anymore.

Yes, I noticed that when I tested the function yesterday. No connection / routing between the new starting and and end points (which is in fact reasonable). In my opinion it’s still absolutely OK this way, because shifting ALL the waypoint into a new order would be pain (which is the reason why I’m looking forward to have it in the app too, in the future).

Conceptually that is split the route on one of its waypoints.

It’s implemented in platform and working on Desktop (right-click).
Need an elegant way to introduce it on Android too (i.e. Kurviger).

Need an elegant way to introduce it on Android too (i.e. Kurviger). 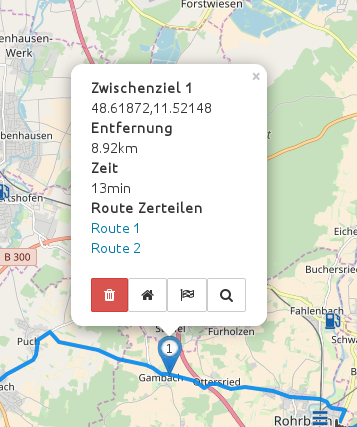 Hello,
working with https://kurviger.de
this feature is the most needed feature when I work with gpx files as round trips from other Websites to adjust them to my starting and end point (I.e. my home or temporary hotel)

Here my way (algorithm, it is still a pain):

I guess that the from Robin described way to set the start and end point would even reduce the effort. An algorithm from step 1 to 7 would be great in order to reduce tour planning effort for me.
In a new feature on the website I only see a Button and a field where I fill in the new starting point😉
Best regards
Joachim

Not sure if I understand you correctly. If you want to rearrange the route, you can do the following:

If you want to extend a route, you can right click on the map and extend the route to that point.

If that’s not what you are looking for, could you try to describe the issue in other words

Hello,
you understood my completly right. This is the solution to reduce the effort of rearranging imported routes. You save me a lot of time in the future. It even works on my iOS mobile phone.
Thanks a lot
Best regards.
Joachim