Problem with charging my phone

I use the app on my motorbike, on my motorola G6plus phone.
I am a long time fan of the app and why anybody would still use a separate GPS device is beyond me.

Having said this, I do have a nagging issue with my phone not charging well using the USB port in my Honda Transalp 650.

Before I explain any further → I assume this is totally of topic or can I ask this here ?

I’m desperate to find a solution and I assume that all users use their phones like me so I can’t be the only one with this issue ?

Hans,
I had a similar problem with a Sony Z5. It was due to the USB plug and the too thin cable. After I bought a Quick Charge car charger (mine is from revolt) and a fast charging cable with a larger diameter (UGREEN with 20AWG) everything works fine.
VG Wolfgang

using the USB port in my Honda Transalp 650.

Does the Transalp have a USB-outlet or do you mean a USB-charging-adapter plugged into the 12V outlet. Many of those (cheap) USB-chargers do not deliver the current ratings they claim.

Another issue I had in the past, was that the charging adapter didn’t fit tight enough and lost contact from time to time.

This one is working for me

Use the App Ampere to check different cable. There are big difference between the cables.
Hope this can help.

Another solution is to buy a ruggedized phone: more protected from heat, rain, with a powerful battery, etc. and keep the usual phone to make calls, photos, etc.
In the long run the USB connectors are damaged, the camera with the footsteps is damaged, …
I use a 10,000 mAh one and I don’t need to plug it in all day;)

I did have the very same issue. My phone (rugged with a comparably large battery) consistently got discharged as it was used during the day. The reason is that the display is always on. My solution was to use a more powerful charger and a proper cable. Also, cables tend to wear off over time so need to be replaced occasionally. The charger I currently use is called Optimate O-108 and is connected directly to the battery. Before that I had tried one of those chargers, which directly plug into the bikes 12V socket (can"t remember which model it was) but had no luck with that.

The transalp is an old bike so originally it has neither a 12 volt outlet (cigarette lighter) or a USB port.
What they installed on it is something like this, with 2 ports, nothing special : snelbalie
The mecanic told me they always install this type, without issues.
The fit of the USB cable in the phone is ok, that is definitely not the issue.
My battery is just 3200mAH.
Thanks for the Ampere app tip, that is great advice, I will go for a ride soon and report what current I see.
As for replacing the USB outlet alltogether, maybe that is what I should let them do … a bit sad that I specifically explained my issue and they did not mention fast chargers or difference in charging capabilities between USB systems and just soldered/connected the one they always offer.
Otherwise I would have chosen the stronger type.

What can be done to save energy @ navigation ? (Actually = none).

A. Most energy saving.

During most of the navigation the display is off .

B. A less energy saving alternative ?
@Devemux86
Can this be done or even do you eventually want to ?
Yes I know, this also means another extra setting menu

There are some discussions (no decision) to see:

Hello, as already written elsewhere, the battery of my Samsung Galaxy Note 4 deflates despite connected charging cable, especially in cold weather. My idea to save power is that the app turns off the display while driving and automatically turns on again just before the next turn (or instruction). This could be offered as an option. Hallo, wie an anderer Stelle schon geschrieben, entleert sich der Akku meines Samsung Galaxy Note 4 trotz angeschlossenem Ladekabel, vor allem bei Kälte. Meine Ide…

they installed on it is something like this, with 2 ports, nothing special : snelbalie

If that beast really can deliver 4A, that should be more than enough.
I think anything that is able to deliver 2A should be sufficient.
Smartphone with running navigation typically needs ~1A.

it’s not the exact one that they put on the transalp . Anyway, today I took a good look at my device and it states 5V/2A. I also went for a a ride , more than one hour and managed to juice the battery a a little bit during that time (kurviger app running most of the time) - as you can see on the Ampere app screenshots. 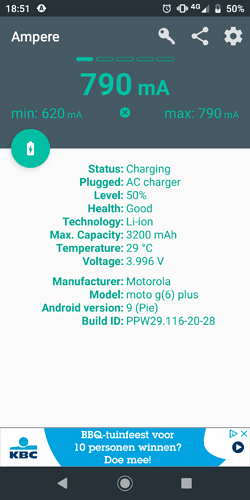 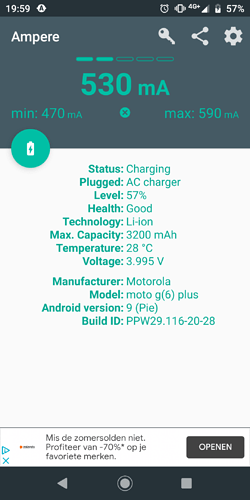 The mA was between 350 and 800, it seems to be different every time I stop riding (keep engine running) and check the app. Later back home on my 3A wall adapter the current is 2000mA or more and also very stable. (I conclude from this, that at least the cable is ok)

My phone consumes around 500 mA with full brightness, acccording to the ampere app.

Not sure what to conclude from all this !

This would be no option for me. I want to have the display at maximum brightness all the time and also no black screen while driving. As an additional option, yes that’s fine, but not by default.
If you use a usb device that delivers 3A at 12V you have no problem at all with power consumption. But most cheap devices only have 1,5 A at 12V and this is too less. With my Galaxy S9+ even 2,4A is too less. It has to be 3A.

(I conclude from this, that at least the cable is ok)

If you used the same cable, probably the cable is OK.

If you tried different cables, it might be that the charger on your bike is not strong enough. If it states 5V/2A but only provides 700mA then something might be odd.

This could be due to overheating. This can happen if the charger is not strong enough to keep your phone at 100% - this will create more heat. If you have your phone in a closed mount, you could try an open mount or maybe not closing the case 100%.

As an additional option, yes that’s fine, but not by default.

@Tom.
Of course I suggested this as an option only

Good (universal) power delivery over USB that is 100% compatible with your own phone type is not always that simple. See (google) USB power standards for the various USB bus types already in circulation.Some converters are so cheap that I can’t imagine it being something decent.
Good components for switching power supply converters bought separately are already more expensive.

I used the same cable yes. Next on my list is to try charging a friends phone on my bike and check the ampere app, if it shows the same low mA then a better USB charger is needed. I’m also curious what current his brand new Kawa will put into my phone

As for overheating I thought about that, but looking at the battery temp in the screenshots, this looks ok to me. Also, while using the wall adapter, the battery gets even to 40 degrees. I have a safety cover that leaves the screen uncovered / not a full case. I will leave it aside next time and see what happens.

If that beast really can deliver 4A, that should be more than enough.

They probably mean two ports with 2A each right? 4A would be insane

That is super low, even my battery starter emergency pack can push out 1490ma

I wanted to give an update about this issue, wo knows maybe it can help somebody.
Went riding yesterday with a friend. I used my tomtom rider all day and that was good. But at the end of the day I thought ok let try to navigate home with my motorola G6 using kurviger.

So in this case my setup works totally fine and yet I know for sure that this will not stay like this when I go out next time. Should I get a new USB system or a new phone … I have no clue …
It seems there is another parameter that I dont understand but I have no idea what

And what was the result?
Which phone did loose charge level after some time?

I dont think its a loose contact because whenever I have problems, then my phone is still charging, but its on “slow charging” (and its either contact on or contact off I guess ???) and I tried many times taking the cable out, then back in, trying both of the USB ports, another cable etc … it just stays on slow charging. (the only solution after that is putting it on the wall charger)

Does anybody know of a good charger supporting quick-/fastcharge? The one I currently use (optimate) only supports 5V output and is thus limited to a maximum of ~10-15W charging power. And even that is only available if the cable can handle it. The newer standards support charging up to 40W (4A at 10V) but I couldn’t find any charger, which can operate at 12V input voltage.

Does anybody use quickcharge on the bike already? Any hints appreciated.