If I buy the Pro version, can I download maps - have them on my device - and they will work if I have no cell service?

Can see more also in offline maps guide or documentation.

We work on offline routing for a future version.

Hi Scott,
in other words:
You can store many pre-calculated routes on your device.
The App can guide you along those routes as you expect - completely offline.
But if you deviate from the route a new route can only be calculated with internet connection

If select a pair of routing services,
then Kurviger is used when be online and the offline router when be offline.

Regarding navigation the guide clearly mentions:

“Navigation : offline rerouting happens when you leave the current route and trigger a rerouting (automatic or manual), skip the next waypoint, avoid road blocks, etc. while navigating without internet connection. The route is calculated from your current location to the existing route (based on rerouting mode). Only this small part of the route will be recalculated and merged with the previously planned route. This ensures, that the rest of the route remains as initially planned.”

You can try both and select the one that is best for your needs.

Maps and Routing are two separate and different things: 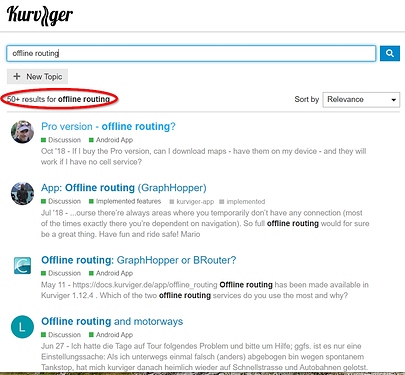 For offline-routing! Is also in the documentation. I kept to it and there were no problems. I’m using Graphopper because I didn’t want to install a separate app.