From my home (49.889106,8.265004) I let the app calculate the route to the starting point, so far so good, the original route was retained and the journey was added to the total distance. On the way to the starting point, I deviated from the newly calculated route because I still had to refuel. Then the route was automatically recalculated several times, but the route became significantly shorter with each calculation (20-30km per calculation). I then switched from navigation to planning mode and saw that there was not much left of the original route. What did I do wrong? Kurviger 2.2.18, Strict Route Navigation active, Route Recalculation switched on.

I was able to solve the problem simply by reloading the original route into the app - but why is the entire route changed if there is a deviation from the route calculated to the starting point?

Rerouting to route’s start can happen only when starting navigation away from the route.

Did you have internet or BRouter calculated a fastest route until next waypoint?

It would be useful to present the locations of the reroutings and the (re)calculated routes,
so we can understand / reproduce the report.

unfortunately I did not take screenshots of the new routings. Re-routing was done via Internet Connection (via Bluetooth hotspot), at least I did not saw a hint that Brouter was used. Routing options: extra curvy route, but I thought this is only effective in planning mode, not in navigation mode…?

However, I can reproduce what I did, but to support I need to know what exactly I shall log. Is a screenshot of the new calculated route enough or shall I export re-calculated route in *.kurviger format?

Routing options: extra curvy route, but I thought this is only effective in planning mode, not in navigation mode…?

Route calculation is the same everywhere.

shall I export re-calculated route in *.kurviger format?

When everyone reports something about navigation,
it is needed to have the route(s) and user location
of all reported events.

today I could reproduce the app behaviour during recalculation.

It seems that with each recalculation the upcoming shaping points are removed, I put this in the pdf file.
recalculated routes.pdf (2.8 MB)

So I learned to never leave the first calculated route to a meeting point and rely on recalculation. Not really an issue, but good to know and to store always the desired route in *.kurviger format on the mobile used as navigation device. With the option ‘strict navigation’ I thought that the route to the start can be modified in case of deviation, but I did not expect shaping points or waypoints of the original route to be removed.

[edit]according to traffic conditions I could not stop exactly after each recalculation, therefore sometimes more than one shaping point was removed prior I could save the new route[/edit]

Thanks for the detailed report!

It looks like an unexpected behavior, however I must first analyze your examples
and try to reproduce it, so I can see internally what happens, before saying more.

Did you notice if 1 or more than 1 waypoints were removed?

I see the from 1st recalculated to 2nd recalculated file the start point and the following 5 shaping points were removed, you can see this in the attached pdf: 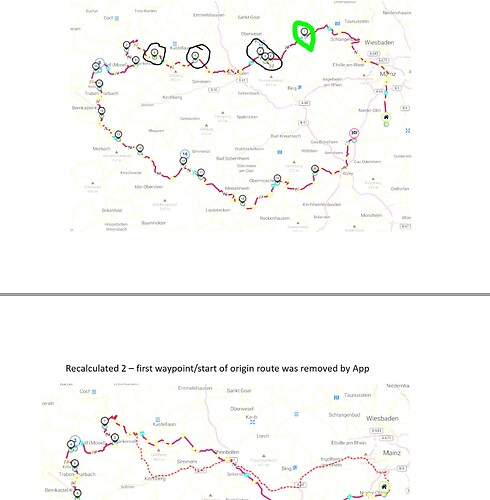 Do you have the old Kurviger 1 Pro to make the same test?

You can also revert to the public Kurviger 2.1 to test again,
but that involves more steps.

Have you tested without “Strict route following”?

Yes I have, but on another mobile. Would the Android version (9 vs 10) influence the result?

Can you export the app settings with “Settings | Preferences | Export” and provide the *.pref file?

Yes I have, but on another mobile.

Would the Android version (9 vs 10) influence the result?

Navigation should be the same on all Android versions.

Internet was available via Bluetooth from another device?

I have both Routing Services activated

I must not upload the *.pref file, the format is not allowed.

Internet was provided from another device. No hint during recalculation that Brouter was used.

I must not upload the *.pref file, the format is not allowed.

I authorized the .pref file format in the forum.
Can you try again?

App version of the old Pro Version: Kurviger Pro 1.14.21 - shall I retry with this setup?

App version of the old Pro Version: Kurviger Pro 1.14.21 - shall I retry with this setup?

If you have free time and will to make an extra similar test.

I’ll study carefully your examples and see if there is a regression or something else.

Will do, but I cannot promise to save the recalculation at exactly the same coordinates - however, will keep you posted

No need for detailed saves, just to see if you can repeat the same behavior.

Done, was really a hard piece of work to take a ride in such environment 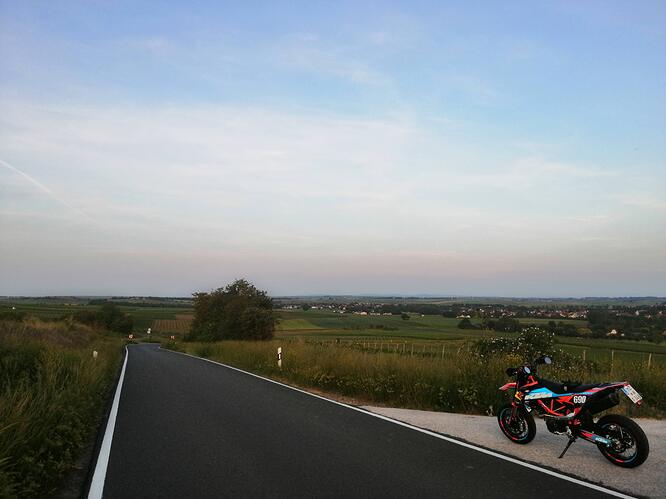 So the Pro App did a correct job, all deviations were redirected to the origin starting point. It also did not start the recalculation as often as the beta 2.2.18.
recalculated pro.pdf (2.7 MB)
Difference aside the App: the mobile with the Pro App holds a SIM for internet connection and is not connected via Bluetooth. But the recalculation on the mobile less SIM in planning mode works fine via Bluetooth, so I assume the internet connection is stable (crossing my fingers).

But even if the recalculation would be done via Brouter, should it not also lead to the starting point of the origin route if you have yet not reached it, resp. navigate to the next possible waypoint if your are already on the route?

Thanks for the extra testing!

But even if the recalculation would be done via Brouter, should it not also lead to the starting point of the origin route if you have yet not reached it, resp. navigate to the next possible waypoint if your are already on the route?

I will see what happens in the Beta version.

I can not reproduce your report…

Are you sure you have not removed wayponts, as with skip next waypoint?

Next time can you select only Kurviger in “Settings | Routing | Routing service”?

It would be interesting to use a screen recording app,
to see what actions are performed and what really happens on the screen during navigation.

Have other users seen anything in rerouting like this report?