Been using Kurviger and the pro app for a few months now, but I still get caught out by a few silly things. I searched on this and found some posts that helped. The core question is around setting intermediate waypoints and the dragging them to the path that I want to follow. aka rubberband, etc.

The use case is that I am planning a home-destination-home route with “avoid using same road twice” and “fast and curvy” option. So far so good, except that I almost always get some routing at the beginning or near destination that wanders through sub-divisions and apartment complex roads. Therefore I will click on a point, create an intermediate and then pull back to the main road, should be fine.

Here is an example. I’m trying to just go down Hwy 64 and avoid the small neighborhoods and it routes me all silly. https://kurv.gr/MJ99H

Any hints or tricks to what this noob is doing wrong?

nice, detailed description, much appreciated! But I personally still don’t really get it. Where exactly do you want the route in the example to go? Your waypoints 2 and 3 are placed in the opposite direction of where that big main road is going, it’s a one-way street as I see it in the map data.
and your waypoint 2 isn’t even really on it, I think there’s an awkward side road lying directly beneath it and you’re hitting it. I also see no way for kurviger to go up an on-ramp or something where you want it to go

Maybe you could switch the map style to OSM for a minute please? I think the little direction arrows on high zoom levels may be helpful

Also could you make something of a drawing for me please, showing where you would LIKE to go as opposed to where kurviger goes?
greetings

Thank you for the response. I can see how my waypoints would have been confusing. The reason they are there are because I was trying to drag the route onto New Bern Ave. See the attached pic as you requested.

This question comes after I made the ride, and I am familiar with the area. New Bern Ave the big east/west road near the beginning is actually a surface road. All of the intersections have traffic lights and the ability to turn left/right. My start/end point is a popular gas station. I wanted to pull out and head to the next lighter surface road, in case New Hope Rd. Instead of allowing me to do this, the routing always ends up off New Bern and New Hope and into these little neighborhoods. In the case of the inserted picture it is through an apartment complex parking lot even though there are names on the roads!

If you take my link and just delete points 2 and 3, you will still see the odd routing. I have had this happen to me more than once, this is just a dramatic example. I suspect it is “avoid main roads” along with “avoid same road” options. The sticky bit is when I try to just smooth it out with a few way points for affinity is gets even more resistant and creates rather dramatic routes on side streets. 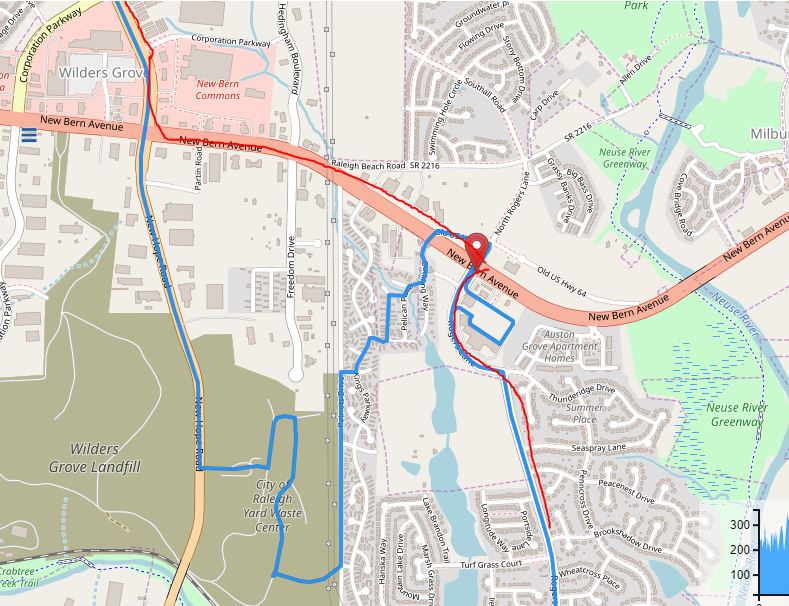 I am not complaining! Just trying to understand how to use this awesome tool smarter. I really appreciate the feedback and the conversation.

Great that you provided a link to your route, so we can see what you are trying.

Let me make a few remarks:

In this first exaple I have changed your options a bit.

In this second example I’ve placed two extra waypoints onto “Hwy 64” to get you quickly out of the city.
Zoom in, to see that these WPs are placed on the outbound lane of Hwy 64.

Let me make a few remarks:

Manfred, I really like both of the options you cooked up and understand much better how they work now. The separation of start and end make a huge difference in understanding how the route will run. The first time I put this down I made the choice to fast and curvy because the curvy route was 25% longer distance and 2+ hours longer riding. The curvy option gave me close to the distance and time I wanted but I did not understand how it influenced the options for routing.

That is why I started this conversation. I figured if I came to understand the application it would be possible for me to use better. Thank you all for teaching me how to operate better in the future!

It is always a good idea to play with the “curviness” option. Sometimes it depends on the area you are riging, which fits better. The (Pro-)App has an option to “show all curvy routes” at once.
To tune the route, place waypoints in the middle of the road segment you want to ride.
It may make sense to split the route into two routes - a fast part, and a curvy part.
There is a feature request to do this in one route .
Use of different routing profiles within one route 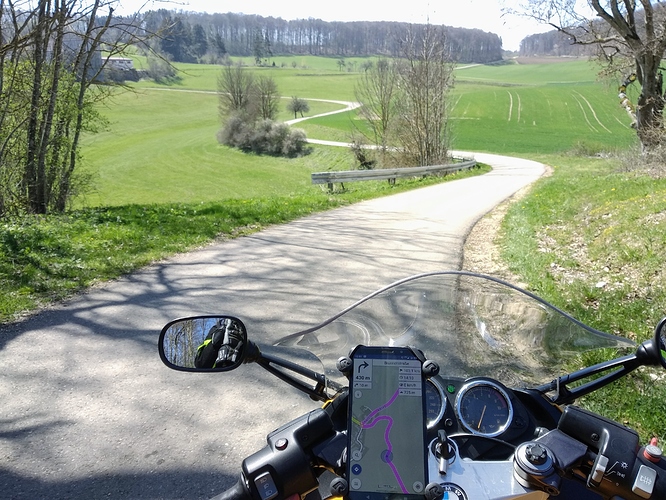