I would like to ask for an alternative position of the buttons. I use the option with hidden buttons. When pressing on the screen they appear on the edge. This is a problem while driving because the smartphone holder prevents the buttons from being operated because they are positioned too much on the edge. I cannot reach there with gloves. Can an option be introduced so that the buttons appear centered on the screen, about 3cm from the edge?

While driving there is also the navigation UI.
And in your example the GPS logging panel.

What about all these?

The navigation UI is wide enough so that I can touch it without any problem also with gloves. It is only the small buttons marked in red which are too close to the edge. The smartphone holder has hooks so that the phone does not fall out and exactly those prevent you from reaching the buttons with gloves. I guess 2-3 cm towards the centre of the screen in diagonal direction should be sufficient. And I just ask it as non-default optional setting. With the “hide buttons” option this would anyway only display them for 1-2 secondes more to the centre. But this little change would help me a lot to use them smoothly.

Other users with similar mounts may have the same problem.

Please post a screenshot with the mounted device, so we can understand better.

Maybe you should change the smartphone holder, then you can also operate the Android launcher:

This is the Smartphone holder from Ram Mount 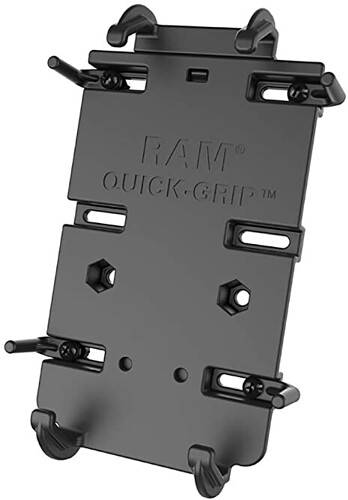 The lower hooks prohibit the proper usage of the buttons. I don’t want to use another holder because this one is very good and i don’t need the Android Launcher while riding.

It could be sufficient to place the buttons 3 cm more up from the bottom and 2 cm more to the middle and I would like to have them bigger (at least 200%, for my need to use it with gloves while driving even better 300%) as a whole if this is possible. If you could make this as an optional setting I am happy.

Please post a screenshot with the app running in mounted device, active navigation and visible buttons,
so we can understand better.

Here come the photos.
It’s just impossible to hit the little buttons with motorcycle gloves. You get stuck on the hooks. 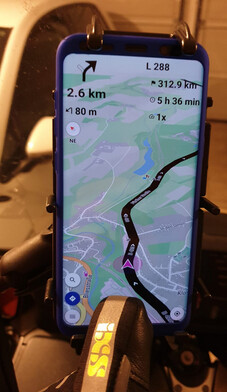 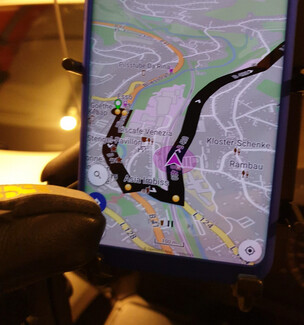 You can’t reach the menu button or the navigation button without taking off your gloves and contortions. And taking off the gloves while driving, even though they are touchscreen capable, is simply sh…

Is this pursuable now with the pictures and can I hope to get a solution for it? It is really impossible to reach the small buttons with gloves. You don’t get close enough to the screen because the lower hooks prevent it.

The features depend on the available developer resources and the interest of the community.

Movement of buttons seems strange or they could be resized. I will think what could be done.

they could be resized

by the way, a good and succesful New Year… Resizing would also be ok, especially when “hidden mode” is used and they get only displayed for some seconds. It would help if they are at least 300% bigger as now (in landscape and also horizontal mode). If it is made as an option and not a general resizing, why not also move them a bit up from the bottom and a bit more towards the middle? It wouldn’t effect anyone else, but help everybody who is using similar smartphone holders.
Many holders, also those that border the edges with rubbers, enwrap the edge of the smartphone so that it does not fall out of the holder and the edges are therefore difficult to reach with gloves.

First of all, best New Year wishes! Let’s be healthy and safe - we and our loved ones!

The proposal to add the ability to resize interface elements - that is, screen buttons - has already been discussed here: Option to scale ui components and buttons

I still find it very necessary, so I sign it with both hands

I still find it very necessary, so I sign it with both hands

I jump in with hands and feet.