I also experience the problem described. But has never bothered me personally, because I have my smartphone on the handlebars.
From tomorrow I’m on the road with new or different smartphone, let’s see how it behaves with it.

Usually the distance to the next instructions decreases gradually.
Optionally an increase maybe could be a trigger for a specific alert?

We should be careful with the various conditions,
as they complicate the workflow and could fail elsewhere.

Example Route
German below
Automatic rerouting is set. The navigation is okay, only the spoken text doesn’t fit. Look at the example. If I drive along the red arrow, it says, in 100m to the right, then in 200m to the right, in 300m to the right, etc. But it doesn’t say: “please turn around”. Only when I turn back are the announcements okay again.
As a reminder: I carry the smartphone in my jacket pocket and cannot see the display, only hear the announcement via bluetooth in the helmet.

Thanks for the image.

Please attach images in the forum posts and include the route url.

But it doesn’t say: “please turn around”.

There is no voice guidance for returning to the route.
There are visual indication and off route alarm in settings.

When you leave the route like in image,
then after a while it announces route missed and a rerouting happens.

Next time it would be useful to see the display and take a screenshot,
so we can understand what happens and the app displays on screen.
(and see the exact location of GPS marker and its direction) 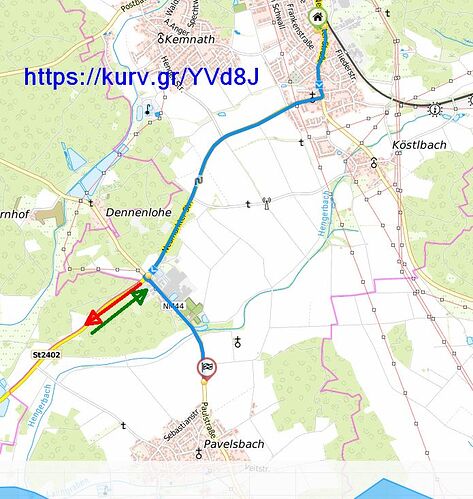 I can confirm the described behavior:

If you drive along the red arrow, than a rerouting would happen.
After new route is calculated, the announcement would be:
“In 100m turn right”.
But this announcement only fits, if you drive in the green direction.

If you continue driving in the red direction then another recalculation happens:
Then the resulting announcement would be:
“In 200m turn right”.
And so on, until eventually a new route towards the red direction would be found.

I can confirm the described behavior

Thanks for the information, now it seems more clear what could happen.

Automatic 1st voice instruction should probably be omitted
and only the programmed instructions must be announced.

(then such confusion can be avoided)

As you ask: I do not know…but next is what I found so far.
180° turn: Turn using the exact same path for a return ! (Mirror)

In the already shown (no sound) video (2’30) notice the ever increasing turn distance.

Example with the Kurviger online router. See video. [Guglingen: We doen een Tommetje.mp4] After the second 180 ° turn refusal, than by auto trigger create an obstruction. By driving further and further, so you therefore should quickly force a new proposal. When you arrive at the junction with the L1103, follow the diversion to the L1110. You now get 2 consecutive 180 ° turns that you refuse. Trigger an autoblock obstruction (Now manually - automatic trigger possible?) You will t…

We cannot halt navigation and expect users to take out their phones and answer questions.

An elegant solution is needed.

Also Kurviger server does not like much the block area function (as heavy),
otherwise I would have already implemented the block area in route planning.

The “Avoid roadblock” in navigation works on the existing route.
(not on unknown road network, which is only known to the server)

Anyway your answer seems more relevant to the other topic?

Scenario : closed route and i have to leave the planned route the part of the closed route does not contain any routing points. it was not possible to stop to operate with kurviger Rerouting was done in offline mode after 15-20 unsuccessfulI rerouting attempts navigation stops and hangs it was not possible to activate navigation again, only restarting of the app helps Suggestions: Would it be possible to stop rerouting after several attempts and wait until either a manual rerouting is done o…

A Yes or No does not mean you have to answer any question or have a talk to you phone.
It means, or you do indeed have a turn maneuver now, or you ignore and simply continue. Roger ?
By the way…as in the video by the block method. I found the result VERY usefull …you do not ?

as in the video by the block method

If you mean the video in the other topic, it is for another report.
Here we discuss something different, unless you think it’s the same.

Why keep mixing user reports like that?
It’s confusing to watch the topics, understand the reports and think for improvements.

Do these belong together? Yes definitely. Optimise both or none.
Both optimization adjustments are so desirable.

Not convinced ? Diversion Güglingen.
Here app: The passage through Pfaffenhofen is blocked. However, not in osm.
If so, Kurviger recalculation would respond more alertly to this.
The motorcyclist keeps driving and so clearly does not want to turn back.
Video now including sound. Listen, don’t watch, phone in backpack. Usefull ? It is not in English, so it is not very useful for most users.

Do these belong together? Yes definitely. Optimise both or none.

The app can not optimize or fix routing issues, please report them in routing category.

No turn instructions for the reverse direction if the distance indication is still increasing.

I already described what happens and the possible solution above.

Tested today:
Now you don’t get misleading voice guidence any more, when riding away from route.
But you may still get many “recalculating route” messages in a row.

This doesn’t seem to prevent graphhopper Kurviger (online) from calculating a route in the opposite direction of current heading.
Here is a simple route example
If you keep heading away from route (as in screenshot) you get one “recalculating route” message after the other. 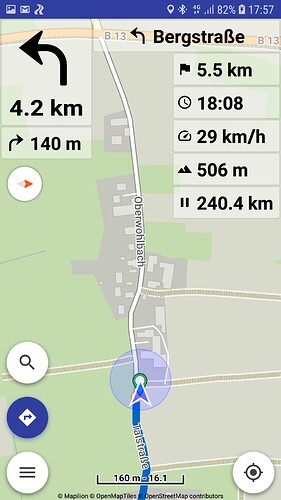 Now you don’t get misleading voice guidence any more, when riding away from route.

But you may still get many “recalculating route” messages in a row.

The app passes the GPS heading (whatever GPS reports) to routing service.
Then routing service is responsible to calculate a route in preferred direction.

I mentioned how to test those routing services with the “heading” parameter:

3 posts were split to a new topic: Heading direction

The voice announcement report for the app seems to be solved.
As this topic has already lost its primary focus we should close it.

This is already covered by the option “Settings | Voice guidance | Off route warning”.

We are talking about corner cases here.
Most of the time, the app is working to my expectations and beyond.
The quality and stability of the app is superior and support is excellent.

We have to distinguish 2 scenarios:

The question is, do users want a “recalculating route” message or not?
The wish for voice info may be different whether automatic recalculation is on or off.

We are talking about corner cases here.

Does the above switch influence this message as well?

This setting is for both cases.