My first impressions with Kurviger

Hello,
some weeks ago I found “kurviger” as a navigation app.

At first: When it works it is a great app and we had much fun driving twisting roads!

Here are my experinces after 1 week with Kurviger in our Black Forest vacation
We planned a daily tour on our Laptop and transfered it to the app via 2D barcode.
I installed the pro Version and tested it in my home area.
The first mistake was, that I didn’t start the tour with the routing button… Okay, beginners failure…
Then there was no calculation of new routes when I left the calculated route - it should be pointed out, that you should install Graphhopper or similar…
But this feature didn’t work on the second try - not sure what I changed, on the third day it worked.
But: We in the Black forest there are many construction areas and redirections.
Some time it worked well but sometime we had great trouble. E.g. after a redirection the app directed us back to Freiburg where we came from and it used the Autobahn - but I had choosen to prevent motorways and Autobahn.
One time we wanted to enlarge our tour so I moved some way points in the smart phone but the calculation was teribble and the app suggested again to drive over a motorway and an Autobahn…

With the planning on the laptop we had some issues to go back to our hotel - the app stated: “Arrived at target”. The only thing that helped was to define an end target some miles away…

In sum it is a great piece of software!

By the way: I tried to test Calimoto - but I wasn’t able to plan a tour. I think the free map was to small and I didn’t want to spend 5 € for one week just to test it…

Thanks for the detailed feedback!

Offline routing uses the “fastest” profile and not Kurviger’s profile or avoid options.

I can examine GraphHopper, if / how some minor customization is possible.

After testing various settings as a quick solution for a simple set of different routing profiles used for offline routing with BRouter in the Kurviger app, I would recommend to save up to three new profiles, according to one’s personal preferences. As template for every profile I used “car-fast.brf” (copied to every of the three bfr-files for Kurviger) and only modified the sections mentioned subsequently.

Kurviger-smallroads.brf If smaller roads are preferred. Modify this section…

Rreading your report, I noticed that it is very focused on “offline route recalculation”.
I think many of your problems were related to the fact that you didn’t have internet.
Is mobile internet in the Black Forest really that bad?
Out of curiosity, what is your mobile service provider?

I would recommend, to use online rerouting as much as possible and use offline rerouting only as a last resort.
Use one of the combination services!
setting | route calculation| routing service
e.g.:
Kurviger (online)
graphhopper (offline)

Hi Manfred,
you are right. We drove offline because I didn’t want to use my mobile phone but an older used one.
This was offline and had only WLAN connection in our Hotel…

Now we use the mobile phone and the result is much better.

But I miss a functionality that I know from Tomtom - a “Detour” button or something like this with a button for a rough distance estimation. Just to say: Okay the detour is 100 m long or 5 Km - or to pick something from the screen…
Very often we came to a detour. Then we followed the detour but Kurviger tried to get us back to the route - this can be very exhausting…

Besides of this we had some strange expieriences:
The first one was that Kurviger send us over a very narrow road that ended in the forest…
The second one send us in an industrial area, parallel to the main road and 2 km later back to the main road - just 2 90° curves to the left and 2 to the right

Besides of this we had some strange expieriences

While navigating, tap on the navigation panel (top left)!
Than an “action” menu appears.
Avoid road block is one of the possible actions 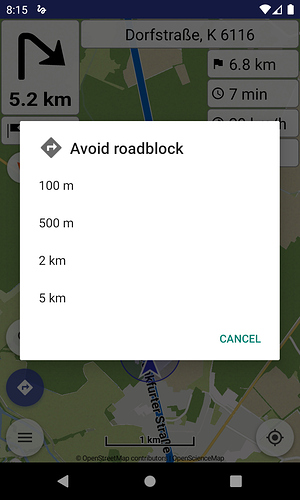 send us in an industrial area, parallel to the main road and 2 km later back