First I’d like to tell you that I really love your app. I found routes and streets which I would never have found otherwise.

Now - my problem
I live ~ Munich West and whenever I want to plan a route towards SW, W, or NW, the routing always uses streets which are parallel to the A96 for several 10s of kilometres.
Those segments are not really ‘kurvig’ at all and I am not sure why they are used all the times. Perhaps you can have a closer look …
There are much nicer routes north and south of the A96
The areas are between Gilching and Landsberg, or between Etterschlag ans Landsberg
ST2348; Inninger Str; Etterschlager Str ; ST2070; B998;

I am just wondering, why do you set all these avoidances? Isn’t the routing much nicer without all these? Like avoid minor roads and avoid main roads is kind of canceling out each other, resulting in weird results sometimes. 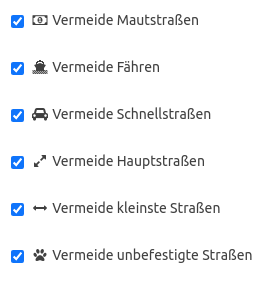 The areas are between Gilching and Landsberg

Would you mind to share the route you would prefer and the route Kurviger is using, preferably only for the “troublesome” part?

I had to do a bit of fiddling to find a better route, for example:

This adds ~20% in distance, which is probably a bit too much for Kurviger, and I am not sure if this would be actually nicer, since I don’t know the area that well.

routing always uses streets which are parallel to the A96 for several 10s of kilometres.

Unfortunately I know this road as well. One of the issues with this road is, that from a data perspective this road is not that bad. For example it has almost no cities to go through.

Looking at your examples, I found that you have checked everything

This makes it difficult for the algorithm to find reasonable routes.
Especially “avoid narrow roads” and “avoid main roads” at the same time, does not make much sense

With a little help, Kurviger finds other routes:

this was no complaint at all.
I know, with additional way points, i can get what I want. easily.
And - in this particular case- playing with all of the options does not make hell of a difference regarding the route. B998 still used for a major part.

However, I just wondered why it was choosen (Ok not a lot of cities, agree) but it is mainly a straight line with some turns over or under the A96.
Suppose Kurviger can somehow measure or determine the “curvyness” of a segment.

So for me it’s ok, but other which do not know the area a lot might find it boring driving 40kms less than 10meters from the A96…

Regards and have a nice Monday

this was no complaint at all.

No worries, I didn’t understand it as a complaint.

However, I just wondered why it was choosen (Ok not a lot of cities, agree) but it is mainly a straight line with some turns over or under the A96.

Yes, and I couldn’t find many alternatives that are clearly better, without accepting a significant detour, that’s why I was asking that you provide a few samples of how you would prefer Kurviger to route. Kurviger rates the curviness of a road as one factor, but it also considers things like cities, which I think is a strong factor in this example.

So let’s go into detail and see if we can improve the route here.

The one you generated is a really nice one:
https://kurv.gr/rSfUp (48km)

If the end point is more to the south like here:


it would be much better to go between the lakes like this one
kurv.gr/uR5v2

ok some more on this as requested:

One issue is of course the Ammersee, where the only convenient route is on the northern coast while riding west.
I figured out, it is very hard move away from the A96 adjacent streets, Kurviger always tries to move the route back

So I sometimes need 4 intermediate points. to stay away

Unfortunately, all alternatives lead to a +10km detour which might not be acceptable for everyone.

So my suggestion would be:

Thanks for the details @Uli_Schlegel. I will see if this situation can be improved. It’s nothing short term, but I do have a few ideas that I could test in the future.

Especially “avoid narrow roads” and “avoid main roads” at the same time, does not make much sense

Hi. Let me interfere in the thread. In my opinion this combination makes sense, because often “narrow roads” are unpaved roads, which is an imperfection of OSM data. We talked about in this thread. Unfortunately, these considerations ended in nothing…

We talked about in this thread . Unfortunately, these considerations ended in nothing…

In my opinion this combination makes sense

The issue is, if you add penalties for main and narrow roads, this cancels the benefit of having a specialized curvy routing algorithm, because all the penalties cancel each other out and the routing result can be anything, but it might not be a nice route. There are cases were it might make sense to use both options, but generally, I would not recommend it.

A post was merged into an existing topic: Avoiding roads with a very low category