Suggest that an optional, adjustable maximum speed limit option be applicable in road routing – extremely useful for 50cc scooters (max +/- 65kph / 40mph) and slower-speed 2- or 3-wheelers, so that they are not constantly contending with high-speed traffic that wants to overtake/pass them. It’s a much-needed safety feature that no other app offers (to my knowledge).

Hi Robert.
What would you expect the app should do?

Maybe this is already doing what you want

Those two options move in the desired direction, but they do not explicitly prevent Kurviger from routing on a 55mph/89kph road (not in my experience with the app, and not in the USA). Given that most drivers (myself included) feel free to exceed the speed limit by 5mph, and my scooter’s top speed is 39mph on flat roads, I would like to limit my scooter routing to roads with a speed limit of 35mph. I envision either a slider, or a setting (like the zoom level settings) where you can (optionally!) enter an upper speed limit.

One important thing that should be noted is that in big parts of the US, especially on backroads, no maxspeed is tagged in OSM. This means that this feature might not work properly, even if we would implement it. Also my expectation would be that due to this feature many routes might heavily use forest tracks to get around roads with higher speeds.

Technically it’s possible, but it’s quite some work, so we would need quite some people asking for this.

Maybe a stronger avoidance of main roads would be enough for you already? Would you say that you mostly want to avoid main roads? So mostly Interstate, Motorways, and U.S. highways? This should already be pretty close to using extra curvy and the two avoidances mentioned by @linux-user. Can you see a big difference when using extra curvy?

One important thing that should be noted is that in big parts of the US, especially on backroads, no maxspeed is tagged in OSM.

Understood. But in the USA, all states have a maximum speed limit that applies in the absence of a posted speed limit. In other words, in the state of Maine (for example), the speed limit is 40mph, UNLESS otherwise posted (higher or lower). If OSM tags no speed limit, then we may assume that the state-wide limit applies by default. Yes, it’s an assumption, and it may be faulty, but to accept it dramatically simplifies the coding challenge – a couple of lines of decisive code (assuming you have a list of default speed limits for all 50 states).

The issue is, that the tagging in the US is really bad. There has been an automatic import of roads, so the roads are there, but they don’t really contain additional information. When looking at Maine, I zoomed around Waterville, have a look here. The blue lines show roads that have a specified speed limit. 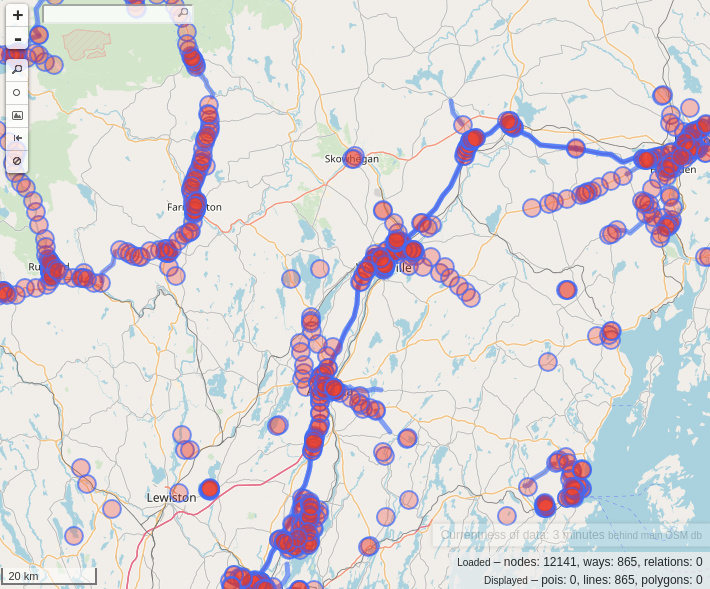 If we assume all other roads are 40 mph, there would be very limited traveling with the scooter

. The data in central Europe is a lot better. But on the bright side, the data in the US is getting increasingly better with more and more contributors that help to improve the data.

If we assume all other roads are 40 mph, there would be very limited traveling with the scooter

40mph would be fine as a limit. But I take your point about the paucity of maxspeed tagging (at least in your Maine sample). However, we could argue that making an assumption about the default, and subsequently discovering that limits on particular roads differ, might incentivize some riders to contribute accurate tags.

I agree with you

and I think this is a handy feature to have (you could also think about the other way around, avoiding very slow roads). However, the implementation and maintenance of this feature takes quite some effort and time, so let’s see how many people need this feature first