I am coming back to my very first complaint, trying to route form Gijon(Spain) to Puerto de Vega. There is a Highway (A8) going almost in parallel to the old national Road N 632 and N632a. These are beautiful motorbike roads, however it is almost impossible to convince Kurviger to route over these. I don’t really understand the issue, but my idea is as following. Today you can (de-)select several road types (in German) Schnellstraße, Hauptstraße etc. None of deselecting one or more of these, brings Kurviger to route over N632. Apparently, there are more road categories behind, and I am asking myself, it if would be better, if one could chose for routing most of these categories, e.g. by ticking a checkbox (include for routing). Since I do not really understand the issue, I am of course open for other ideas, rather than having to set 2 dozend of intermediate waypoint just to stay on N632.

Hi Ive, can you provide a link to your route please? Maybe you have “avoid offroad” on or something and the route is tagged as offroad in OpenStreetMap? Or maybe there are some gates that are tagged improperly without access rights for bikes?

There is no offroad issue, it is just the old national road. Take a look at Google Street view


Hi some screen shots
Just try to select a starting point near west of Gijon on N632 and a target close to Lluarca and try getting it to route via N632.

Hereafter is a screen shot from TomTom. It considers at least the possibility to route via N632 (dark blue)

Please provide route links from each website for easy and quick testing.
Cannot expect anyone to invest time and create routes from the images.

Investigating further, there’s something fishy w/ routing. Look at the following screen shots in France.
This is over the Highway 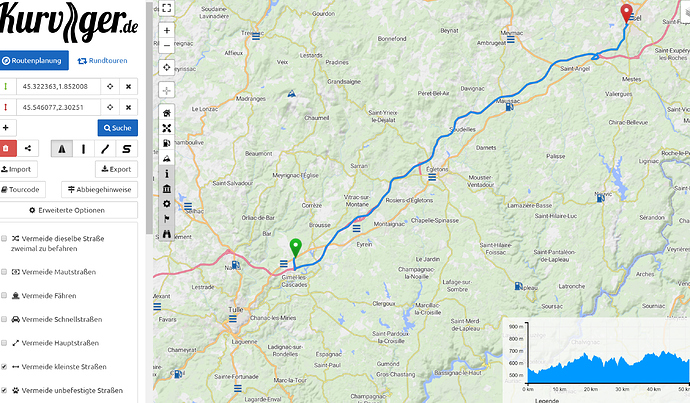 image.jpg3012×1762 1.62 MB
Now look at deselected “Schnellstraße”
It goes over the parallel national road, but it takes a very unreasonable approach 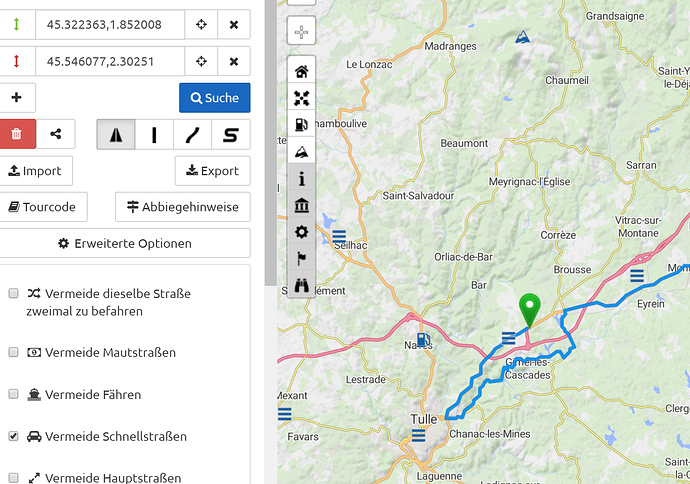 My quick’n dirty idea is, if you deselect highways, then the routing option “fastest direct” (Highway Symbol) becomes unrecognized by the routing algo, at least for the 1st leg. 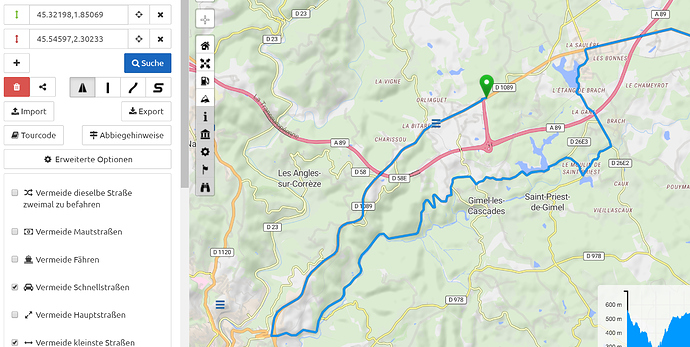 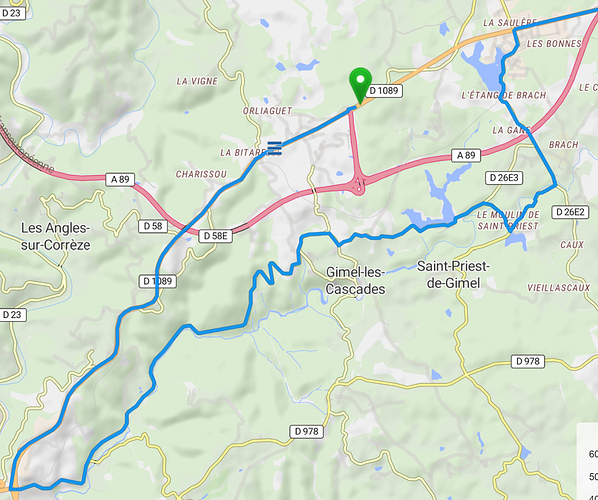 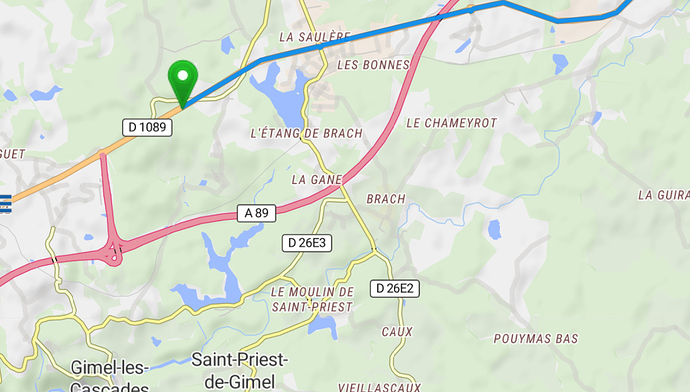 Hi Ive,
please follow the questions of Patrick an devemux, I think they mean: 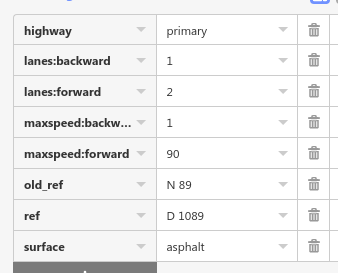 It seems the router completely ignores that part of the road (in both directions) because of this. Notice how the blue line never appears on that part.

EDIT: I’ve added a note to OSM, hopefully some local will fix this.

It seems the router completely ignores that part of the road (in both directions) because of this. Notice how the blue line never appears on that part.

Yes, that is most probably the issue, thanks for finding this!

If you look at the surrounding ways, there is maxspeed:backward=80. Maybe it would make sense to “hot fix” this like that and keep the note open? 80 is probably more correct than 1.

Hi,
leaves me w/ a few questions:
Max speed in France is 80Km/h ? Wasn’t there an issue w/ setting Maxspeed for all roads (Non Highway) to 80Km/h as a general override?
What means back or forward? everything is relative? We talk about roads, not lanes??
I added the route in France to excluide that there was a particular issue w/ the route in Spain. Your contribution suggests, that there is a peculiarity on the road in France. Hence I choose another road where the national road goes in parallel to a highway, and I end up with a similar problem.
Take a look at this route.
https://kurv.gr/icNCq
Over Highway is OK, when Highway is switched off, the routing takes you back! a few hundred meters and then asks for a U-turn. 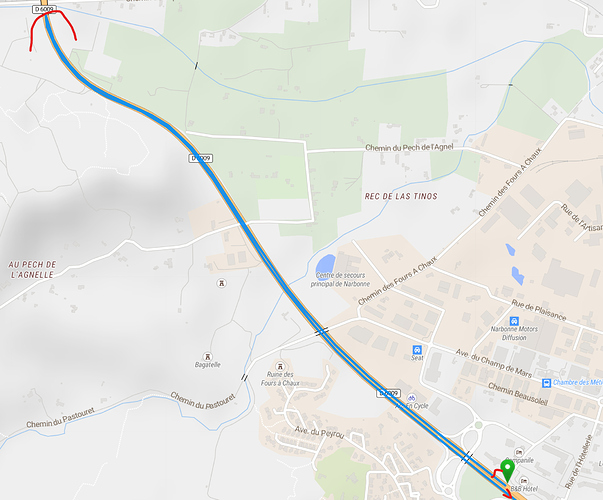 image.jpg2194×1818 640 KB
It appears to me that the positioning of the starting point is not independent from directions. Apparently it is set onto a lane, not a road. I checked this section on Google Maps and found out that this road has a separator in the middle, hence you cannot just turn around. Apparently the starting point is now on the wrong side of the road and therefor routes the initial leg into the wrong direction. However this should not happen and the starting mark should be “direction less” , enabling routing into the direction of the target point right away.
Edited: I just zoomed to max and moved the starting point on the “right” lane, and routing is OK, which confirms my reasoning above.
Same applies for the other French road, it is a multi lane road with a contiguous white line in the middle, - no turns allowed.
RGDS
hk
lve0200 August 23, 2019, 8:00am #12

Hi,
sorry I didn’t know this. I thought screen shots would be required. Screen shots show, what is on my screen, while I cannot control what shared links produce on other PCs.

Here is now the link for the problem in Spain.


https://kurv.gr/Aq0G2
The problem is to use whatever configuration parameter, to convince Kurviger to route via the national road N632 and not over the Highway.
Rgds
hk
Patrick August 23, 2019, 8:46am #13

I cannot control what shared links produce on other PCs

That’s the beauty of Kurviger links, they contain all the information needed to make a route with exactly the same parameters that you set. So we get by definition the same output as you from the algorithm. Links are really the easiest way for debugging. Screenshots on top are of course super nice and very helpful as well

What means back or forward? everything is relative? We talk about roads, not lanes??

However this should not happen and the starting mark should be “direction less” , enabling routing into the direction of the target point right away.

Hi Ive, that’s not really correct. This entirely depends on the underlying map data, and in our case OSM treats most bigger highways as separate roads per direction. You can see this on the map itself most times as well, the “directional roads” are often separated by a few pixels. Thus we naviation users have to be a bit careful where we place our markers. To alleviate this, I would always recommend starting and ending somewhere else, on a smaller road

Do you have any other questions about this? In your last post it seems you’re good now, right? Don hesitate to ask again if anything’s unclear

Max speed in France is 80Km/h ? Wasn’t there an issue w/ setting Maxspeed for all roads (Non Highway) to 80Km/h as a general override?

Kurviger does not override things like that, it (again) follows the OSM data. If you find an error in the OSM data please don’t hesitate to correct it!

Yeah I know, I remembered that discussion, that’s what I meant to say, we can just listen to OSM, not more. If all roads in OSM have been correted -> nice. If not -> bad luck for us

Max speed in France is 80Km/h ? Wasn’t there an issue w/ setting Maxspeed for all roads (Non Highway) to 80Km/h as a general override?

The issue presented here is a data issue. Changing the max speed for France is definitely a challenge for OSM, if maxspeeds have been tagged that are now changed from 90 to 80, but not yet reflected in the data.

What means back or forward?

Every way in OSM has a direction. You can set many attributes in forward direction and in backward direction. For example with maxspeed it can happen that a road leading into town is already at 50km/h but the same road in other direction, leaving the town has a higher speed limit, like 80km/h. The forward and backward allows to set this. In your example, someone set the maxspeed to 1km/h. Therefore, Kurviger won’t use this road and take a detour.

In your example, someone set the maxspeed to 1km/h. Therefore, Kurviger won’t use this road and take a detour.

What I wonder: Why did GraphHopper ignore the whole road (in both directions) when just one direction is set to 1 km/h?

Why did GraphHopper ignore the whole road (in both directions) when just one direction is set to 1 km/h?

Internally a really low speed is often seen as a road being inaccessible. That could be the reason.

Hi, All,
OK, I learnt a few things from this discussion: