You’re absolutely right. In fact I’m a little bit ashamed about that

Navigation: switch between distance / time to destination or next waypoint (tap distance) (Pro)

There’s a (really small!) issue about that new function: if tapping on the element while missing a GPS position, you get some “fancy” output (0x7ffffffe) on the display. 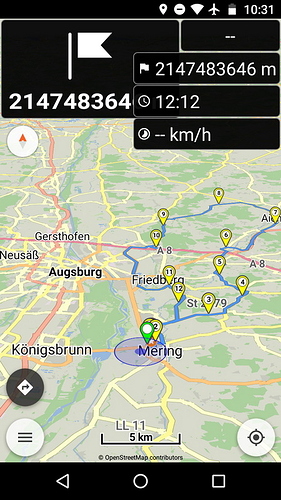 Thanks for the report Mario!

You seem having a GPS position on map, probably some miscalculation happens which needs to be checked.

There’s a (really small!) issue about that new function

Mario can you post the .kurviger route file and the user location where this happens?
(menu Share | Location and Copy to clipboard)

Is it reproducible?
You can send a private message if you like.

Mario can you post the .kurviger route file and the user location where this happens?

I’ll try to reproduce it and will send the file and coordinates then.

thanks - there are many interesting changes, I appreciate them!

Further more I checked the GPX import with special character in track name from alpenrouten.de (as already mentioned in an other thread) - works fine, thanks.

Especially the change of the display mode of route and location marker is very nice - I decreased the route width to 50%.

I even would like to decrease it to 20% or 10%, reason: After planning a route I usually check categories of roads used by the route - due to the thick route line I have to zoom in quite far until I can see the category of the road “below” the route - this has already been improved by setting the width to 50%, but I still have to zoom in. Setting the width to 20% or even 10% might be a further improvement.

Example (Screenshots from a 10" tablet):
https://kurv.gr/qL5vU

If you goto to SW of intermediate destination #6: 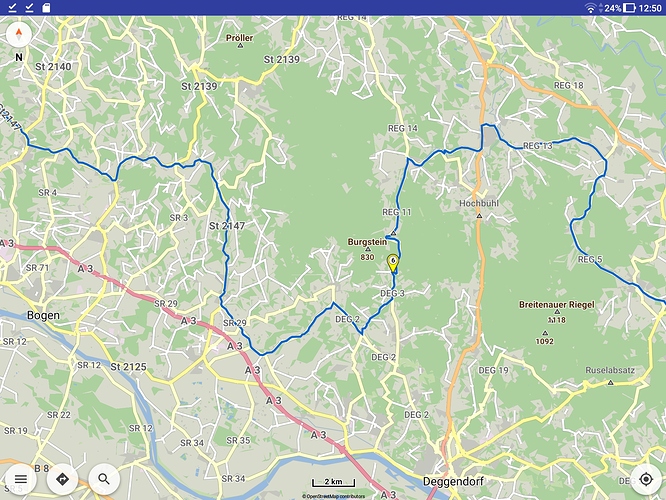 at a scale of 1cm=2km you have no idea of the category of the shortcut from DEG 3 to DEG 2.

Zoming in to 1cm=100m you can see, that the category is “white road” instead of “pale yellow road” (I don’t know the category names): 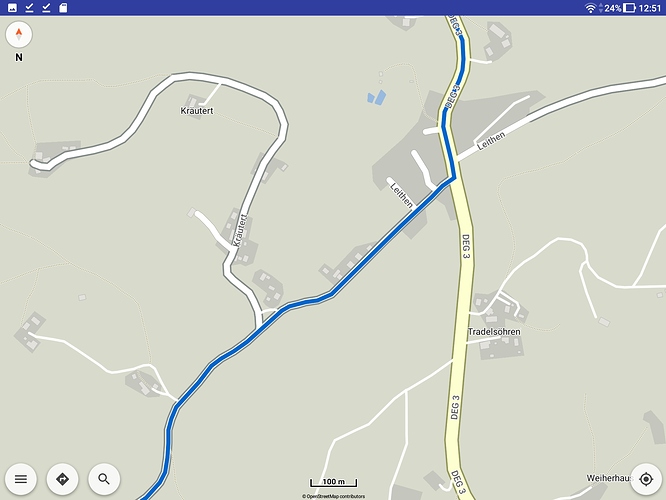 Therefore I propose to enhance the ajustable width down to 10% - there is no disadvantage, nobody has to use that thin route line …

Therefore I propose to enhance the ajustable width down to 10% - there is no disadvantage, nobody has to use that thin route line

We can provide such extended route scale in next version.

There’s a (really small!) issue about that new function: if tapping on the element while missing a GPS position, you get some “fancy” output (0x7ffffffe) on the display.

Probably mean if tap on the element while away from route?
Then the panels shouldn’t display any info, fixed that for next version.

Probably mean if tap on the element while away from route?

Yes, I think that was the scenario. Couldn’t reproduce it yet.

Yes, I think that was the scenario. Couldn’t reproduce it yet.

Thanks for the confirmation, I can isolate that workflow solving the issue.

Just tested the newest release during my stay in Alto Adige and I can say it works. But I didn’t have to use some of the new features, but I am sure they will work!

Again I just experienced the issue that while on the top of Gavia I added a new waypoint as I had to shorten the route. As I didn’t realize I didn’t have mobile accessnin this moment, my route disappeared while adding the waypoint. As experienced kurviger user I of course had the original route stored as .kurviger file. So after importing that, the route was back.

This is really annoying and I wonder why adding a waypoint and recalculating a route is still done while there is no mobile access? Can’t kurviger avoid this?

Especially with the new feature to start manually start rerouting while off route by clicking the warning symbol, can lead to some frustrated user when in this moment the mobile access is not available!

How does other user think about that? Did no one experience such situation?

When navigation is active the rerouting does not remove the existing route until a new route is calculated.

What you describe is routing in regular map view mode without navigation?
I can add an internet check also there.

Well as a user I’d say I was in navigation mode. Maybe I changed the view, but not sure, I just remember I added a new waypoint to my active route while no mobile access was available.

Navigation always protects the route with multiple checks.
Unless a new one is calculated, active route is never lost.

And force rerouting keeps route until a new one appears!

In non-navigation we can improve similarly the route calculation when there is no internet, so that current route remains on screen.

Gents, many thanks for your efforts! I’m looking forward to use the new functions.

In non-navigation we can improve similarly the route calculation when there is no internet, so that current route remains on screen.

Yes, this is necessary. Great features in new version. Implementing user proposals in this flexible way is absolutely thrilling.

I found a way how you can destroy an existing route;
Follow your route. In the middle of the tour you change in routing option from Kurvige Route to schnellste Route without internet access. And your route is gone.

Do you mean while inside navigation? Already is fixed for next version!

Also outside navigation will have a new route calculation safer process.