But still the last one to three (depending) waypoints which I had already passed before the pause were in the route again and I had to manually skip them.

Where was the last waypoint, on the stop?
Then you might not have actually passed it.

(anyway we just discuss possibilities, since it’s impossible to know what happened)

Hi Uli
Got it, thanks!

Where was the last waypoint, on the stop?
Then you might not have actually passed it.

(anyway we just discuss possibilities, since it’s impossible to know what happened)

O.k. let’s become a bit more concrete: https://kurv.gr/7Sk7U was one of the routes.
We did a Pause in Hellenthal. In the Village, I have left the route for about 500m (to find some coffee). Pressed “Pause” (while not being on the route any more). After “unpause” (and coffee and some other usage of the phone, sent some messages) ) I would have been routed again to the already passed Waypoint #6 (way behind). I have manually deleted it and everything got fine again.

Tested with a little 50km shopping tour. Started somewhere outside of the route, was asked to drive to start or next waypoint… have used next waypoint, worked very well… have forced driving outside of the route where normally the next waypoint was skipped when using route option next waypoint… app perfectly guided back stolidly to the last unvisited waypoint of the strict navigation route unless manually skipping it, then guides to the next unvisited waypoint. What I have also recognized is that the app now earler and more intuitively calculates the alternative route as I had also asked for since a while. Till now perfect.

Hi,
thanks for the update.
Just a small remark to the waypoints menu: If I press the “Change Shaping / Via” icon without selecting a waypoint, all waypoints (besides start and destination) will be changed.
It would be helpful, if the confirmation popup would give a hint for the direction, e.g. “Change all to ViaPoints” / “Change all to Shapingpoints”.
Currently I get the same popup, please see screenshots below.
It is not so important (low priority), but might bee a low hanging fruit.
Question: What is the rule for the direction? Assumption: If all = Shaping -> direction Via, otherwise direction Shaping. Right?
Thanks and regards
Markus 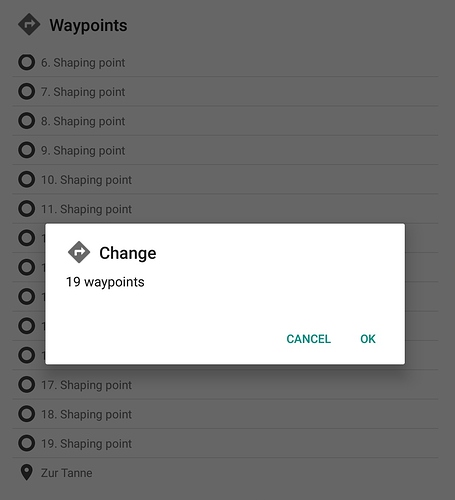 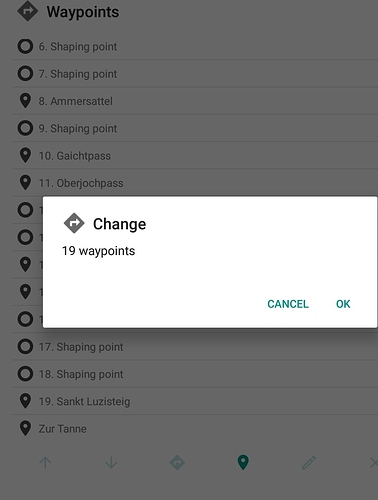 It’s a non destructive switch, must press OK in waypoints dialog to make it permanent.

It’s a switch to convert all waypoints to shaping points or via points.

My proposal was just to give a hint for the direction (-> Shaping or -> Via ) in the alert box where the change hast to be confirmed.

It’s a non destructive switch, must press OK in waypoints dialog to make it permanent.

Indeed the functionality itself is fail safe. No need to change that.
But the proposal from @rumbrummer would improve users perception. 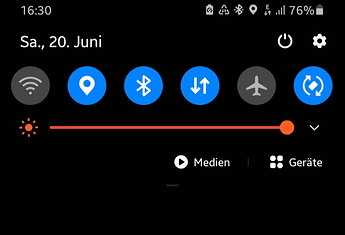 The app crashed several times and I have send a feedback from the device. Do you get this automatically or where is it sent? 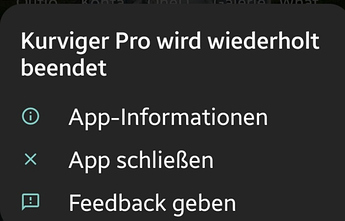 My impression is that the app doesn’t switch to brouter calculation even if it takes much too long to calculate a valid result, then finally the app quits in a calculation subroutine.

would it be a solution to force offline calculation when an online calculation cannot be finished in a certain time (15 seconds or so) even if there is internet connection on the device? Or is it possible to read the actual internet band width on the device and switch based on a low bandwidth? Don’t know how a smooth solution would be, but I guess all is better than a crash.

When internet is available with enough band width all is working fine.

Google Play console collects reports (after submit).
Ι don’t see anything for Kurviger 1.13.11 (Beta) yet.
So what really happened can only be theories now.

Regarding combined routing services, we had discussed all that:
Internet is checked on route request, if it does not work an offline routing happens.
That’s the simplest process and will remain so. Or select offline routing in settings.

Or select offline routing in settings.

Thanks. I think it was with 1.13.10. Before last tour yesterday I had updated to 1.13.11 and had no crash on the route (also with automatic calculation active). But it is a good hint, when such things happen, I can change the route option in settings and change it back later again.

You can make the UI text on screen smaller or larger.

It would be helpful, if the confirmation popup would give a hint for the direction

I noticed that the speed panel is not refreshing when following. It invariably shows one value that corresponds to the speed when activating the following function (i.e. usually 0 km/h).
During navigation is OK.

Edit: Sorry, I did not notice that @Nico_Krause has already pointed out this problem…

I noticed that the speed panel is not refreshing when following .

Thanks for the report, it will work again in next version.