Sometimes the main road in a village or a town, corresponding to the Kurviger planned route, turns sharply, but a secondary road leads straight on with no or skimpy signage. The app remains silent, probably assuming that the rider will just keep going along the main road, while in reality the situation may be quite confusing and one would rather keep going straight.
I could not find any of the actual places it happened to me, but found one that should explain what I mean. Here on the photo there are (barely visible) signs on the road, but there are many places where this is not the case.
It would be useful if the app spotted the places where the main road turns sharply, when there is an option of going straight ahead, and recommended to “Continue” or turn.

How it looks in the app: 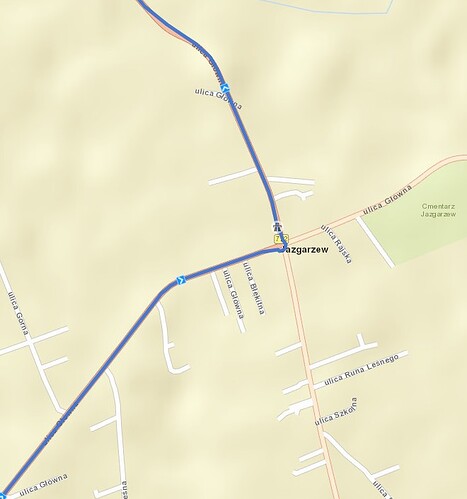 Routing services (Kurviger, BRouter, …) generate the turn instructions,
as they are the only ones with access to the road network.

Applications / navigators take only the calculated routes and use them.

So it is a matter for the routing service to improve the turn instructions.
You could post a route example so the report can be better checked.

Unfortunately I did not save that route and don’t remember the exact spot. It happened to me a few times in the situations similar to the one I described. I assume there is an algorithm that says when the navigation should provide instructions and when it is not necessary. On the map the main road has a different colour and rank, so in the eyes of the algorithm it clearly differs from the side roads. I believe it is possible to update the code with something like: if the road turns at an angle sharper than X and there is also a straight road ahead then inform the rider.

The good news is that we can actually fix these cases. If you remember the location next time just let us know, or alternatively you can go to OSM yourself and improve the situation. Things that affect the turn instruction are

The critical point in the route: Jazgarzew - Gołków | Kurviger
The shown StreetView picture is from 2013 - meanwhile all maps (except the used Esri Streets) show a traffic circle, which probably exists based on Esri Satellite: 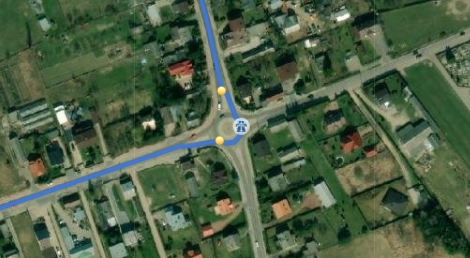 Like I said, that was just an example illustrating the problem I spotted in other places I can’t pinpoint right now. The idea to report this issue came to me some hours after I finished yet another ride where I confused the main road with the planned route, and I had not stopped to take a note where exactly that was. Will try to do it next time.

obviously very cool of you still to report it, thanks.
it often happens that the devs check one example and then they suddenly find a bigger, overarching problem. So yeah, keep the examples coming if you have any