I imported a gpx route. Now there is a red line between the waypoints.
What`s the purpase? How can I get rid of it? 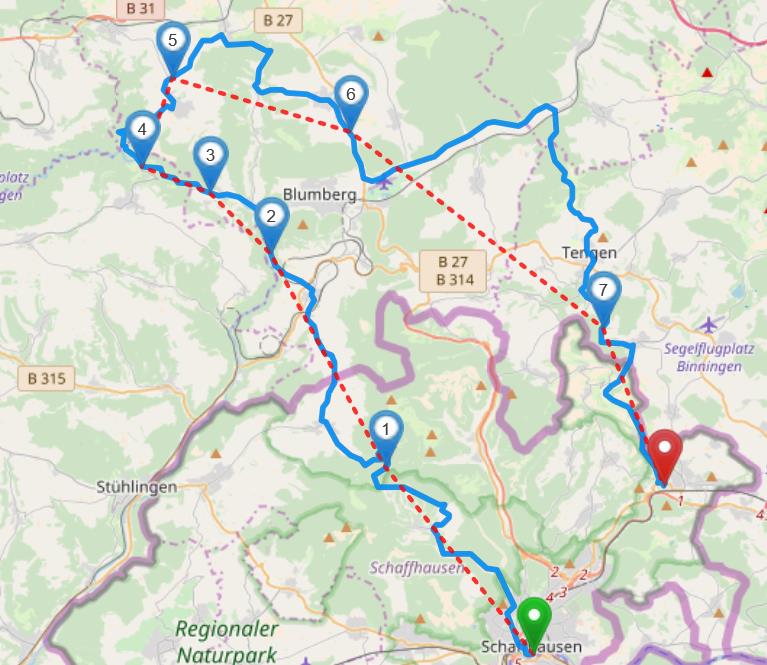 The red line is IMO the “overlay” of the original .gpx.
If you don’t want it, you shouldn’t check “show gpx as overlay” in the import dialog.

So easy if one knows. Thanks a lot.

Hmmm - perhaps just a good opportunity to ask this question, I had for a long time, but never thought it to be important enough to ask …

What is the sense / use of this “overlay lines”

Exactly the question, I also asked myself.

I’d really prefer to get rid of that direct connection lines when importing a GPX file with “overlay / route” option.

Do you mean the red track line or the green route line of GPX import?

Track line is useful to adjust the routing on top for match it more precisely.
Can see also the documentation for that.

Or mean something different?

In the example above (see pic) it’s the red dashed line, which @Gardo was talking about.

I know about “GPS tracking” and the Kurviger documentation as well - but in the screenshot of @Gardo the red dashed lines look like air lines (different to the picture in the documentation you linked to), not really tracked routes.

So for me it’s still unclear what they are good for.

The example shows a GPX route with waypoints connected via a line.
Website has both track + route lines in same red color (@boldtrn ?).

Probably show GPX route waypoints instead as markers would be more useful?

. First I think we have to talk about the difference of waypoints to route points (speaking GPX terms).

Waypoints have no order. Routepoints have an order, that’s why they are connected with a line, to show the order. This is nothing we decided, but seems to be a standard of sorts. For example also Basecamp does it that way.

Probably show GPX route waypoints instead as markers would be more useful?

This could be an option, yes. The question is, should we do this? What do other users think about this?

Another option cold be to always add route points as wp overlays (maybe even in a different color or shape than regular GPX waypoints) in addition to the route overlay.

So for me it’s still unclear what they are good for.

The help of route or track overlays both are to help during the import. For example if you import a route with 500 route points, Kurviger will remove many of these route points for the route calculation, but they are still shown as overlay, to help the user to manually add some route points to make the route appear as close as possible to the overlay.