On my planned route I see more tunnel symbols than route. I have not found anything to hide the tunnel symbols in the route guidance. Does anyone know if this is possible? Thank you and greetings___

Either close the “Topography diagram” under Settings completely or switch through to “Height” in the diagram at the bottom right.

In general, do you find the tunnel symbol annoying? If most people don’t find it useful, tunnels could be removed from the route information.

I find the tunnel information quite useful. It’s generally not very interesting to drive in tunnels, if you have other choices, i.e. when making vacation trips to Norway: There are a number of tunnels where there is the old road, which are much nicer to drive on than going through the tunnel. By getting the tunnel symbol, you can start looking for possible other roads.

Sometimes there are “tunnels” which represent just a bridge. If you can find out the length, suppressing all tunnels shorter than 100 m could help here.
One example: 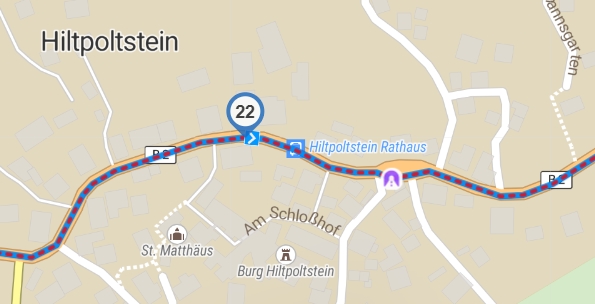 Sometimes there are “tunnels” which represent just a bridge. If you can find out the length, suppressing all tunnels shorter than 100 m could help here.

Right now, tunnels are shown when the tag tunnel=true is present in OSM.

To quote from the OSM Wiki:

You are right, that short tunnels are usually not an issue when riding, so we could limit this to longer tunnels.