Smartphone is not the ideal solution for use as a motorcycle display. The following points are not “hard” points, more general “problems”:

(As a mechanical engineer) I do like to tinker with arduino and all that stuff. So have I have some special display lying around and just thought to myself. What do I really need for navigation while riding.
A direction symbol (left, right, …)

So why not build a system (if interesting I will post my ideas) with excellent readable display (monochromatic) which are easy to position and the smarpthone communicates with them.
I would suggest that the smartphone sends special information to that unit like a “roadbook” of the navigation.
And with that information the navigation unit can maybe opperate “alone”.
I do have furhter technical details how to achieve this and I would like to build a prototype.

There are already some promising approaches existing (like Beeline).

But I prefer having a device (smartphone) capable to display a real map view. Only symbols won’t be enough to cover my personal needs (that’s also the reason why I never used only headphones for navigation).

Thanks for the question @Tim. I actually build something related with the Kurviger app for a uni project some time ago.

). Let us know a bit more about your idea and how you think this could/should work

Maybe it would be possible to support Android Wear by displaying a small map view or only simple symbols and basic navigation instructions. This way there would be a lot of devices which can be used (some of them even relatively cheap, if you lower your sight concerning quality).

@boldtrn
Thank you for the answer and I totally fine with no promise.
Tomorrow I’m going to the alps (with bike ^^) so I will get back to this topic in about 2-3 three weeks.
Looking forwad to it with more details

This is really awesome!
Thank you for the link. But I’m not sure if like the design approach.

Android Wear’s battery runtime is abysmal also there are only very few actually waterproof models available. That’s why I switched to a Garmin watch. 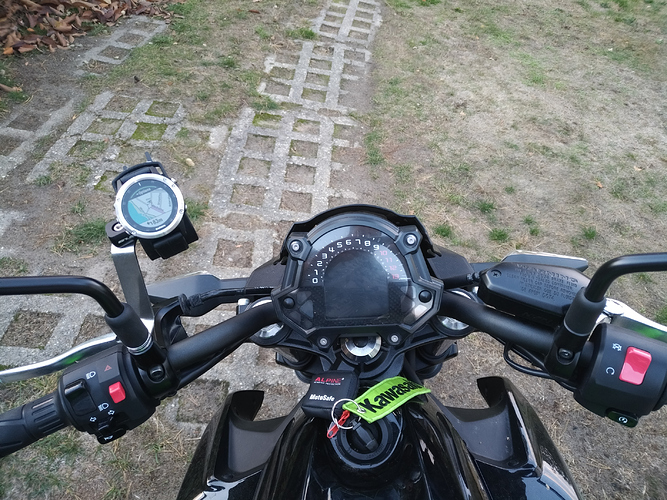 That’s why I switched to a Garmin watch.

That’s interesting, how does it work? Is it possible to load GPX tracks and navigate along the tracks or how is the navigation working?

It’s the newer Fenix 5 Plus that comes with integrated routing (like the “old” 5X). So it can calculate a route to some place by itself. However, you can’t enter an address, just POIs like city centres, businesses, petrol stations, etc - or your own, or by marking a spot on the map. (But there’s an app to transfer a location from the phone to the watch.)

Navigation can be set to route for motorcycles (prefer curvy roads), cars (normal routing) and a few others. You can also set it to avoid toll roads, ferries, highways and/or unpaved roads. Although I don’t know if that works with any (OSM-)map or only with Garmin’s maps. (TopoActive Europe is included.)

Since it’s a Garmin device, you can, of course, also send a GPX to the watch and follow that. There’s even an “intelligent” following mode where it tries to route you back onto the track instead of just telling “you’re off track”.

And there’s an app to show navigation instructions from Google Maps (running on your phone) on the watch.

I’ve mounted the watch on the original Garmin Forerunner/Fenix bicycle mount that I put on a handlebar extension.

There’s even an “intelligent” following mode where it tries to route you back onto the track instead of just telling “you’re off track”.

Actually we are already planning it for a future version, see here:

Although I don’t think that such a reduced solution would be helpful in every situation, I like it’s visualization: Beeline Moto Would it be possible to add a similar orientation arrow, indicating the direction of the next turn and/or waypoint, in the Kurviger app? Could be convenient, escpecially while being off the route (with deactivated automatic rerouting). Have fun and ride safe! Mario

Thanks for the explanation, that sounds like a great device

Sounds pretty much like a TomTom Vio to me

Hi there,
my name is Andi and I´m new here.
I´m also looking for solution to use a second display mounted on the handlebars. I found a pretty example:
https://www.vaumax.com/eine-smartwatch-am-motorrad-als-navi/.
Perhaps it is possible to show route-informations produced with kurviger on a smartwatch like in the example using “ionwatch”? For me this figure is nearby perfect.

That actually does look pretty cool! Kurviger does not have WearOS support at the moment?

Kurviger does not have WearOS support at the moment?

Not at the moment, managing our resources carefully and filling the app with interesting features!