Don't ask for previous route, if opened by tap on file

If I tap on .kurviger file in Total Commander, Kurviger opens and selects the tapped file in import dialog

Nevertheless Kurviger asks if I want to load the previous route (of course not - I tapped the file to load that file): 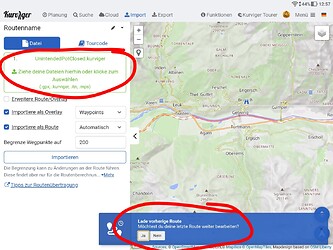 Proposal: Do not show that dialog in this case.

Thanks for the proposal! I think we need to investigate how we can improve the load previous route popup.

of course not - I tapped the file to load that file

sometime you might want to load the previous route and

Wouldn’t it be better to have a history of previous routes?

In that case I would open Kurviger app 1st anyway, because before I extend a route, I check it.
And there is also the checkbox “expand route/overlay” - there might be some redundancy.
But I am not sure if I am aware of all cases…

Wouldn’t it be better to have a history of previous routes?

You already have a history during the planning, with the back button. “Good states” that you want to save for later, should probably be saved with a name? That said, the previous route behaviour as it is right now, is not ideal, so I am happy to discuss options, maybe in a new thread?

In that case I would open Kurviger app 1st anyway, because before I extend a route, I check it.

Yes this is true as well.

And there is also the checkbox “expand route/overlay” - there might be some redundancy.

You need that checkbox if you want to extend instead of overwrite, only the planned route will be extended. If you don’t load the previous route first, you can’t extend it.

Yes - that is what I meant: If I have no route / no overlay (either because I deleted them or because I have chosen “no” when asked if previous route shall be used), it can not be extended - so the checkbox is redundant.

3 posts were split to a new topic: Back Button Behaviour and History handling

There is a cloud for saving routes.
Why is there these Checkbox.
Never missed or needed. One more click for nothing.
Thats only my mind.

This is about giving you a choice if you want to continue editing your last route or start planning a new route.

Sometimes you might play around with a route, it’s not really finished, so you don’t save it explicitly, but when returning to Kurviger, you still might want to continue editing it.

In general keeping last planned route is very helpful, especially if last changes are not saved.
Real use case (happend many times): Start route planning in hotel room in the evening, leave tablet switched on in hotel room during dinner, tablet shuts down due to empty battery.
If I have to choose between needing an additional tap after start of app or loosing the feature “keep last route in mind” I definitely choose the additional tap.
The goal of my suggestion was to improve comfort (-> low priority) in a special case (app started due to tap on Kurviger file or GPX file) - definitely not to remove that precious feature in general.
I really do not like the Android built in method to browse through the directory tree, therefore when planning routes for vacation (I use the app on a tablet for that) I always use Total Commander and tap on files which I want to open in kurviger, this concerns route files, overlay files and also POI files.