Creating a route from an overlay

Moin!
I have tried to import the overlay from the TET (Trans Euro Trail) and to create a route by setting waypoints on te overlay line. Kurviger is not doing what I want. The programm is creating it`s own route.
How ca I force kurviger to create a route by using the roads marked by the overlay. On the attached picture you se my problem between the wapoints 52 and 53.
I would be happy to get a workaround die solve my problem
Kind regards
Hermann 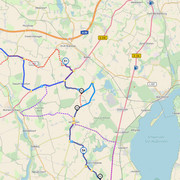 Unfortunately it’s not possible to force a route following the overlay.

You can have a look here: https://docs.kurviger.de/route_transfer/transfer_track_to_kurviger

Some TET routes work pretty well on Kurviger, but we currently don’t have a dedicated offroad mode. So some roads might not get accepted for the routing.