Hi,
at very low speed, or standing still, the GPS direction/speed vector is never 0, as well as there is no orientation. The vector jumps randomly at any direction(heading) and low speed, which is a result of athmospheric conditions of GPS signal reception. Switching ON the app and standing still never shows you in what direction you are heading. This may also be the reason for problems with round trips, because the vector may direct to departure and a second later to arrival of the route. Some GPSses “nail” the vector to 0/North, but like that you still don’t know your heading. It might be useful, that you combine at low speed the output of both, GPS and compass (if the device has one) to provide heading also when standing still. That would have the advantage that your map is always properly orientated and you can directly see, if you and your bike are evenso properly oriented towards your route!
rgds
hk

For implementation, I would compare if at speeds lower than 1 Km/h the compass heading is within a range of the last GPS direction. If there is no last GPS speed vector >1 Km/h or a significant deviation between both, I would switch to compass direction until the GPS vector becomes significant again.
Could be in the orientation beta??

Hi, thanks for the question!

Which app operation do you mean, Navigation or Follow mode?

Navigation employs the GPS readings and specifically the bearing is used when speed is >10km/h to avoid such fluctuations.

Compass has its 2D and 3D modes (via tap), though such sensors are usually not reliable and there are interferences from near electronics.

Hi,
its about navigation. Of corse the compass has some bad behavior, therefore I propose using it only, when standing still as a back up, when the GPS vector becomes unreliable, or no previous GPS information is available. I believe a rough indication of heading is better than No Direction! If I start today, I must switch to follow compass 2/3D to understand my actual heading and then manually switch to GPS.
Could you elaborate a little bit, what Orientation support is doing? I can t find any explanation (in technical detail), what to expect from it. Thanks.
I am not talking about an old Navigon feature called “tunnel navigation” where they used the compass, the old GPS speed value and the accelerometer in the mobile to navigate in Tunnels, when no GPS reception is possible.
To make myself clear:
I load/create a route,
I want to start in navigation, but I don’t know my heading, hence I don t know if my orientation is right,
Ihave not moved yet- no old GPS heading is available, hence the GPS vector is unreliable and suppressed. Means, I have to start driving and see if I am going in the right direction, or make a U turn, if not. In these cases, at the beginning of a drive, switching to compass untill the GPS vector becomes reliable would help.
hk

Could you elaborate a little bit, what Orientation support is doing? I can t find any explanation (in technical detail), what to expect from it.

It uses the user’s available orientation in navigation algorithms to improve the position snap to route and navigation behaviour.

What is “users available orientation”??

What is “users available orientation”??

User’s orientation if is available from GPS, i.e. location bearing.

I am not talking about an old Navigon feature called “tunnel navigation” where they used the compass, the old GPS speed value and the accelerometer in the mobile to navigate in Tunnels, when no GPS reception is possible.

With Kurviger can use also the Kalman filter option in Map settings to help in such cases where GPS is unavailable.

In these cases, at the beginning of a drive, switching to compass untill the GPS vector becomes reliable would help.

Thanks for the extra info, now I understand better the proposed work flow!
That indeed could improve the navigation experience at start.

just a little thing…
I appreciated vy much in other navigators during navigationr, to see a real arrow pointing into my heading, rather than the current symbol

Kurviger in navigation shows a direction arrow towards user heading.

Or mean something different, like that discussion in old forum? 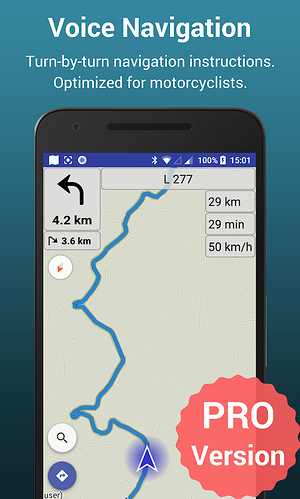 Hhm, yep, sorry,
must be some confusion in my mind!
Forget it!
You guys are doing an amazing job!!!
I am 1 of the early adopters of mobile navigation, once Navigon came up with it, running on an HTC Polaris under WinCe, probably already in the last millenium. I fooled around w/ almost all available apps in the market, because I needed it for biz and for leisure bike rides.
Your app is now 4me the best of the best! Don’t make the IMHO mistake of others, overloading the app w/ all sort of gimmicks, which makes it at the end unusable!
hk

Thanks very much for the kind words!

Don’t make the IMHO mistake of others, overloading the app w/ all sort of gimmicks, which makes it at the end unusable!

Many users have asked us already exactly that, to not overload the app!
We certainly try to offer several options so that all of you can be satisfied, while at the same time keep things simple for a nice user experience.

Hi,
has this compass thing gone into 1.19, or will it come, eventually?

New features can be seen in Changelog and more detailed in forum announcement, everything else is currently on workbench.