Currently you may try to import the charging stations as a gpx overlay into Kurviger.

New Kurviger user here, but not new to GPX and creating tracks. I want to be able to add my own custom POI/waypoints and have them become part of the exported GPX file. I’m talking about points of interest in an area of my track that I want to have noted on the map while I’m navigating. Things like “Waterfall7”, “CreekCrossing2”, “Cliff Overlook”, “MissileSilo”. These may be actually on my track, but more often they are not–just interesting things in the area. Although I want to call these “POI”…

Kurviger uses OpenStreetMap (OSM) as its map source.
As far as I can see there are still very few charging stations entered into OSM.

goingelectric.de seems to maintain their own database although they use OSM as a map source. That’s a pitty, because IMHO the information would be more useful in a open map than in a proprietary database.

Yes, goingelectric use there own database. But you can export the charging stations as POI’s. But kurviger.de can not Import them. If you could import POI that would be the solution.

Ok, I experimented a little bit with goingelectric.de.
I exported all charging stations of Germany into a gpx file. 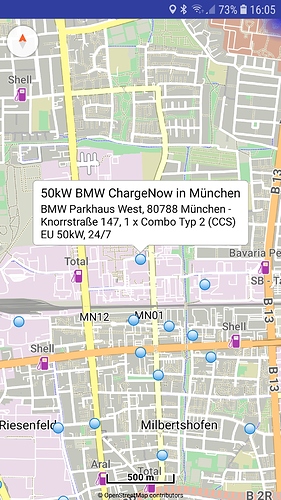 If you find a clever way to reduce the gpx-file or split it, so you can import only the relevant area, this might be a workaround.

thank you for your test and the solution. Until now I don’t use the APP. Normaly I use the PC verion and Import the file to my Garmin Zumo. It is not confortable to create a tripp at an smart phone, I mean. I am looking for a PC version to create my trips.

I am looking for a PC version to create my trips.

Well, my workaround (I wouldn’t call it a solution) is working on the website as well. 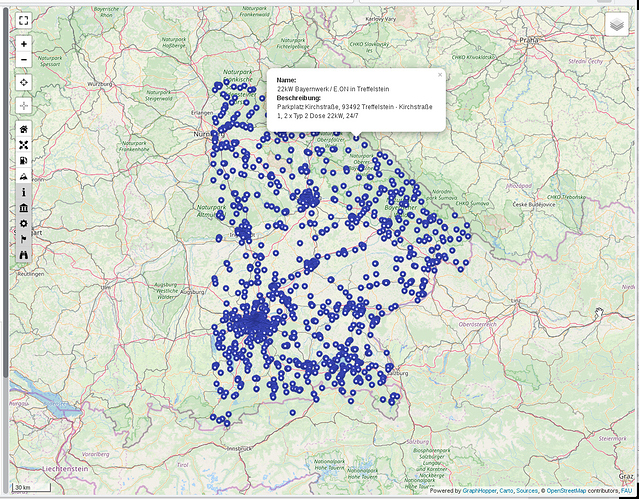 The website is even capable to load whole germany from goingelectric, but slows down considerable. My reduced example from the screenshot above, is working without noticeable performance limitations.

BTW:
To remove unwanted POIs from the GPX file I’ve used GpsPrune
There you can mark areas, and delete unwanted Waypoints.
Not extremely comfortable, but working.

The future will be electric, but it is still a long way to go.

Until now I don’t use the APP

you should give it a try.
Especially for spontaneus trips it is so easy to use. https://docs.kurviger.de/de/app
(long press on the map is the key to get started)

With Kurviger Pro you get additionally to the free version:

And no, I am not affiliated with the Kurviger team in any way.
I am just an enthusiastic user.

it costs less than a fill of gas

To get back to the main question - would you expect anything different from Kurviger from a routing perspective for electric motorcycles? I guess you would still prefer curves, and avoid motorways? If it’s just about the overlays, which works already, we should change the topic title and move the topic to a different category

To get back to the main question - would you expect anything different from Kurviger from a routing perspective for electric motorcycles? I guess you would still prefer curves, and avoid motorways? If it’s just about the overlays, which works already, we should change the topic title and move the topic to a different category

Overlays are not relay a solution. I is only a workaround. To plan a tour with an electric motorcycle optimally, it is important that charging stations are displayed directly. It would also be very good if you could set a radius of action to rightfully choose the next charging station.

Thanks for the clarification Dirk