When skipping a waypoint, the menu is automatically hidden or closed, the waypoint is deleted and recalculated. So far so perfect. But at the last waypoint the menu remains. With large font the button “Cancel” is not directly accessible. I.e. you have to move an overlay app away, then scroll down to make the cancel button visible and then hit it exactly. This is too distracting from driving. It would be better to end the menu automatically at the last waypoint and to display a message “Last waypoint” for 2-3 seconds and end it automatically. Alternatively or even additionally to display the message “last waypoint” please also bring it into the ear by voice message “last waypoint reached” or something like that.

Can you attach a screenshot so we can understand what you mean?

But at the last waypoint the menu remains.

The “Skip next waypoint” button is disabled when there is no next waypoint.
What can be done better is to hide the button. 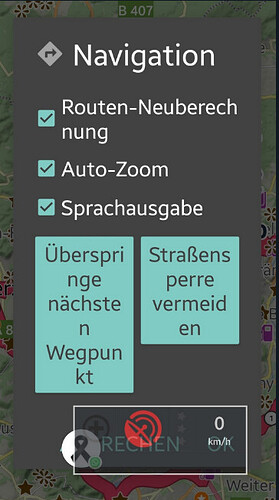 when skipping the last waypoint via the first button, the window does not disappear, but just stays on the top of the screen. Some overlapping apps make the “Abbrechen” Button not directly available, then I have to move away the overlaying apps first to reach the Cancel Button. I can’t reproduce now the other situation where the Cancel and OK button were not visible at all and I had to scroll down first to see it.

When now pressing “skip waypoint” button and no more waypoints except the destination is available to skip, then this window doesn’t disappear. IN this case it would be more sophisticated to display the message “no more waypoints” (also by voice message) and close the message and this “skipping window” and automatically proceed with navigation.

There is nothing we can do about third-party overlay apps that interfere with other apps.

In our app and as explained above:

(so it cannot work or hide the dialog)

Instead when there are no next waypoints, we can hide the “Skip next waypoint” button.
(as it is no longer usable)

Instead when there are no next waypoints, we can hide the “Skip next waypoint” button.
(as it is no longer usable)

Unfortunately this would also not help since the window also not disappears by itself then and I would still need to move the overlaying apps before reaching the cancel button. I know that you cannot influence overlaying apps. If the message or voice message “no more waypoints to skip” with auto-closing this window is too complex, then it would help to just close the window if pressing on the “skip next waypoint” button and do nothing when there is no more waypoint to skip. Still better then tapping several buttons more in order to close the “special skipping and rode block window”.

the window also not disappears by itself

Better change the position of the overlay.

Yes it should disappear when tapping on the “skip next waypoint” button. That’s what I described. If I’d wanted to use a road block, then I would use the other button.

or even tapping once outside of the window to close it

This is already available in all windows by Android.

Or simply press the Android “Back” button.

This is already available in all windows by Android.

Really? I can’t confirm. When I tap on the top of the screen outside the window nothing happens…

the problem with bigger font size is also that the window covers almost the complete screen which is good, but if I could tap on a free position within or outside of the window to close the window, this would help a lot more. And if the “skip waypoint” button disappears when there is no waypoint any more, as proposed, the free space would be bigger to be able to better use this for closing the window. Even tapping on the Headline “Navigation” which has no function could close the window. That would be much better for using with thick gloves.

You may use the “back” button of Android as well …

You may use the “back” button of Android as well …

The back button is impossible to hit with the nav mount and thick motorcycle gloves. Therefore, it does not work while driving.

This is not meant in a bad way, but I would really like to ask you to stop with more suggestions which I know would not work in my situation.

If that would work with the back button, I would not have made this new suggestion. I’m hardly stupid enough not to know what the Back button is for. But you just can’t hit it with the motorcycle gloves and the Ram-Mount holder. There is a lot in the way. For that reason, only what I described would work.

Other users and developers can not know what works in every user environment or device.

In any case extreme font sizes are expected to break all user interfaces.
That’s why Android display settings have only 2 larger (small) font sizes.

I will rewrite the navigation actions and options in separate native windows:

ok, sounds good. Would there also be an easy way to cancel the windows in such situations like described above?
Or what about an extra big button instead of text for cancelling the window or “go back button” in a size which can easily be hit also with thick motorcycle gloves? Maybe you know that I am also driving on the motorcycle in the winter and then the gloves are thick and warm (but also with conductive material for smartphone usage). It is just that all buttons would need to be bigger then (adaptable by zoom factor for example).

Android native windows are handled by the operating system and work the same.

like to ask you to stop with more suggestions

okay - I’m out …
One last comment: I can handle the “back” button with gloves while driving.