I could allow turn instructions only for via points which have names explicitly set externally.

It will be available in next version.

That solves also the case of import old routes with many unnamed via points.

[en] I love how the app is developing!
I have a few comments and ideas about the shaping points that I would like to discuss:

Thanks for the suggestions.

it would be helpful in some situations if the shaping points were numbered. Especially if you want to move a shaping point up or down in the waypoint list.

Shaping points are meant to be handled on the map.

Most engines (Google, HERE) don’t show them in waypoints list.
Kurviger is probably the only app instead of not show them at all.

Numbers are placeholders, i.e. auto generated names.
In a list their order is obvious and name is their identity.

The shapingpoints could be a little smaller.

That could make touch gestures on them very difficult.

Most engines (Google, HERE) don’t show them in waypoints list.
Kurviger is probably the only app instead of not show them at all.

That may be so. But Basecamp, for example, displays and numbers them.
This makes identification easier when you want to exchange points. But that’s really not a big problem, was just a thought that came to me when editing a route.

Basecamp, for example, displays and numbers them.

I could allow turn instructions only for via points which have names explicitly set externally.

Via point numbers can appear in waypoints list too, along with their names.

I could show also shaping point numbers. Then all waypoints (via + shaping) will have a common numbering (like happens in other apps), which seems more convenient(?).

Next version will have improved numbering in map symbols and waypoints list: 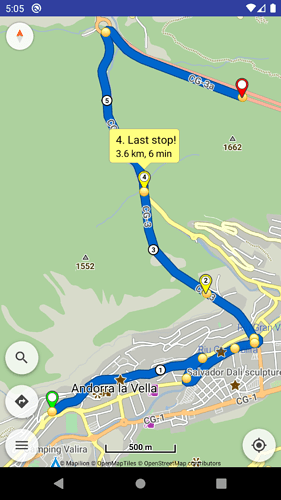 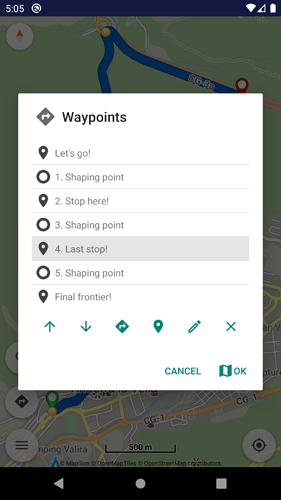 I did another tour today and again the coordinates were announced instead of waypoint 1. The basic file for my route was t13170858_gruener ring leipzig.gpx (495,3 KB) . I have uploaded these on kurviger.de and adapted the route https://kurv.gr/ZSLXv. Then I moved it to Google Drive via export and opened it with the Kurviger app. I thought I read that there are no more announcements if there are only coordinates or that the points are automatically named with waypoint 1 and following? Or did I misunderstand something?

In app can suppress waypoint instructions with one of several ways:

Regarding website’s export of waypoint names, see the related discussion:

The website is adding the content of the waypoint input as name. So if there are coordinates, coordinates are put in the file. If there are names from geocoding results for example, they are put in there. This behavior makes sense, because the website will show the same content in the input boxes that you had when planning the route. It’s a bit unfortunate that this seems incompatible with the app now. I can check if the website could not set the name property, if there are only coordinates s…

I’m not sure about deactivating it. Would you still announce wanted waypoints like break or lock?

I follow the discussion as far as my English or the Google translator allows it.

Removing the name only works in the app if I see it correctly? I will test it on the next tour.

To have waypoint instructions would need all together:

A post was split to a new topic: Rerouting question

That means, that " Einstellungen / Routenberechnung / Wegpunkte in Anweisungen" only affects waypoints with names?

" Einstellungen / Routenberechnung / Wegpunkte in Anweisungen" only affects waypoints with names?

At the start I implemented them differently (like most routers?):

But community asked only the named via points to alert for arrival.
Because there are some external imports that set unneeded names in via points causing problems.

Since there is the “Waypoints in instructions” option in settings, is that the best decision?
Certainly it’s more flexible.

It is most time only written “waypoint”. In beta 1.13.x we have different waypoints. We should differentiate between via points and shaping points. Via points (with optional announcement at navigation) and Shaping points (without announcement at navigation). It is fine that both types are listed and numbered in the waypoint list. The differentiation is to less considered at rerouting. Yes, I know that somewhere is mentioned at rerouting the shaping points between rerouting location and follo…

Thank you, that’s exactly why I plan to do in future:

And this is, why there should be changed anything! I tried to give the reason in my post you refer to. There i mentionened:

It should be possible to consider shaping points at rerouting!

Why? One point is: To use shaping points in the route with there marking which is not so dominant than the marking of waypoints.

In my post I had an example where I tried to describe this.

To come back to this thread (waypoint types):
We should try to use the advantages of the type shaping point!