Than why not using than that generated sign:-98 ?
This is not a Shaping Point nor a Via Point it is a Navigation Point.

This is not a Shaping Point nor a Via Point it is a Navigation Point.

Please check the waypoint types topic where all these have been discussed with the community:

Garmin uses the “shaping point” term and we can use it for the UI texts: Garmin BaseCamp: Shaping points are any position along a route that will not alert you when you arrive. Shaping points do not contain arrival time or distance between points information. Google Maps: stopover (optional) indicates whether this waypoint is a actual stop on the route (true) or instead only a preference to route through the indicated location (false). Stopovers are true by default. HERE Maps: A waypoint ca…

A Navigation point generated (by the router) with a very close nearby Shaping point (by the user) that it is. The Navigation point should be announced the Shaping Point sure not as agreed before.

Anyway the discussion keeps doing circles, perhaps the community can explain better all that.

We’re not going to fight for it, but you can just say you don’t want it. But a better example of what the website shows with the return symbol in the instruction list I don’t have to offer. You may indeed place hundreds of Shaping Points without notice, but only in this very specific case does the navigation point with its instruction exactly coincide with the Shaping Point. I think you are mistaking that.

You know, we are not going to put the website and the application against each other.
We compare politely.
But in this case, the website implementation is right.

Perhaps there is a misunderstanding:

I am not sure, if the discussion “announce via points / shaping points or not” and the option “Waypoints in instructions” concern just the announcement “here is a via point / shaping point” or if it includes “hide the 2nd instruction or not”:

You confuse right and expected / discussed / agreed with community.

Looks like another BRouter forum discussion about what is right and wrong in turn instructions.

Perhaps there is a misunderstanding

Like explained above the routing API works correctly.
Then the clients choose how to use the responses.

The app merges via’s successive instructions, because one instruction can be announced per location.
Now it announces via’s name. There was not a need to announce together the via’s turn instruction too.

Obviously we cannot fill the app with options, that will complicate further the development.
The “Settings | Routing | Waypoints in instructions” already complicates app maintenance.

You can also demonstrate it differently.

The problem mentioned in Brouter forum. (Perfectly reproducible)
Follow the navigation instructions exactly. Good luck !
There are tow services in the area that will help you further.

So it cannot have 2 instructions at the same point and the first with 0 distance and time.
(some merging / post-processing must happen)

I am open for changes, but without adding more options, instead simplify existing ones.

but without adding more options, instead simplify existing ones.

My proposal (perhaps to complex, as a discussion base):

I have to read this a few times first. Emux, If you indeed need to break existing functionality in order to accomplish this, I’ll withdraw my question for u-turn support. I really don’t want to get the whole forum on my head.

I did investigate the consequences of locating a Shaping Point very precisely on a track point with an expected Navigation instruction at exactly the same position.
I see an identical twin track point pair being created. One trkpt coupled with the Shaping Point the second trkpt with the Navigation instruction.
Regarding: Track point pair 22 & 23. (latitude: 48.29193 longitude: 11.97671)
Navigation works normally.
DeadEnd-Test_export.kurviger (1.4 KB)

Thanks for the detailed suggestions. They make my work as developer much easier.

Indeed that option is unnecessary with the shaping points and only causes maintenance troubles.

Everything else seems reasonable as well. I will check the algorithms and think for improvements.

If you indeed need to break existing functionality in order to accomplish this, I’ll withdraw my question for u-turn support. I really don’t want to get the whole forum on my head.

This is not necessary, it is a reasonable request.
Software can not progress unless we review it often and push it to its limits.

@rumbrummer thanks for thinking along. Very helpfull.
The different U-turns.

The “turn instruction display”, only contains street name info.
This keeps it compatible with the next realization.

I have a prototype working with e.g. (offline) GraphHopper (on and off route). It does reverse geocoding of user location and displays the street (at bottom). With Kurviger that could make sense only on the route (if route contains that data). Doing continuously online reverse geocoding does not seem a very wise solution? [Cruiser] 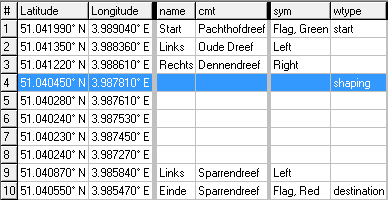 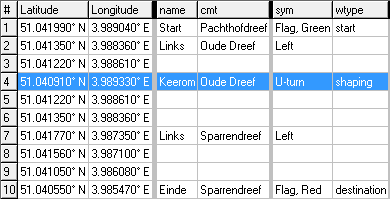 My proposal (perhaps to complex, as a discussion base)

In fact it is quite simple and also my thinking.

use Waypoint symbol (flag) for via points

BRouter did not generate either the [Waypoint name] instructions on waypoints.
I generate them myself when I post process BRouter routing:

BRouter does not generate turn instructions for waypoints. So BRouter routes don’t know waypoints, only start + end. That may concern navigation (reported here and here). We must post process & enrich BRouter results before use. Related to the feature:

Only Kurviger understands the usefulness of using both Via and Shaping Points @ navigation.
That’s why I’m here, even if I’m not a motorcyclist. The investment in this app: Peanuts
The pleasure you get in return is well worth the mini investment.

Available in Kurviger 1.14.12 (Beta) based on above discussion.

With my stupid mistake I kicked off a snowball … an avalanche has now arrived in the valley, without damage!
Thanks @Emux - good job! And thanks @0709 and @rumbrummer for being so though to represent all the technical stuff I know so little about. I think kurvigerPRO has once again become a bit better.