i hope it is ok, when i start an new topic for each idea, question?

i use navigation system since a long time, and one of the features i use very often on my tomtom or on other navigation systems is to switch between the navigation view and a view of the the rest of the route to the destination.
Especially in areas in which I am not very familiar, it is extremely practical if you can quickly get an overview of the rest of the route and then jump back to the normal navigation view. I thought that would work if you pressed the blue arrow symbol while navigating, but the system somehow zooms out, and when I press the navigation button again, it stays zoomed out. I found a similar function in a submenu: “Show the whole route”, but on the one hand I can’t get there while driving, on the other hand I only want to see the remaining distance and not the route I have already driven.

Is such a function integrated I just didn’t find it, or can you add such a feature?

i hope it is ok, when i start an new topic for each idea, question?

Thanks, that’s the recommended way to discuss / monitor new ideas!

when I press the navigation button again, it stays zoomed out

With auto zoom enabled, navigation will auto zoom after a while.

If drive and can handle the screen, why not zoom out with one of the available ways to see more route?

no auto zoom is disabled.
tapping to see what you want to see is a lot easier while driving, like trying to zoom properly and positioning the map.

i change from tomtom to kurviger, because i hate tomtom and his navigation, but this tomtom feature is for me very helpful. tomtom positions the rest of the route on the map so that it fits exactly on it.
one of the few things that work really well

Can you post screenshots of its UI step by step, so we can see how it does that inside navigation?
Or is it available in some online manual?

Oh it is very easy.
I have done two pictures.
First i have started a navigation. I drive a few minutes and you see the normal navigation screen: 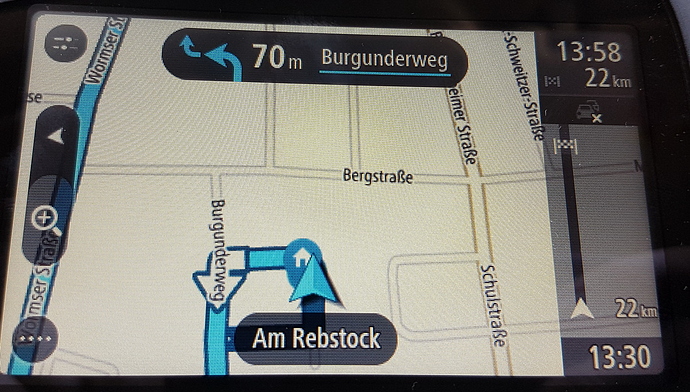 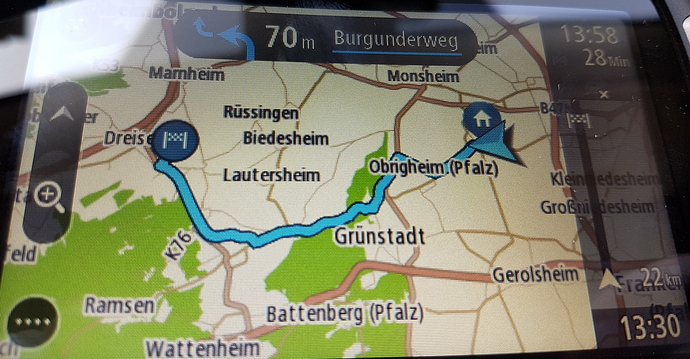 After push the arrow a second time, you are back in the normal navigation view like picture 1.

Kurviger app does have a feature that you can use for this purpose, although it is not exactly the same:

Kurviger app does have a feature that you can use for this purpose, although it is not exactly the same

Users still use that workflow successfully already, but it works fine with flexible navigation where can exit / resume route anywhere.

With strict navigation, cannot use that trick and stop navigation, as then should move start where would like to begin navigation again.

Flexible navigation has so many benefits!

Kurviger app does have a feature that you can use for this purpose, although it is not exactly the same

Precisely and such action seems to belong more on compass tap.

Probably via a menu to select navigation orientation in more detail: 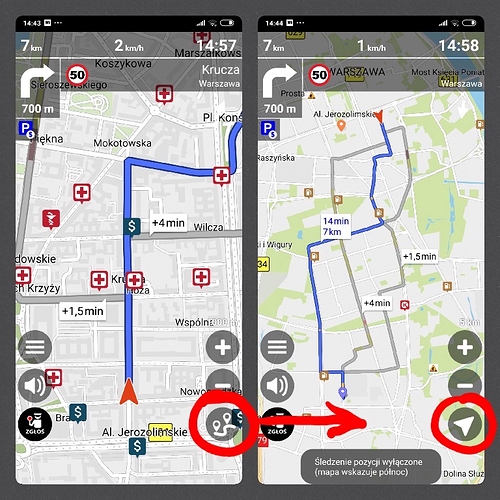 20200520_161715768×768 222 KB
In my favorite car navigation (Polish NaviExpert), this is solved just like TomTom, as @wernerz showed - along with the zoom buttons. After pressing this, the entire remaining route is displayed, and the map is positioned north up (relevant information is displayed in the pop-up notification). After a few seconds, it returns to standard navigation. A very useful solution.
devemux86 May 20, 2020, 3:55pm #12

Would be nice to not add more buttons on map.
There are still available actions in existing ones.

If you don’t want to change anything in the interface, then maybe a long press on the zoom-out would turn on the route preview for a moment? You probably won’t deny that it is a useful feature that is worth implementing

Seems more a navigation action, can be set on compass tap with a menu like above.

Not sure if should be via timer instead of a regular switch for those want it permanent.
So can change navigation orientation whenever it is needed and decided by the users.

At home, you can comfortably click everything. The problem is that you can’t press the miniature compass in the glove during the trip, not to mention using the side menu.

That’s why I opt for the maximum use of hardware keys; and the timer to return to the standard navigation screen. And that’s why I decided to use on a moto armored Panzer-Samsung with hardware navigation keys

For mode Route overview I would propose (just as a nice to have without any priority) an additional zoom factor to be kept, either as a slider for zoom percentages from 0 to 100% or some fixed overview modes (10%, 25%, 50%, 100% zoom)

Currently the algorithm calculates the remaining route’s bounds,
enlarged by around 150% to avoid buttons / panels at screen edges
and centers / zooms accordingly depending on device orientation.