The app does a great job of following a route, and rejoining it after a deviation. Sometimes a route will intersect itself (e.g. Kurviger), and the only way to know which route to follow, when the paths diverge again, is to look at the arrow and distance at the top of the screen. Sorry, I don’t have a screen capture.

One way to make this clear on the map would be to un-focus the part of the route that is not current, either by blurring it or making it a lighter shade of blue. Another way would be to add arrows into and out of a convergence of the route for the current section.

Thanks for the interesting ideas!
(moved in new features category)

Actually we have many plans for a more enhanced navigation.
e.g. colored past / current / upcoming paths with direction arrows

(image from my other project) 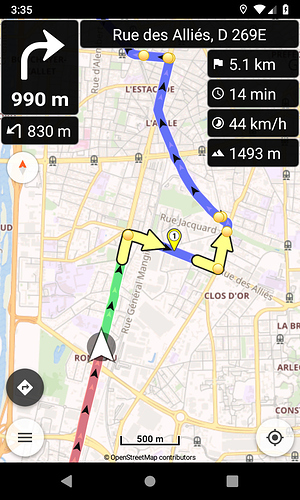 That looks fantastic. I’ll be happy to beta-test and critique it.

Note: this runs on a different project / engine, would need some implementation to integrate it here.

Hm sorry to be the only voice of dissent here but that screenshot looks a bit… colorful. Bit overkill I would say. I could really live with only the arrows and maybe a lighter shade of blue like Google Maps does for example, like @alwynallan suggested in the OP

That’s another project, don’t know how will be in Kurviger when time comes.
But everyone please post your thoughts!

Yesterday, when I was driving a route, I also missed directional arrows. Above all, if you work without waypoints, such as on a track, you can ask yourself, how the route continues now, especially in intersecting routes. However, the arrows should be considerably less than in the picture above. As with Basecamp it is enough, see picture. 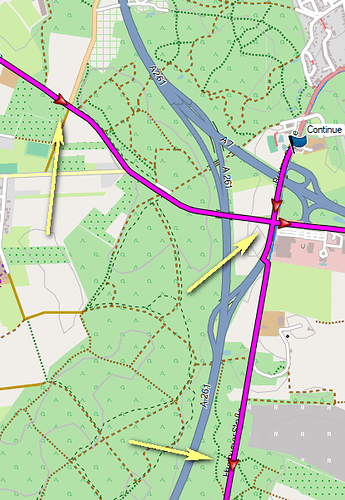 I need to see some OpenGL issues, but should be doable.

Testing some direction arrows on route:

It’s advanced OpenGL, so will be optional for unable GPU. 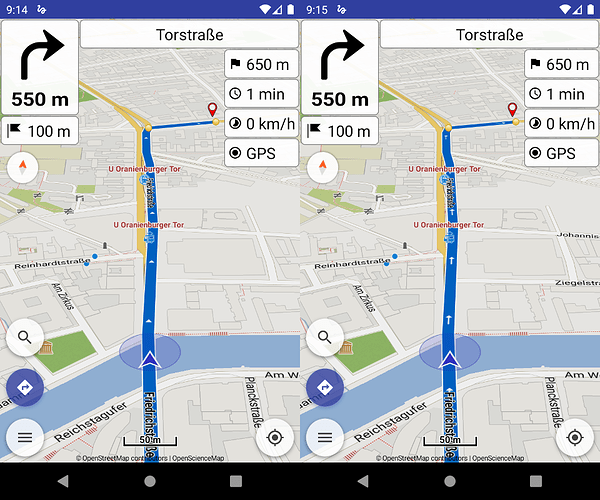 I prefer arrows. Much quicker and clearer to recognize. Pikes easily look like dots (without direction) when having a quick glance on the display while riding a bike (they even could be a little bit bigger).

I think you are right. While the pikes look better, the arrow is the better way to visualize this during navigation. 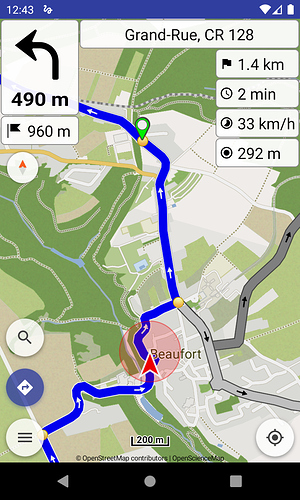 To improve some corner cases and avoid confusion with oneways, we can go with that appearance (larger clearer arrow heads): 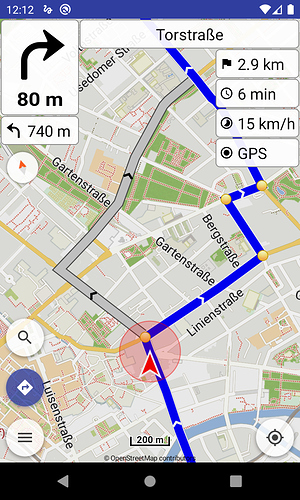 The latest Beta display is a big improvement. I have a few suggestions

Thanks for the feedback.

The direction arrows should be fixed on a line segment.

Could be in a future implementation (depends on OpenGL map engine).
Note that line segments change length while zoom, so arrows number.

While I ride the arrows move backwards, sometimes fast, and it’s distracting.

Only when auto zoom in / out, like map oneway arrows.
(that’s why they’re optional!)

However it is often incorrect, maybe showing distance/direction to the 3rd or 4th point on the route.

It shows the direction and beeline distance to the selected option in “Settings | Navigation | Reroute to”.

I think the arrows should be on by default, or even non-configurable.

It’s a new UI feature and with so many Android devices out there, better be conservative.

To improve some corner cases and avoid confusion with oneways, we can go with that appearance (larger clearer arrow heads):

Hmmm. In my opinion the former design was much better to recognize (especially when only taking a short glance on a small display - and having older eyes 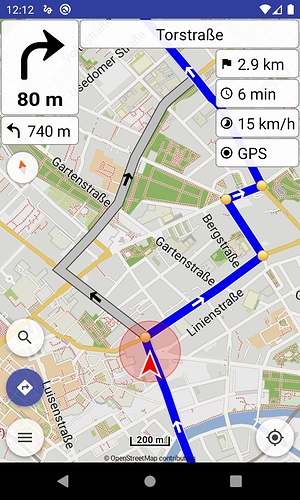 Note: similar long arrows are used already for oneways, so could be confusing.
And most navigators (e.g. OsmAnd) use just arrow heads anyway, so it’s more expected?

Also like explained previous implementation with long arrows could have issues in corner cases depending the GPU. Until I have some time to improve that, prefer to go with the most safe rendering.